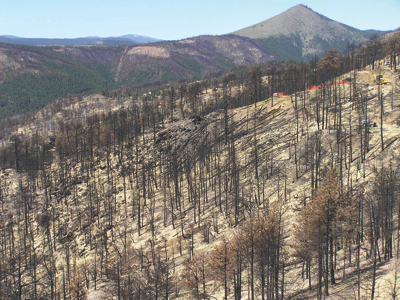 The message behind the results of new wildfire research is clear: It’s time for a new approach to managing wildfire in the West.

The study, out of the Earth Research Institute of the University of California at Santa Barbara, says that in many areas, contrary to popular belief among fire managers, there is actually a deficit of the most damaging types of fires. Incorporating these fires into wildfire management practices is “an ecologically desirable goal” toward restoring natural habitat and biodiversity. Thomas Veblen, a geographer at the University of Colorado Boulder and a co-author of the study, says the study and the response “are definitely going to fan the flames of this debate.”

The study says that, before fire suppression in the West began 100 years ago, most ponderosa pine forests and mixed-conifer forests (meaning a mix of ponderosa pine, fir and Douglas fir at low- to mid-elevations) actually had what’s called “mixed-severity” fire regimes — a mix of low, moderate and high-severity fires — including more high-severity fires than occur today. A “high-severity” fire burns on the ground and typically also burns the canopy or crown and kills more than 70 percent of woody species.

According to the study, wildfire suppression strategy across the West is based on the idea that before fire suppression, most of the region’s forests were “park-like” — with widely spaced mature trees, few or no dead trees and an open understory — and made up mostly of trees of similar ages. This park-like forest structure, the prevailing wisdom goes, is the result of a low- to moderate-severity fire regime. In other words, fires that only burn on the ground and kill anywhere between zero and 70 percent of the woody vegetation.

Veblen says that this now widespread wildfire suppression strategy was originally based on accurate but limited research in areas of Arizona and New Mexico, where it is indeed appropriate — but that “it became such a persuasive narrative” that fire managers have applied it to Western forests that don’t fit the model.

But dramatic increases in wildfire costs in recent years could open debate over changes to entrenched wildfire management strategy. Since 2002, the cost of federal wildfire protection and suppression has averaged more than $3 billion per year, with wildfire costs to states as high as $2 billion, according to

Headwaters Economics, a research group specializing in public land use in the West. But the fire-severity study suggests that incorporating mixed-severity fire into management goals could ultimately reduce these costs.

Of course, the study authors acknowledge that a fire management strategy that includes more high-severity fire is unlikely to be palatable to the general public.

“At root, I really think it is about the public’s understanding of this,” says Chad Hanson, director of the Earth Island Institute’s John Muir Project and co-author of the study. “They assume that [high-severity fire] is ecologically damaging, but that’s just not true. We don’t need to be afraid of fire in our forests.”

Intense fire-risk reduction, the study says, should be concentrated around homes to create a protective buffer around developed areas, while allowing fire managers to restore mixed-severity fire in public forests, where it was a natural part of the historic ecosystem.

Brian Rasmussen, a former Forest Service agent and a project manager for the Boulder nonprofit Wildlands Restoration Volunteers, says he moved to the wildland-urban interface to be in the “real world,” surrounded by native vegetation and away from man-made landscapes. But he is also cognizant of the risks.

“Just about everyone lives in a place that has some kind of risk of natural disaster,” Rasmussen says. “Most residents that choose to live in the wildland-urban interface will not have a fire burn across their property, however some will. It’s important for everyone to be ready, and accept the risk and mitigate the risk.”

There are signs that wildfire policy on the wildland-urban interface — a key part of the wildfire management conversation — may be ripe for dramatic change as well. The release of the fire severity study comes on the heels of the Wildfire Solutions Forum held in Jackson Hole, Wyo., in January, a closed-door summit where experts made radical policy recommendations for controlling the pace and scale of future development along the wildland-urban interface, with fire-risk reduction as the priority. Forum organizer Ray Rasker, director of Headwaters Economics, is consolidating the recommendations for a federal policy briefing in the springtime. The wildfire policy debate is so contentious — which is to say, regulating where people are allowed to live and how they are allowed to develop is so unpopular in most of the West — that all but a handful of forum participants have remained anonymous.

Veblen says that despite its potential, he is cynical that the new study will improve things, either for communities or for ecosystems. Already people seem to agree that increased development and climate change are exacerbating the wildfire problem, “but people continue to decide to locate their homes in fire-prone areas,” he says. “This is really a landuse problem.”