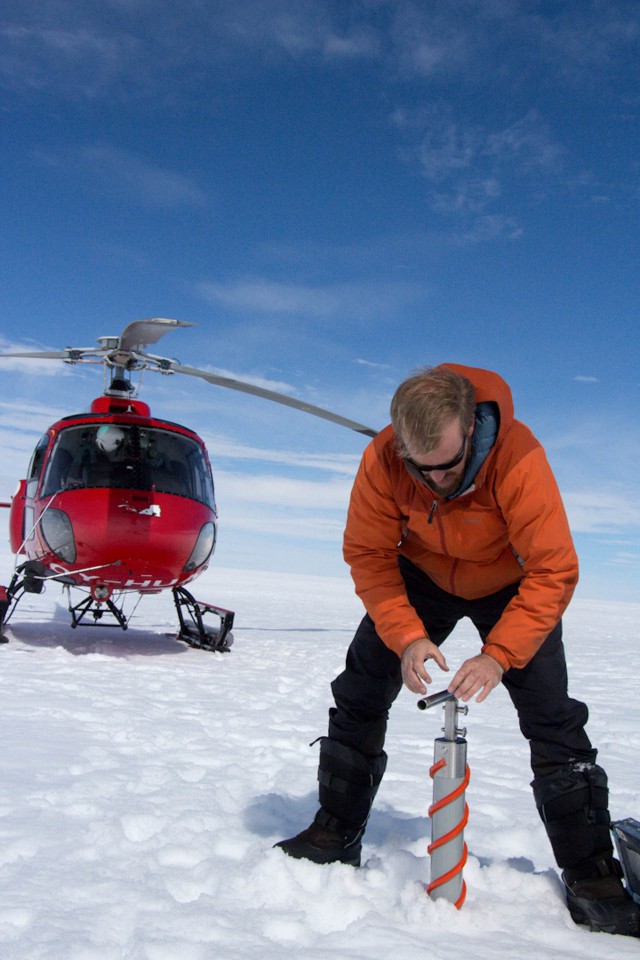 As the Dark Snow Project reached the end of its inaugural year, its director was feeling anxious.

“I was under a lot of pressure, because I had to prove that the project was not just a publicity stunt,” says Jason Box, climatologist with the Geological Survey of Denmark and Greenland (GEUS) and founder of the Dark Snow Project, designed to measure the impact of black carbon on the melting of the Greenland ice sheet. “I felt pretty nervous that unless I demonstrated some hardcore science, I would be forever branded as a kind of media whore.”

That’s because unlike typical scientific research, a media storm has surged around the Dark Snow Project almost since its launch: more than 30 articles swirled in the mainstream media — including a front cover story in Rolling Stone — not to mention a flurry of Facebook, Twitter, Kickstarter and other social media campaigning. And this is because, unlike most scientific endeavors, Box and his colleagues decided to crowdfund the Dark Snow Project, using the Internet to garner small donations from vast numbers of people. After an initial research grant, Box raised nearly half of the project’s $120,000 budget through crowdfunding.

“We brought the story to the people instead of staying in the conventional science box,” he says.

And it’s a fascinating story. It begins in the summer of 2012, a time when Box’s native home of Colorado was experiencing record-high temperatures and choking through a record number of destructive wildfires that burned thousands of homes and hundreds of thousands of acres, spewing plumes of smoke and soot into the atmosphere. Meanwhile, in his adoptive home of Greenland (or rather, his research playing field of nearly 20 years — Box currently resides in Copenhagen, Denmark), unprecedented temperatures were causing massive melting across the ice sheet. During one exceptional period in the summer of 2012, the entire ice sheet surface was melting simultaneously, even up at its maximum elevation of 10,600 feet.

From the ground and via satellite, Greenland’s surface ice and snow looked dark. Box wanted to find out how much of that darkness was black carbon — the partially combusted dark-colored particulate matter that emits from industrial smokestacks, vehicles, ships, aircraft, agricultural burning and, of course, wildfires, more commonly referred to as soot — and how much it was contributing to the startling melting in Greenland.

In a landmark 2013 study, scientists called black carbon “the second-most important individual climate-warming agent after carbon dioxide.” They estimate that black carbon contributes more than twice as much to global warming than previously thought, and has about two-thirds of the overall effect of carbon dioxide, the largest artificial contributor to climate change. If measured per unit of mass in the atmosphere, black carbon can absorb a million times more energy than carbon dioxide. The EPA estimates that the U.S. emitted 0.64 million tons of black carbon in 2005.

By darkening the surface of the earth, black carbon decreases the albedo, or a surface’s ability to reflect light back into the atmosphere. Scientists say this may have contributed toward earlier onset of seasonal melting, thinning Arctic sea ice and other signals of a changing climate over the past century — including the melting of land ice, such as that in Greenland. When it falls on ice and snow, black carbon drastically reduces surface albedo, meaning that the darker surface absorbs more sunlight and causes the snow and ice to melt. As the darker-than-snow melt water spreads across the whiter icy and snowy surfaces, it heightens the effect of the black carbon: even less sunlight is reflected away, even more sunlight is absorbed and surface melting continues to accelerate. In the summer of 2012, this became a runaway process across the entire Greenland ice sheet.

Flush with more generous crowdfunding than expected for the 2013 expedition, Box and the Dark Snow Project team trekked across the Greenland ice sheet to drill for the answers to their question of just how much this process contributed to overall melting. They drilled at three different locations of varying elevations, even making it out to their prime target site at 8,600 feet along the topographic divide. This meant a risky helicopter ride and a strategic refueling site at about the halfway point, set up in advance via snowmobile.

The team drilled more than 10 ice cores across the three sites, drilling as far as nine feet down — enough to read the evidence from the unprecedented 2012 melting. In the ice cores from the highest elevation site, the team found a well-defined melt layer exactly where Box expected it to be, about six feet below the surface. They also found the dark snow they thought might have contributed to the melting.

“We got a black carbon concentration at the 2012 layer, which we needed to be able to calculate how much of the absorbed solar energy we can blame explicitly on black carbon, and how much we can pin simply on the heating effect, which makes ice crystals rounder on the edges and helps them to absorb more sunlight,” Box says. “With those numbers, I calculated what fraction of the energy of melting, and ultimately what volume of melt water, was attributable to black carbon.”

By the time he presented his preliminary findings this past December, he had the compelling results he needed to prove that the Dark Snow Project had weathered the media storm.

“Compared to pure snow without any light absorption impurity, the difference was 40 percent. Four-zero,” Box says. “You could say that without black carbon — if there were no black carbon — there probably would not have been complete surface melting on the ice sheet in 2012.”

Black carbon can travel vast distances through the atmosphere before it lands on the Greenland ice sheet, even from as far away as wildfires along the Colorado Front Range. In July 2013, just days after the team had finished taking its core samples, black carbon fell on the Greenland ice from intense wildfires in Quebec, more than 2,000 miles away. While that soot didn’t make it into the first ice core samples, Box and his team are working toward tracing every bit of black carbon back through the atmosphere and to its origins.

That’s one key goal moving forward — but the 2014 expedition is also adding a new element to the Dark Snow Project.

“Here’s the thing: a lot of the darkness is not black carbon. It is algae,” Box says. “And that’s especially true at the lowest elevations, where most of the melting happens.”

Biologist Marek Stibal, part of the Dark Snow Project team and also a member of GEUS, says that these algae produce a pigment, probably to protect themselves from excess solar radiation, which may damage their DNA or disrupt their ability to photosynthesize.

“At high cell densities in the surface ice, this pigment can visibly change the color — and reduce the albedo — of the ice surface, and this can then mean more melting,” Stibal says. “More melting means more liquid water for the algae. And all living organisms are dependent on liquid water, so it potentially creates a positive feedback loop.”

The new phase of Dark Snow Project crowdfunding will focus on the importance of figuring out how the increased melting is affecting algal growth — as well as other microbial growth — and the extent to which algae and microbes are contributing to the dark snow effect.

Box and Stibal are even planning a study to test whether pollutants like black carbon may be fertilizing these other microbes — dark snow breeding dark snow.

“I like to call this the climate X-factor, because we don’t know how important it is,” Box says. “We know that the reflectivity at the lowest part of the ice is a lot darker because of the microbes. We just don’t know by how much.”

By the summer of 2014, the biologists and climatologists of the Dark Snow Project hope to combine their expertise to find out.

“Together we’re going to crack this thing open,” Box says. “I think it’s going to be really high-impact.”

More details about the study on black carbon in
Greenland’s ice is available on the International Geosphere- Biosphere
Programme’s website, at http://bit.ly/1lPE96C.