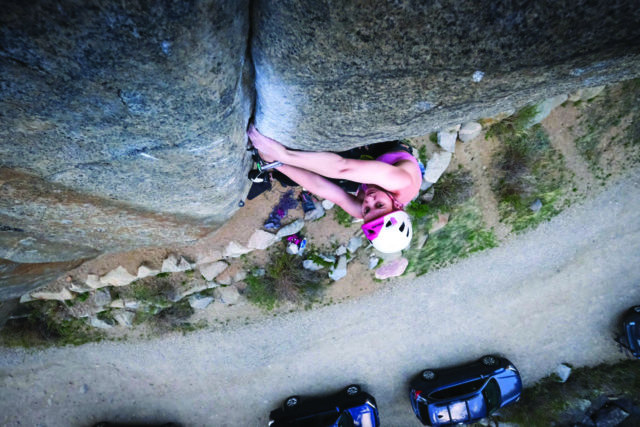 There was nothing Molly Mitchell could do as her grip slipped above the crux of Crank It, an insanely challenging 5.13d-rated route she’d been trying to conquer for weeks. There was even less she could do when she felt her hips jerk as the first piece of trad climbing gear ripped out of the rock, and the second, and then the third.

She fell 30 feet and hit the ground, squarely on her back, breaking her spine in two places.

“I knew something was bad,” she says. She didn’t move. She tried not to panic. But it was hard to control her thoughts. “Honestly, when I hit the ground, I was like, ‘I don’t even want to climb anymore’ . . . I was just thinking, ‘I need to find a new career.’”

However, Mitchell, who’s been obsessed with climbing since she was little, and who had successfully bagged other, similarly difficult routes before, was far from through with climbing. In fact, two years later, in May of 2022, she would return to Crank It, to not only conquer the route itself, but to come face-to-face with her trauma.

Mitchell is from Atlanta and first moved to Boulder in 2011. She’d found climbing as a girl with her father on a trip to Yosemite, where she tried top rope climbing for the first time. But it wasn’t until she turned 16 that she had the freedom to drive to the nearest climbing gym with any regularity.

“I was doing track at the time, and I hated it. I was so bad at it,” she says. So with a driver’s license and vehicle at her disposal, “I convinced my parents to let me go [to the climbing gym] basically every day after school.”

She met a group of new friends, a community of climbers and a coach who invited her to train with the gym’s club. She was a natural in every sense of the word. Mitchell is tall, with long arms and long legs—the ideal build for a strong rock climber—and more than that, she had talent for scaling challenging routes. But it wasn’t the routes that would get in her way, so much as her own battle with anxiety and other mental health issues.

“I didn’t know if I could be a professional [climber], I just wanted to get better,” she says. “But also I put too much pressure on myself . . . [I had] to learn how to have compassion for myself in those situations where I freak out and I don’t understand why.”

Even during those early days in the gym, Mitchell remembers highs and lows that challenged her as much as any rock walls ever would. Sometimes she’d get so frustrated when she failed she says she’d push away from the sport—eventually, though, she’d always end up swinging back to it.

It wasn’t long after Mitchell first moved to Boulder in 2011, that she was introduced to trad climbing in Eldorado Canyon and fell in love. It was something that challenged her anxiety as much as her mind and her body. Trad climbing gave her something to overcome in place (or in spite) of those mental blocks. She dove into the sport headlong and with her natural knack for climbing she eventually started reaching out and getting sponsors like Adidas, Five Ten, Edelrid, and Climb On! She moved to Vegas in 2016 and crushed several 5.13 sport routes that few women her age had ever completed. Then, moving back to Boulder she set her sights on the next high point: China Doll, a two-pitch 5.14a (since downgraded to a 5.13c) and one of the hardest routes in Boulder Canyon.

“I was feeling kind of down for a while when I moved [back] here. I was going through, like, a lower point and then I found the goal of doing China Doll,” she says. Mitchell started working on the challenge in May 2019 and finally “sent it” in September, doing both of the route’s pitches on gear individually and then together as one. Not only did she become the seventh woman in the world to climb a 5.14, but at 27, she tied for the youngest woman to ever complete such a challenging pitch.

She felt on top of the world—for a while. Then, again, she felt herself slipping back into a depressive state. It’s a mental cycle that she’s become all-too-familiar with and that’s defined her inner struggle through her budding career: She goes up working toward a goal and comes down hard when it’s over. She starts right back up again once she’s set her sights on a new challenge.

By no means is this struggle her only motivation to climb, she says; but it’s certainly a factor.

Which led her again to Boulder Canyon the very next summer, to a 5.13d route that would change her relationship with climbing forever.

“My original goal was to do Viseroy, which is the extension [to Crank It], which is a [5.14b]. And then I realized how heinous Crank It is,” she says. “Crank It has this horrendous boulder problem in the beginning of it.”

She describes how one has to grab these awkward, greasy cramp holds, “And then you have only one foot, and your right foot is slightly far away and pretty high. Then you have to lunge into an iron cross move with your hands on this really shitty pocket that’s blocked by a roof.”

Translation: it’s a wicked hard start. And it doesn’t get much easier from there.

Mitchell worked on the route all through the spring and summer of 2020. It kept her occupied and gave her something to stay focused on. She almost made it to the top of Crank It in August, but fell right after the crux of the climb. Then, on Oct. 1, 2020, she almost made it again, climbing up to the same exact spot just above the crux, and just as had happened months earlier, at almost exactly the same spot, she slipped and fell. But this time, her gear failed from 30 feet up.

“I hit the ground and it hurt,” she says. “But luckily I landed on that pad.”

Just over a year prior, the climbing community had lost another professional climber named Brad Gobright in a rappelling accident. That fatal fall was why Mitchell chose to use a pad that day, and it likely saved her life.

The paramedics were on scene shortly. Mitchell was rushed to the hospital where they discovered her L2 and L3 vertebrae were broken. But the fractures weren’t as bad as they could have been, Mitchell admits; she could still move around and she didn’t need surgery. The emotional recovery, on the other hand, is something she’s still very much dealing with to this day.

“Getting back to climbing was the hardest. I definitely underestimated how much the trauma would affect not just scarier climbs, but even easier climbs,” she says. “It’s annoying when I freak out at something that’s obviously stemming from the trauma of my accident.”

Mitchell recently remembered (through the haze of her opiated early-recovery), that on Oct. 3, just two days after her accident, Topher Donahue, a local climbing legend, reached out to her and planted the seeds of redemption in her mind.

“He called me and he was like, ‘Well, if you think about going back, we have some options for what we can do to minimize the risk,’” she recalls. Donahue gave her detailed advice for how to make the approach and strategize setting her gear. It was good beta, she says. And it got the wheels inside her mind spinning.

Mitchell pushed through a lot of mental and personal hardship. She did physical therapy, and was eventually able to ditch her back brace, and in no time at all she was training again. Training to go back and top out on Crank It once and for all.

Now, she over-analyzes her gear, striving to set her nuts and cams perfectly, fighting not to let her anxiety and PTSD get the better of her. But no matter how secure her gear is, she says, “if I feel like I’m ripping out, that’s what brings me back. I can still feel when I first fell and those pieces came out, those hip thrusts . . . it’s just like, ‘oh, shit.’”

The fall had scarred her relationship with the one thing she’s always been able to rely on, to grab hold of when she’s feeling down and pull herself back up with.

Mitchell returned to Crank It the spring of 2021 (yes, that soon) and started training on it again, meticulously planning her gear and approach, and building up toward a radical moment of redemption.

Which she got that June, a full 20 months after her accident, when she made her final attempt. This time she pushed the climb aggressively, as hard as she could, checking her gear manically as she went, the thought of falling again smoldering at the back of her mind. She breezed past the crux, up past the anchor points where her gear had ripped out, past the greasy granite holds she’d lost her grip on when she’d fallen before, and finally, after two long years of trying, she topped out on Crank It.

The feeling was unlike anything she’s ever experienced.

“It was crazy. I roared. Like, I screamed like an animal,” she says. Then she started crying. “And then I felt like puking . . . and then I was like, ‘I’m a badass!’ It was this range of emotions.”

All of which you’ll be able to see in Cedar Wright’s forthcoming documentary about Mitchell’s journey. The Boulder-based climber/filmmaker documented Mitchell’s recovery and come back, and is editing the movie now with a plant to release in spring 2023.

“It was her winning a pretty serious mental-health battle that was the most impressive to me,” Wright told Climbing Magazine. “Molly had to overcome serious anxiety and PTSD, amid a ton of scary moments, to make this climb happen.”

“Overcome” is a strong word though, Mitchell says. She’s still very much struggling with that trauma and her own mental health battle. She still feels those pangs of terror when she tests an anchor, and falls with all her weight on one. She’s still fanatical about her anchor placement, overanalyzing every single one, sometimes to the point of freaking herself out.

“It’s not like now that I did this route I’m just not scared anymore,” she says. “Even if it’s not logical to be scared on [a] route . . . I still second guess myself.”

And perhaps not surprisingly, she’s still struggling with the lows she inevitably feels after such a high.

“I think maybe I’m just hard on myself, but it’s been kind of weird . . . it’s definitely like you lost something that was your focus for two years,” she says. Once again, Mitchell finds herself feeling kinda’ blue. But now, at least, she says she’s starting to understand herself and the ups and downs of her mental health struggle a little bit better.