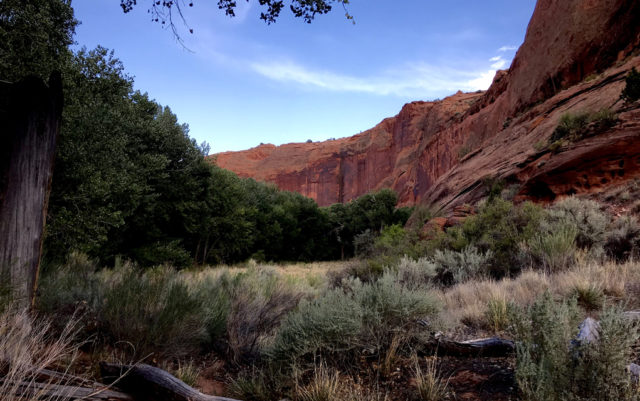 On a ridge overlooking the Escalante River, nine people — seven teenagers, two adults — huddled together screaming, “I am human!” into the open space that had been carved over the millennia.

One by one, we roared into the expansive system of red rock monoliths, delicately cut arches and ancient veins rising up from the desert floor — an impeccable aesthetic for a “barbaric yawp,” as Walt Whitman would say.

We were small, that was obvious, but we felt infinite. We had been stalked by coyotes, battled our way through quicksand and faced an endless assault of low-lying branches and high-standing brush as we made our way to the ridge via a nearby wash. We had laughed, cried, grown and argued our way through thick and thin for the past four days, and now we stood at the climax of our adventure, in a moment of complete acceptance of space and time.

There on the ridge we surrendered ourselves to the universe. We conjured all our pain, suffering and sadness, bringing forth suppressed feelings by meditating on our individual experiences — experiences that kept most of the teenagers in a constant state of anxiety and fear.

I was working as a guide for a wilderness therapy program in Utah. The screaming was actually a ceremony of sorts. As guides, we worked eight days on, six days off, and for those eight days we would go on a variety of trips doing activities such as rock climbing, mountain biking, canyoneering or backpacking. We tended to use ceremonies like this once or twice during a trip to celebrate major accomplishments or to bring the group together, igniting feelings of unity with one another through emotional vulnerability in a safe and supportive environment.

Most of the students I was guiding that week with my co-guide, Emily, struggled with different forms of anxiety, depression or substance abuse. On other trips, guides might work with students with Oppositional Defiance Disorder, Autism Spectrum Disorder or, as they say, “failure to launch” — the inability to make responsible decisions to progress one’s life. Students come from all over the world, but mainly the U.S., to stay for eight to 12 weeks on average, returning from their trips to a basecamp once a week to meet with a therapist.

They sleep and live outside the entire time.

We’d been sent to Glen Canyon Recreation Area near Grand-Staircase Escalante National Monument for our trip and had made our way down a little-known wash as we headed toward the Escalante River. The Escalante is a pristine, meandering tributary in the midst of an endless plain of canyons and desert only contained by the high reaching aspens of Boulder Mountain to the north, Lake Powell to the south and the Kaiparowitz Plateau to the east. It’s one of the most remote areas in the United States; unmatched beauty with little tourism.

Wilderness therapy is often a last resort and difficult decision for many families. By removing them from their home environments, students are given the ability to spend a couple months solely focused on therapy. Often forced into the program by their parents, students frequently told us they didn’t want to be there. This week, however, the boys were all enjoying themselves. They’d never seen anything like this place and felt like they were exploring a whole different world.

We’d started our hike three days earlier at a small trailhead an hour’s drive into the desert from where Hole in the Rock Road breaks off Highway 12 near Escalante, Utah. What had been a dry wash on a level desert floor with emerging rock formations slowly began to transform. The walls began to rise, water began to flow, and trees grew more dense, lush and full of blooms. At 200 feet tall and 150 feet wide, the wash had turned into a canyon. We followed it, isolating ourselves from the great big world that existed somewhere beyond those rolling edges.

As daylight faded and night settled in on the first day, the students, reluctant to go to bed, demanded we keep walking. Eventually, Emily and I caved, giving our students agency to decide. Wilderness therapy is all about fostering healthy coping mechanisms, building trust in yourself and others, and allowing students the ability to choose for themselves. Because their desire was grounded in enthusiasm, we let them continue.

Nine tiny circumferences of light guided our way as our world quickly turned into a tunnel of  brush, dirt and fallen trees. We pushed away sticks and leaves, leaping across the river from time to time, always determined to stay out of it.

When the banks of the river began to rise and the canyon narrowed, we had no choice but to take the more direct, wet route. Barely 10 minutes after stepping into the river, one of my students suddenly dropped to his waist in quicksand.

As a guide, I have many roles, but three of them overpower the rest. The most important role is to keep the students safe. The second is to have fun. The third is to advance their therapeutic process. Some people will argue about the order of the latter two, but I believe that therapeutic progress is dependent on fun. Keeping them safe, however, carries the most weight.

After making sure he wasn’t still sinking and the rest of the group was safe and accounted for, I got to work. Asking two other students to help me, we laid down three sleeping pads on top of the quicksand in order to expand the surface area and prevent ourselves from sinking in with him. It took us two hours before I finally managed to tie paracord to the loops on the back of his boots.

The two boys helping me were now standing, ready to pull as I freed up the little space I could above his heels. Quicksand is a lot like liquid cement, a constant suction holding you in, immediately filling any space available. The best way to get a foot out is via the same motion you would pull your foot out of a shoe.

“Thank goodness,” I cried, almost collapsing into the river as his left and then his right leg popped out of the muck. The rest of the group, although slightly panicked, cheered and welcomed their fellow hiker back to dry ground.

Looking down at one boot and a wet sock, the newly liberated student looked at me and then back at where he had been. Murky water stared back at us. We realized his boot was still two feet deep.

Quicksand, it turns out, is everywhere during certain seasons. We were there in July after it had rained the week before. Because we couldn’t hike without his boot, we called it a night and went to bed. The next day we got up, built a dam, diverted the water just enough to dry out the quicksand and started digging. After reaching the boot, the student dumped out the sand, and we filled in the hole, scattered the dam, and got on our way, several miles behind schedule.

Although this was just one of many experiences that scared us to varying degrees, it was an important one for the group. Only eight hours after leaving the trailhead we were all shaken by the reality of our current environment. The darkness, the isolation, the student stuck in quicksand — it all brought up emotional responses, fear from a lack of control.

The student was scared because he was stuck and couldn’t get out. Emily and I were scared because we were responsible for him and at times felt like he might never get out. The rest of the students were scared because it could have been them and they had no clue what to do. Understanding that they were scared was important, but understanding why they were scared is what they came to learn. It’s the ability to learn from an emotional response instead of merely reacting to it that often helped students create awareness the next time similar feelings came up. That awareness often allows people the ability to recognize the emotions behind their behavior and amend that behavior in the future.

During that trip, I saw people change and self-confidence grow. Together we indulged in bandana-filtered mud water and hiked sandy river banks in mud-caked boots and 50-pound packs. I’ll never know if they remember this trip, but I certainly do. I remember it because I saw seven ragged, dirty, wild-looking, kind-hearted, struggling teenagers take hold of their own agency.

They came to Utah to address real struggles preventing them from living up to their full potential. I will remember because I watched them acknowledge, one by one, that although they were seemingly small and powerless compared to what surrounded them, they were still human.