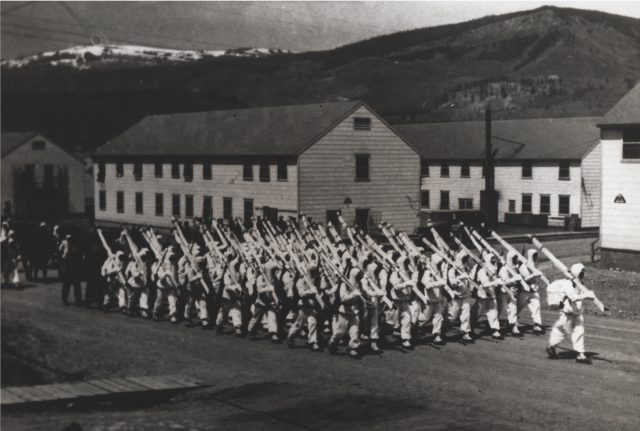 After a grueling campaign that killed or wounded thousands of its members, the 10th Mountain Division of World War II marked Germany’s surrender to the Allied Forces in May 1945 the best way they knew how: with a ski race.

Using a cache of captured Third Reich ski gear, the contest was held on the slopes of Mount Mangart in the Julian Alps along the border between Italy and modern-day Slovenia. For an experimental infantry unit trained as skiers in the Colorado Rockies, the snowy celebration was a fitting end to a devastating war.

Nearly 80 years later, the soldiers and their commemorative race are the subject of a documentary by Colorado filmmaker and ski legend Chris Anthony. Currently on a screening tour stretching from Austria to Aspen — with a Denver stop scheduled for Nov. 3 — Mission Mt. Mangart tells the untold stories of the 10th Mountain Division and their crucial efforts that marked a turning point in the war.

“Their assaults on Italy were just legendary,” says Anthony, who was inducted into the Colorado Snowsports Hall of Fame in 2018. “And even though they were one of the youngest mountain divisions, what they did during World War II is amazing.”

The path to the film began during one of Anthony’s yearly ski trips to the Julian Alps. After recognizing the professional skier’s name in a local newspaper article, retired Slovenian Brigadier General Janez Kavar reached out to discuss the efforts of the 10th Mountain Division and his country’s annual ski race taking place each year in their honor.

“He wanted to get this across to somebody that [Slovenia] celebrates [the 10th Mountain Division] because it’s when America came and helped liberate [them],” Anthony says. “I could see his passion, and I felt obligated to do something with it.”

Much of this was news to Anthony, who lives about 40 miles from Camp Hale where the 10th Mountain Division was trained. After exploring the region with Kavar during his next visit, he returned to the U.S. to pitch the film idea to multiple studios. All of them declined. The party that showed the most interest in the story was the government of Slovenia.

“The Slovenians were so loyal to this story, and were so supportive of doing anything they could to share the story with me,” Anthony says. “They flew me around in helicopters. Basically, I had the whole country to get the story forward.”

This marked the beginning of a six-year journey that Anthony took in order to tell the story of the 10th Mountain Division. Anthony used the filmmaking knowledge he learned at Warren Miller Entertainment — the production company of the eponymous American ski and snowboarding filmmaker — to piece together the documentary.

“I used every bit of [that] knowledge to pull this off,” Anthony says.

The skier and filmmaker, who grew up in Denver’s Five Points neighborhood, now screens the documentary at schools as a part of his Chris Anthony Youth Initiative Project. The story of the 10th Mountain Division helps Anthony stress the impact skiing had on him as a child growing up on the Front Range.

“I definitely ran into some trouble as a kid as all kids do, and thankfully my parents, who were struggling at the time, worked part-time jobs at ski areas so that’s how I got to ski,” he says. “That helped keep me out of trouble.”

But when it comes to the broader story of how skiing helped defeat the fascists in World War II, it’s not just Anthony and his film audiences who are recognizing the efforts of the 10th Mountain Division. Earlier this month, President Joe Biden visited Colorado and designated the unit’s Camp Hale training site as the first National Landmark designated under his watch.

“It’s long overdue,” Anthony says. “It’s a massive part of our history … [and] a lot of what they did got buried in the closets.”