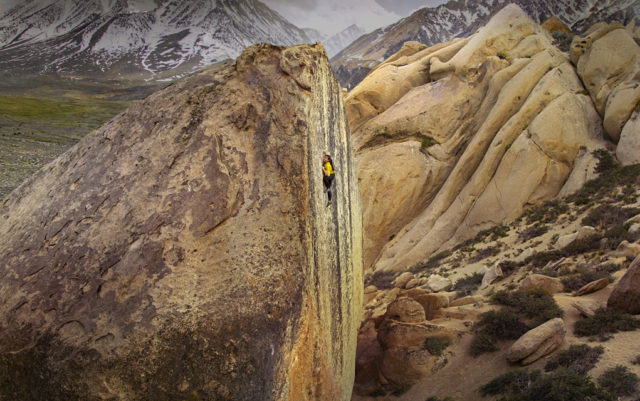 When you fall from something taller than a door frame, don’t tense up, don’t get rigid. As airy nothingness swoops in, however suddenly, and ushers a sense of complete unknown, look down at the ground. Stare at the very spot you will soon hit. Exhale a sharp breath. Release all tension in your chest. As the ground quickly approaches, tuck in your limbs. Let your body crumple. “Or else,” Nina Williams says, “something will break.”

The 29-year-old professional climber — famous for completing some of the world’s most dangerous boulder problems (most often as the first woman) — has been practicing the art of falling ever since she took up climbing 17 years ago. “It’s a skill that can be built up,” she says, and mastering it was what cracked open the door to the elite and exclusive world of high-ball bouldering.

In Spanish, “high ball” translates to “tsunami,” an overwhelming wave. Some of the most famous high-ball boulders are more than 45 feet tall. Imagine a free-standing stone so giant — the height of a three-story building — that, looking up at the top from its base, you stumble backward.

Imagine picking your way up its cold-hard face, moving between razor-sharp ripples, digging your nails into its tiny divots, smearing your feet across sections of smooth nothingness, pressing your toes into the smallest of crevices, inching your way to the top, with nothing between you and the ground dozens of feet below.

“Ambrosia” (V11), the bouldering line that catapulted Williams to international climbing fame in 2018, is 55 feet tall. Also clocking in at 55 feet is “Too Big to Flail” (V10), the line that forms the climax of The High Road, a documentary film starring Williams, and part of the REEL ROCK 14 2019 tour, which premieres in Boulder on Oct. 17.

Every year REEL ROCK, the global climbing film festival Boulderite Peter Mortimer co-founded in 2005, tours a collection of climbing documentaries around more than 500 locations in 40 countries. This year’s tour also includes “The Nose Speed Record,” which chronicles Alex Honnold and Tommy Caldwell’s race to establish the fastest-ever ascent of Yosemite’s most iconic big-wall line. Also featured is “United States of Joe’s,” a film exploring the clash of two cultures — a “ragged band of punk climbers” versus a “conservative community of Mormons, cowboys and coal miners” — at Utah’s famous bouldering destination, Joe’s Valley.

Set in the Buttermilks, a jumbled assembly of famous, massive boulders at the feet of California’s Eastern Sierra mountains, The High Road is Williams’ debut as a REEL ROCK star.

On the popular climbing website Mountain Project, site administrators give “Too Big to Flail” a safety rating of “X,” indicating the potential for death if a fall should occur. The first ascensionist, Alex Honnold, stacked 36 crash pads (portable foam mattresses) at the base of the big boulder, which rises dead-vertically from a sandy ravine like a giant overturned Hershey’s kiss. The next person to climb it stacked 30 pads. “You choose the number,” the website reads. Williams, the seventh person and first woman to top out “Too Big to Flail,” guesses she, too, piled around 30.

Climbing these high-ball boulders requires the technical rehearsal of elite bouldering and the pure audacity of free soloing. Williams started climbing competitively when she was a 12-year-old kid in Rhode Island, a state with no mountains but a precious collection of granite boulders. For years she climbed all over New England, eventually competing in bouldering gyms at a national level, though outdoor rock-climbing quickly became her obsession.

At age 19, she dropped out of college at the University of Rhode Island and, in 2009, she started working on her first high-ball project, a 30-foot route called “Speed of Life” (V10) in Massachusetts. After six years of intermittent attempts, she was the first woman to reach the top.

“I fell a lot on that climb,” she says, which whittled away her fears and taught her safe landing techniques. “If you don’t have to think about the fall, then you can focus entirely on the climb itself. … Once I moved on to some of the taller high-balls in [the Buttermilks], it became less about the falling length. It became more about the process and the system of trying.”

Over the years, Williams has developed a systematic approach to high-ball climbing. First, she tries all of the moves while safely tied into a rope, familiarizing herself with the route. (Most big boulders have at least one gentler-sloping side, so you can scramble easily to the top and secure a rope over its steeper faces.) She does this over the course of days or weeks, sometimes years, practicing over and over again until she nails each move. Then, as she starts piecing the route together, seamlessly transitioning between each move, Williams pivots focus away from the physical challenges and toward the mental one. In perfecting a performance where one mistake means death, absolute calm and confidence is essential. For Williams, that means trusting herself.

“When I’m up on the wall, if I’m scared, then I have no business being up there,” she says. She waits until she has flawlessly rehearsed the climb numerous times. Then she unties the rope, gets a good night’s sleep, returns to the boulder in the morning, takes a deep breath, looks up and, if she feels right, goes for it.

“When I am up there, I feel completely calm,” she says. Her mental strength is the accumulation of her confidence over time. “I trained to feel a little bit of fear every time I went up a climb. But then instead of ignoring that fear, or trying to pretend that it didn’t exist, I just allowed myself to feel it and to become familiar with it so that the next time I went up, I was able to take on a little bit more of that feeling, until I was just moving onto bigger things,” she says.

“It’s a process that’s really systematic and it’s applicable to so many things in life, where you take this really big goal, which can feel impossible, and then you just break it down into these smaller goals.”

Since moving to Boulder in 2010, Williams has topped a few local (non-highball) testpieces. She was the fourth person to ascend Flagstaff’s “Window Shopper” (V12). And, as one of only three dozen or so women in the world to climb V13, she’s completed “The Shining” and “The Automator” two V13s in Rocky Mountain National Park.

Williams’ decade-long pursuit of daunting boulders has taught her how to reframe her performance potential, both on and off the rocks. “There were so many things I told myself that I wouldn’t do in climbing because I wasn’t good enough, or talented enough, or whatever,” she says. “But then I ended up doing them. And I was like, you know, I want to apply those lessons to something other than climbing just to enrich my life a little bit more.”

So, she decided to go back to college. In September 2019, Williams enrolled full-time at the University of Colorado Boulder, dissecting the process for her bachelor’s degree in communications, just like she’d learned to do with her climbing goals. “School has always been a fear of mine because I’ve told myself I’m not smart enough to finish it. But you know, that’s a bunch of bullshit. That’s just the gremlin voice inside of my head telling me that I can’t do something,” she says. “So I’m just trying to go out and prove it wrong.”