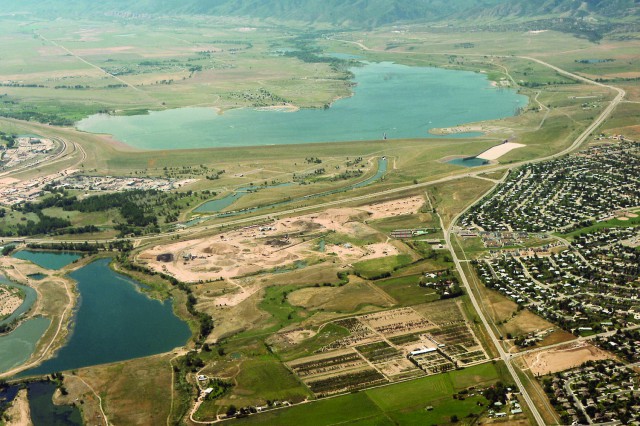 If you’ve ever spent time around one of Colorado’s rivers or streams during spring and summer runoff, you’ve had a taste of nature at its best. Supercharged, ionized air, forest and wildflowers, and, above all, massive torrents of water sweeping from the high Rockies out into the plains, or through sandstone canyons toward the distant Pacific.

Long before humans harnessed electricity, they sensed the power of moving water and found ways to make use of it — think of those ancient waterwheels, turning massive smoothed stones to mill grain. As long as 2,000 years ago, Greeks used the energy of moving water to saw wood and power textile mills.

In the late 1800s, at the dawn of the industrial age, clever engineers finally figured out how to hook connect a brush dynamo — a type of electric generator — with a turbine to generate power for storefront and theater lighting in Grand Rapids, Mich. Within a few decades, hydropower became a key source of energy in the U.S. and around the world — more so in countries like Switzerland and Austria, which built numerous high alpine reservoirs to feed hungry turbines, and in Scandinavia, where plentiful precipitation sustains large rivers year-round to run hydropower operations.

In the U.S., solar and wind get all the glory these days as renewables, but hydropower has long been the number one source of renewable energy, providing about 7 percent of the country’s total electric power. If all that juice were generated by fossil fuels, it would add another 200 million metric tons of carbon emissions to the atmosphere. While the U.S. is the fourth-biggest producer of hydropower in the world, it lags on a percentage basis. Austria generates 47 percent of its power from hydro, and Norway is the world champ, at 99 percent.

But that number could go up in the U.S. and in Colorado in coming years. New technology and engineering will make existing hydroelectric operations more productive, and there’s still plenty of untapped hydropower potential — up to 3.8 gigawatts in Colorado alone and up to 65 gigawatts around the country, according to a new U.S. Department of Energy report that took the closest look yet at the potential for new hydropower generation. By most rough estimates, a gigawatt is enough electricity to power about 750,000 to 1 million homes.

No need to cringe at the thought of massive new fish-killing dams.

With modern engineering and emerging technologies, most of those gains could come at a minimal environmental expense, according to Shih-Chieh Kao, a research scientist at Oak Ridge National Laboratory who was lead investigator for the hydropower research project.

“One thing we really need to know is, by region, how much hydropower development potential we missed,” Kao says, explaining that the research was part of the Obama administration’s push to develop new sources of renewable energy. The findings are not intended to provide site-specific guidance for development. They’re meant as a roadmap of sorts for energy planners.

And while the numbers sound impressive, the total is actually a big cut from previous estimates, partly because the researchers took a hard look at environmental constraints, Kao says, describing how the streamreach development assessment incorporated new stream flow data and land-use information, especially relating to sensitive and protected lands and endangered species.

Crunching the data for Colorado wasn’t easy, he says, referring to the state’s complex water rights allocation system. Because most of the state’s water is already allocated, some of it several times over, there probably will never be a big new hydropower project, but there’s plenty of potential for smaller scale versions, even along irrigation canals.

At a community scale, new hydropower could be a huge and positive addition to an emerging distributed power grid built on the idea that electricity should be produced as close as possible to the area where it’s going to be used. That reduces the need for expensive new power transmission infrastructure and also saves energy, because power is lost along every mile of transmission.

Colorado is moving in this direction, with four projects currently under development that have already been approved under a streamlined federal regulatory process authorized under a bill sponsored by the state’s congressional delegation. All four are small community scale projects, including a six-kilowatt project in Garfield County, the Pandora water project in Telluride (320kW), a 22-kW project in Orchard City and an 11- kW facility in Silverton.

On a slightly larger scale, the Montrose South Canal project came online recently, generating 7.5 megawatts, along with a new 2.6-MW facility at Carter Lake and the 8-MW project at Ridgeway Dam.

All of the projects are either diversions or retrofits to existing dams or impoundments. They are classified as either small hydro or micro hydro projects, according to Nate Watters, spokesman with the Colorado Energy Office.

The federal study included Colorado as one of the states with the most untapped hydropower potential, along with other parts of the West, including Alaska, California, Idaho, Montana, Oregon, Washington and Wyoming, showing a possible path away from reliance on fossil fuels.