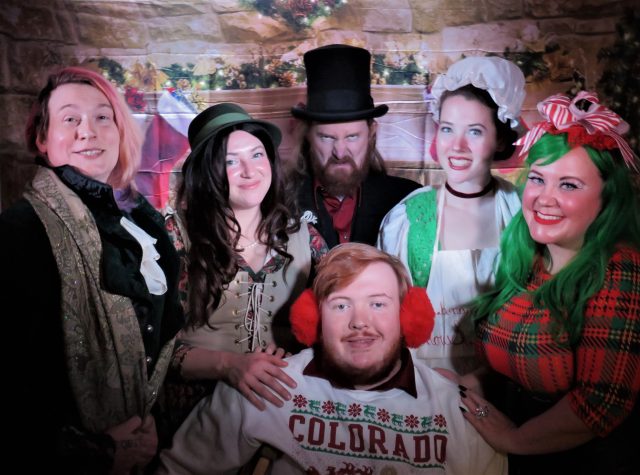 If outdoor winter activities aren’t your thing or you’re looking for things to do with the whole family, consider checking out some of these performances from theater companies across the Front Range. Whether you’re into holiday fare or want to use theater to escape the season, these arts organizations have you covered with a diverse array of programming for even the pickiest family members.

Away in a Basement: A Church Basement Ladies Christmas, presented by BDT Stage, Nov. 14-Dec. 28

As a part of their 45th and final season, BDT Stage presents Away in a Basement: A Church Basement Ladies’ Christmas. It is 1959 and the day of the Sunday School Christmas Program. As the children rehearse in the sanctuary, the ladies of the kitchen are finishing up church tasks. Little do they know what surprises are in store for them as they are called upon, once again, to step in and save the day. Church Basement Ladies is a musical comedy that looks at what life was like growing up Lutheran in the Midwest in the 1960s.

Looking for a new holiday tradition? Consider checking out Vintage Theatre’s regional premiere of Dot. Written by Colman Domingo, an actor from HBO’s Euphoria and writer of Summer: The Donna Summers Musical, Dot explores the wild holidays at the Shealy household. As Dotty struggles to hold on to her memory, her children must fight to balance care for their mother and themselves. This twisted and hilarious new play grapples unflinchingly with aging parents, midlife crises, and the heart of a West Philly neighborhood.

Drunk Christmas is a shortened, booze-soaked version of Charles Dickens’ classic tale. Audiences join a drunken cast for a beer and watch them teach Scrooge a lesson about Christmas and all its “spirits.” Spectators are invited to participate in the shenanigans with Rocky Horror-style interactive goodie bags and a Christmas Carol-themed drinking game.

Holly Jolly Holy Sh!t, written by local playwright Kate Hertz, is described as being a Christmas play “in the same sense that Die Hard is a Christmas movie.” Milo is a smooth-talking slacker tasked with luring Ava, an activist, out of an important community center so it can be demolished. What follows is a heartwarming caper as Milo learns the importance of justice, honesty and not being a jerk. Masks are required for audience members.

The new play, acts of faith, makes its U.S. theatrical debut at the Aurora Fox. It follows a young woman named Faith who gets mistaken for a prophet. When a revered religious leader attempts to take advantage of her plight, she begins using her ‘gift’ to right wrongs and punish the wicked. Featuring renowned Colorado theater-maker Betty Hart, acts of faith takes audiences on a journey that explores the struggle between good and evil, the disillusionment of youth, and the power of belief.

Curious Theatre Company continues its 25th season with the regional premiere of Alma. The play considers who the American dream belongs to through the lens of Alma and her daughter, Angel. Long ago, Alma and Angel made 16 wishes together of what they hoped would happen in the future. However, now that Angel is 17, she’s got a different vision for her future than her immigrant single mom. This poetic, funny and timely piece was developed at the Denver Center Theatre Company’s New Play Summit in 2020.

Think you know your Sherlock Holmes? Butterfly Effect Theatre of Colorado presents an irreverent take on Sir Arthur Conan Doyle’s famous characters with a bold new female perspective. You’ve never seen Sherlock quite like Ms. Holmes & Ms. Watson — Apt. 2B, Kate Hamill’s quick-witted, absurd reboot, in which Holmes and Watson are portrayed as oddball roommates. Come along with the world’s top consulting detective and her non-sidekick as they look into nefarious scandals and question sexy villains.

Our Town and The Book Club Play, presented by Arvada Center for the Arts and Humanities, Feb. 24-May 21, 2023

Thornton Wilder’s seminal metatheatrical play, Our Town (Feb. 24-May 21, 2023), explores small-town America and the people who live there. The themes that permeate Our Town run far deeper than witnessing the everyday trappings of a small town. The playwright’s prescribed minimal approach and the intimate space of the Arvada Center’s Black Box Theatre combine for an immersive story of deep truths and the value of cherishing life’s passing moments.

The Book Club Play (March 17-May 18, 2023) starts innocently enough — friends form a club to explore books and discuss together, maybe with a glass of wine. But what happens when a book club is selected for a documentary film and a provocative new member joins? Directed by the Arvada Center’s Artistic Director Lynne Collins, the play treats audiences to Karen Zacarías’ hilarious new comedy about books and the people who love them.

An international art festival is about to begin and Mariana, the director of a swanky modern art gallery, has a severe problem: Her showroom is an active crime scene. Laughs in Spanish at the Denver Center for the Performing Arts is part crime-comedy and part telenovela. Stylish and vibrant, this world premiere offers a light-hearted look at the struggles many Latinas go through to gain entry into cultural and artistic spaces that have historically excluded them.