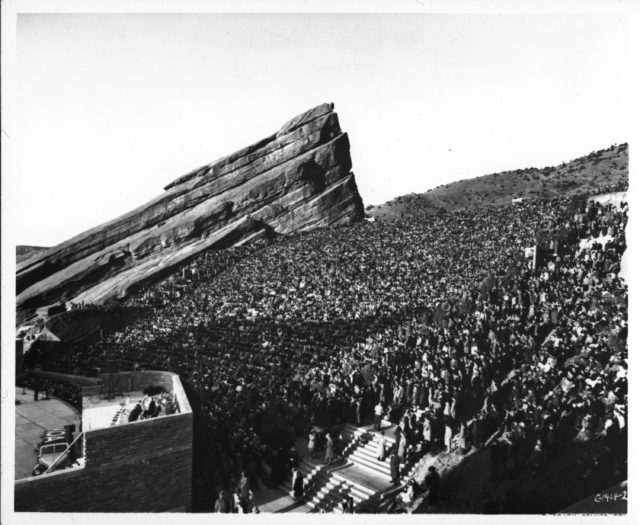 As he sits down at a patio table at The Point Cafe, G. Brown slides a heavy tome in my direction: Red Rocks: The Concert Years.

I flip through and stop at a picture of Icelandic polymath Bjork, who took the stage in May 2007, and wonder how fantastic that show must have been.

“It was,” Brown says with a smile.

Brown was the founding director of the Colorado Music Hall of Fame beginning in 2011; he then launched and now oversees the Colorado Music Experience, a nonprofit cultural and educational organization established to preserve the legacies of Colorado music (http://colomusic.org). is preparing to update his Red Rocks book. In celebration of the beginning of the summer—prime Red Rocks season—Brown took some time to talk about the history of the stunning amphitheater: the music, the myths, the magic.

The making of Red Rocks

Long before the String Cheese Incident was playing three-night runs over New Years’ Eve, Red Rocks was privately held by John Brisben Walker, an industrialist and the editor of Cosmopolitan magazine who bought the 4,000 acres of land in May 1905 and dubbed it Garden of Titans to compete with Garden of the Gods in Colorado Springs.

Walker threw himself into developing Red Rocks, building trails through the park, a tea house, an observation deck, and a railway to ferry people up the steep venue. But after a decade he ran out of funds and sold a 1,000-acre tract of the area to the city of Denver. While there was some disagreement on what direction to take the land (mayor Ben Stapleton wanted it to be a rock garden), the city ultimately used the New Deal-created Civilian Conservation Corps (CCC) to create stairs and tiered seating to build the amphitheater we know and love today.

“The only piece of motorized equipment they had was a truck,” Brown says. “Everything was done with picks and shovels, dynamite.”

In 1941, the new and improved Red Rocks opened, featuring mostly opera and orchestral works in the early days. The first annual Easter Sunrise Service took place in 1947, and has remained the first show of the season every year since (making 2022 the 75th anniversary).

“I’ve spent a lot of my adult life debunking the rumors around this show,” Brown says.

Famously, Denver was the only date on the band’s two American tours in ’64 and ’65 that did not sell out. It was ascribed to two things: One, no
mass transit.

But perhaps the real reason ticket sales stalled was the price: it cost a whopping $6.60 to see the lads from Liverpool against that otherworldly backdrop on Aug. 26, 1964.

“But look at any photos of that (Beatles) show, and people are spilling out over the rocks,” he adds. “They sold 7,000 tickets, and there’s 10,000 people, no doubt about it. This is before concert security. Every high school student in the metro area knew you could sneak in there. And they did.”

The Beatles were the first major rock ‘n’ roll act to take the stage at Red Rocks, and the rest, as they say, is history.

Riots on the Rocks

Even before The Beatles played Red Rocks, Ray Charles took the stage
on Aug. 21, 1962. Concertgoers arrived at the park around noon for a show that wasn’t slated to start until 8 p.m.―and they started drinking to deal with
the heat.

But when the band stepped on stage that evening, there was no Charles. The young singer was allegedly stuck in traffic on his way to the venue, forcing his band to play extended instrumentals to appease the audience.

“It wasn’t really on the record at the time,” Brown says, “but Ray was dealing with heroin addiction and was strung out before the show.” Months before the Red Rocks gig, police had discovered heroin in Charles’s hotel room before a gig in Indianapolis.

When Charles still hadn’t taken the stage at Red Rocks an hour later, the crowd began hurling beer bottles and cans toward the stage, chanting, “We want Ray!” while teenagers climbed the lighting rigs and sound equipment. The police officers there were of little help, as many were tasked with directing traffic.

When Charles arrived at the venue and saw the unpleasant scene unfolding, he wanted to cancel the show—some members of his band had been hurt at another gig gone sour, and Charles wasn’t interested in a repeat.

However, the promoters of the show pushed Charles to take the stage, and Theatres and Arenas director Joe Salankey said that if the band didn’t play, Charles would be on the hook for refunding the crowd’s money.

So, Charles took the stage, knowing there was no stipulation in his contract about how long he had to play; 13 songs and less than 45 minutes later, the band was already headed backstage.

Pandemonium also broke out when Aretha Franklin refused to play a show when she discovered the booking agent couldn’t pay her.

Jethro Tull: ‘Bungle in the Jungle’ becomes a Ruckus on the Rocks

There’s no discussion of riots at Red Rocks without talking about Jethro Tull. The prog rock band was booked by storied Colorado agent Barry Fey, who was responsible for bringing the Grateful Dead, the Byrds, Buffalo Springfield, Van Morrison, Jefferson Airplane, Frank Zappa and more to the Centennial State.

“I’ve always said what (Fey) did is worth something; how he did it I’ll never acquiesce to,” Brown says, referring to the “cartel methodology” that is still employed today to bring musicians to the area, including radius clauses that prevent musicians from playing at other venues within sometimes hundreds of miles.

“But back in the ’70s, Denver was just a fly over city,” Brown says. “Kansas City was 600 miles one way, Salt Lake the other, and neither of those were developed markets, and (Fey) made Denver a stop.”

Fey had orchestrated a show at Mile High Stadium several months before Woodstock in 1969, which devolved into tear-gas-soaked rioting.

“So, one and done with that,” Brown says, “but it gave him the footing to start booking shows up in Red Rocks: Steve Miller Band; Hendrix famously played there opening for Vanilla Fudge.”

In 1971, Fey booked Jethro Tull at the Morrison-based venue.

“He should have booked Jethro Tull for two shows, of his own admission,” Brown says, because a large number of ticketless fans had showed up. “It was a different time: Music was free, cops are pigs, you know, the whole counterculture thing coming to roost in Colorado. There were a bunch of rabble rousers outside (Red Rocks), probably just a couple 100, but they decided they were gonna get in, and the cops used tear gas that the wind blew inside the venue where no one knew what was going on.”

“Always a fan of that guy for what he did,” Brown says. “If he’d have just bagged it, there’d have been a riot that we’re still talking about. But they kept playing; (Anderson) gagged his way through a set like a whirling dervish madman and kept the show going on, otherwise it would have been really brutal.”

The venue was eventually evacuated that evening, and rock music was banned from Red Rocks for a number of years.

Of course Fey was instrumental in bringing that back: He sued the city and won the right to bring rock music back. In 1983, Fey promoted a show at Red Rocks for a little known Irish band called U2, who ended up filming a portion of Under the Blood Red Sky at that concert.

U2: Under the charcoal gray sky

U2 had played small venues in Colorado already by 1983, including the 1,400-capacity Rainbow Room in Denver. But the Irish lads were ready to take the world by storm with a concert movie filmed at Red Rocks called Under the Blood Red Sky.

“You wouldn’t put a dog outside,” Brown says. “So the band’s manager got on the phone and called everybody, every radio station, and said, ‘Look, we’ll do a free show tomorrow night, but we need people to come out tonight because we’re filming.’”

Several thousand people did show up, but certainly not the nearly 10,000 it takes to fill the venue.

The concert documentary went on to play on MTV, giving people all over the world a chance to see Red Rocks.

“That was the advertisement that made the world aware of Red Rocks,” Brown says.

For as many awesome things that have happened at Red Rocks, there are a number of things that fall squarely in the urban legend category. You might see Bob Marley in 1978 listed as one of the performances on the wall of historical shows at the visitor’s center at Red Rocks, but Brown says this is the result of shoddy research.

“He never played Red Rocks,” Brown says. “That entire tour was canceled because Bob was sick (with cancer).”

Brown says he pointed this out to someone from the city of Denver who was responsible for the research and was met with a shocking response: “Who’s going to know?”

“But if I had a nickel for everybody who said, ‘Oh, boy, Bob Marley at Red Rocks, I wish I’d seen that!’ Well, you didn’t miss a thing.”

Find more stories about Red Rocks in G. Brown’s forthcoming update to Red Rocks: The Concert Years, at Amazon and other booksellers.