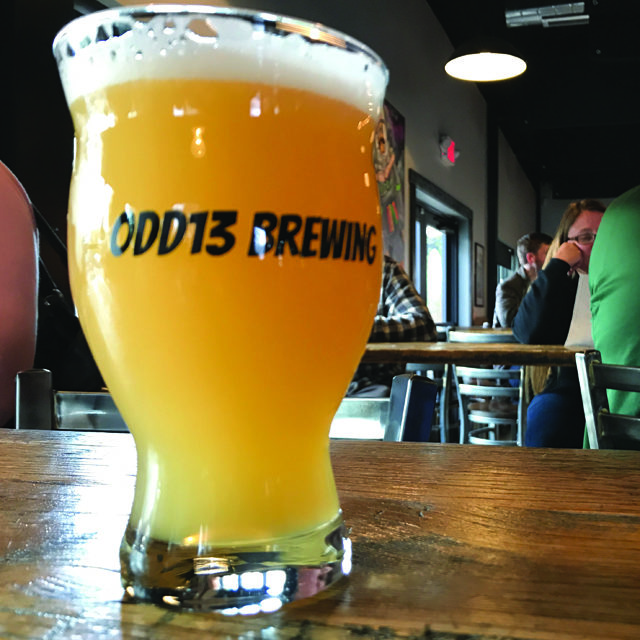 With nearly 50 operating breweries in Boulder County, beer is as ubiquitous as French fries. Even better, these beers are as diverse as the brewers who make and drink them. From old-world execution and historically recreated ancient ales to the latest souring techniques and biotransformation of hop compounds, Boulder County brewers are like jazz musicians with a twinkle of Willy Wonka.

And, as beer palates continue to expand, some brewers are trying to bring a sense of regional identity to their beer. Case in point: Odd13 Brewing in Lafayette and its Colorado Kid, a locally sourced hazy IPA that is only available in Colorado markets.

It all starts with malt, and for The Colorado Kid, Odd13 turned to Troubadour Malting in Fort Collins.

“Because of the open dialogue throughout the supply chain, and the unique malts used in its brewing,” Schooley says, “Colorado Kid is a truly special beer that couldn’t exist anywhere else on the planet.”

Malt is the soul of beer and hops are the spice. And Odd13 is known for hops — hops from everywhere and anywhere. It’s no surprise the lone, non-native ingredient in Colorado Kid would be Galaxy, a proprietary hop strain from Australia that contributes pungent tropical and stone fruit aromas. But The Colorado Kid also uses Cascade sourced from Billy Goat Hop Farm in Montrose — the iconic U.S.-bred hop that contributes notes of pine needles and grapefruit. It’s the hop Anchor Brewing used in Liberty Ale, the first American IPA. And it’s the hop Sierra Nevada used to finish their iconic Pale Ale. If American craft brewing has a flavor, Cascade is it.

Until recently, the U.S. could only claim to have invented three unique beer styles: California common, cream ale and light lager. But with the recent explosion of hazy/juicy IPA, also known as New England-style IPA or East Coast IPA, these turbid ales might be the fourth.

Odd13 specializes in hazies, and The Colorado Kid is no exception. They use an East Coast IPA strain developed by Inland Island Yeast, located in Denver, which produces a malty flavor while highlighting the hops and leaving a touch of sweetness.

Yes, we’ve all heard that there’s nothing as pure as fresh Rocky Mountain water. But in truth, every brewer adjusts the water chemistry somewhat. Nicole Reiman, Odd13’s head brewer, uses calcium chloride in Colorado Kid to give it a fuller mouthfeel.

Outstanding. With a properly pale hazy appearance, The Colorado Kid displays sticky lacing on the glass and fresh fruit on the nose. The mouth is full — bacon double cheeseburger full — and features loads of stone fruit: peach, nectarine and apricot. The finish is fast, clean and refreshing, and at 7.2% alcohol by volume, you’ll want to drink it faster than you should.

But take a moment to savor the brew — Odd13 worked hard to get as much Colorado in the glass as possible, and the results show. Craft beer has always been about local, but with a brew like The Colorado Kid, local is a tasteable asset.