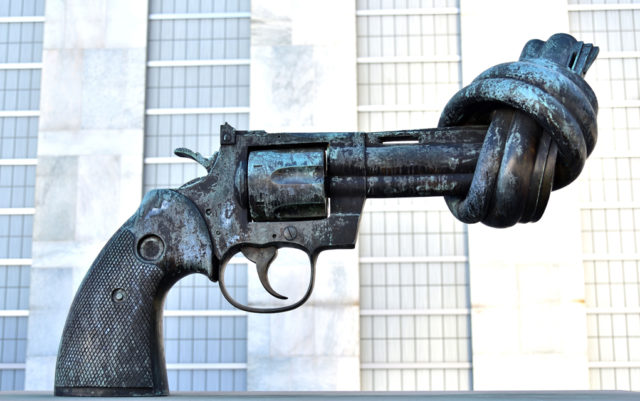 When I was a young man growing up in rural Oregon, there was a term for people like me: “gun nut.”

By my 20s I had a sizable collection of rifles, pistols and shotguns. Some people I knew had a “pre-64” Winchester, a rifle renowned for its quality. Or they had a Browning Auto 5, a beautiful shotgun. A friend had 10 of those in various gauges.

But gun nuts today are a different breed entirely. When they talk about guns, they don’t get into describing graceful lines, tight grain wood or immaculate bluing. At gun stores today, what I hear praised is firepower that comes out of black plastic and steel. And these weapons are not for hunting, they’re assault rifles sometimes called “modern sporting guns.” The kind of sport they’re good for is not spelled out.

One of the gun stores I visited recently boasted a back wall lined with assault-style rifles, pistols and defensive shotguns, all black except for a choice few in hot pink “for the ladies.” The staff mostly wore black as well.

Their T-shirts for sale featured some amalgam of the American flag and warnings such as “Don’t tread on me” and “ΜΟΛΩΝ ΛΑΒΕ”, an ancient Greek phrase roughly meaning “Come and take them.” Everybody — and I mean staff and other customers — was packing holstered pistols. I felt out of place and time.

In my sleepy Oregon town, sentiments like this don’t stop at a gun store. A trip to the supermarket is not complete without several sightings of men or women packing a pistol on their hip.

It is as if we are living in a fetishized version of the Wild West. Some of these folks probably envision themselves as the white-hat cowboy, a character prepared to defend against marauders.

My town boasts one of the oldest independent newspapers in Oregon, but the readership is a quarter that of the Facebook page for the local police scanner. Every crime committed is conveniently pinged to each follower’s cell, providing a steady feed of this world’s ills. But when we see the world through a lens of fear, it is no wonder that we look at our neighbors with suspicion. Maybe that explains the amazing statistic last year from Axios.com that “an estimated 5 million Americans bought their first gun.”

Dana Loesch, the former spokeswoman for the bankrupt National Rifle Association, talked about this free-floating fear: “The government has proven it cannot keep us safe, yet some people want to disarm all of us.”

This new group of men and women who wear guns as political statements apparently no longer experience weapons as tools for hunting or for sport. Even claims of defense are suspect. What type of threat necessitates military firepower? Somehow, guns have become identified as symbolizing freedom, individuality or just plain cantankerousness. It makes me miss the old days when a gun was just a tool — albeit sometimes a beautifully crafted one.

The irony of the modern gun movement is that a take-no-prisoners stance on gun rights might just turn into a groundswell of support for tighter regulations of guns. But when the patriots start to lose gun nuts like me, they teeter on the brink of irrelevance.

Meanwhile, as the FBI cracks down on extremists who like to brag about their weapons on social media, we could be looking at more outbreaks of violence. LaVoy Finicum, who was killed by the FBI during the Malheur Refuge occupation in Oregon, seems to have become a martyr. Kyle Rittenhouse, the young man charged in the slaying of two civil rights protesters in Kenosha, Wisconsin, has even developed a cult-like following.

The so-called patriots of today risk the very rights they’ve pledged to uphold with their lives. I know it’s a far less exciting thing to promote, but what makes America great is getting things done by talking and compromising.

I do not own an AR-15, and depending on my mood I can make an argument both for and against further regulations. After all, is my favorite deer rifle any less deadly than the scariest-looking assault weapon?

But on Jan. 6 at the Capitol, as I witnessed some of my countrymen threaten to use their weapons against our government, I found regulations more appealing.

It may be tedious to take part in politics on the level of reading about issues and engaging with people, but so far, that’s what makes America the best place to live. If I had to come up with a T-shirt slogan about a weapon, it wouldn’t be a threat, a warning or a brag. How about: A gun is just a gun.

Brian Sexton is a contributor to writersontherange.org. He lives in Southern Oregon and is a lifelong outdoorsman and conservationist. He enjoys thinking and writing about modern issues facing Western landscapes and the fish, wildlife and people that inhabit them.

The ‘energy gap’ nobody wants to tussle with

Wildlife watching has been getting a free ride