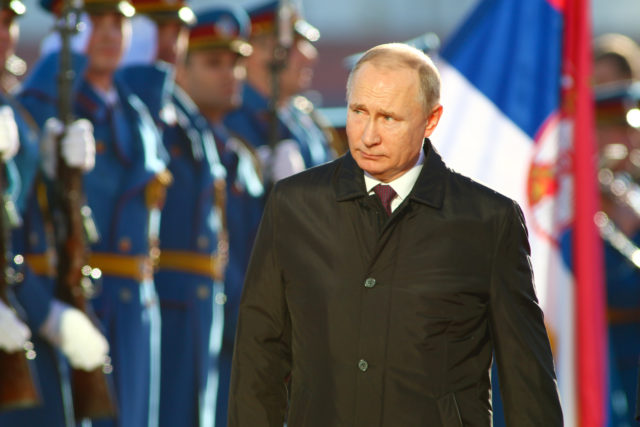 Progressives have been focused on pushing domestic reforms such as voting rights, environmental sustainability, labor struggles, reproductive rights and Build Back Better.  We are fighting for a more democratic government which promotes prosperity for all. Meanwhile, an increasingly authoritarian rightwing promotes a phony populism which offers racial scapegoats.

Now a foreign policy crisis is dominating the headlines. Putin’s attack on Ukraine demands our attention.

It’s going to be tough but we need to fight for democracy at home and abroad. The two struggles are connected. Putin and his gang know that. Last summer, Russian Foreign Minister Sergey Lavrov talked about the Jan. 6 insurrection on the U.S. Capitol. He told reporters that the Kremlin is  “following with interest” the “persecution” of those “accused of the riots on Jan. 6.”

Then at an economic forum in St. Petersburg, Putin said the people who stormed the Capitol were rightly upset about the election results. “They came with political demands,” he said, adding that the criminal suspects received “very harsh charges…. Why is that?”

Then after his Geneva summit with President Biden, he was asked about his silencing of political opponents. He talked about the Capitol rioters’ “political demands” and that one of them was shot by the police even though none of the insurrectionists were armed.

Putin was repeating lies from the Trumpist rightwing. Julia Davis of The Daily Beast reports that on the anniversary of the insurrection, Russian state TV reporter Denis Davydov approached Rep. Jamie Raskin (D-MD)—a member of the House select committee investigating the Jan. 6 riot—and asked him: “It is believed that Jan. 6 was a planned attack by the FBI and radical Democrats. Are you investigating this?”

Raskin responded,  “Give my regards to Vladimir Putin.” It must have been somewhat surreal for Raskin, a progressive who has been critical of American imperial adventures. His father, Marcus Raskin, founded the leftwing think tank The Institute for Policy Studies (IPS). Jamie isn’t a fan of fascists and their coup d’etats. He joined IPS to honor the memory of Orlando Letelier and Ronni Moffitt who worked for IPS. On September 16, 1976, they were assassinated by car bomb by agents of the Chile’s fascist Pinochet regime on Washington, D.C.’s Embassy Row. Letelier was the former Chilean ambassador for Salvador Allende’s democratically elected socialist government overthrown by a CIA- assisted military coup. Moffitt was his assistant and a U.S. citizen.

In earlier years, the IPS had been burglarized and spied on by the FBI. There’s been a lot of speculation about how much segments of the U.S. government knew about the assassination plot beforehand.  But FBI investigators worked hard catching the killers. However, the CIA (then led by George H.W. Bush) wasn’t very helpful and seemed to deliberately spread misinformation.

That was the Cold War. We are now in quite different times. We had the Post Cold War period. Now we are plunging into a new era. But Putin may think he is returning to a glorious Czarist past. In his rantings on Ukraine, he is particularly angry about Lenin and the Bolsheviks.

Today rightwingers around the world came to consider Putin to be leader of the white Christian world. Back in 2013, Pat Buchanan praised the “moral clarity” of the Russian leader in an essay entitled “Is Putin One of Us?” It sounded a little strange. Buchanan said Putin offered a traditionalist alternative to “America’s embrace of abortion on demand, homosexual marriage, pornography, promiscuity, and the whole panoply of Hollywood values.” He said too many Americans were “still caught up in a Cold War paradigm.” Instead, he suggested, “the 21st century struggle may be horizontal, with conservatives and traditionalists in every country arrayed against the militant secularism of a multicultural and transnational elite.”

According to the New York Times and the Washington Post, Putin’s rightwing fanboys were defending Putin but have become nervous after the invasion. Italian far right leader Matteo Salvini wore shirts with Putin’s face on in Moscow’s Red Square and in the European Parliament. Today he condemns violence on both sides and leaves flowers at Rome’s Ukrainian embassy. In France, Marine LePen, presidential candidate  of the far right National Rally party—which received a loan from a Russian bank—denounced the invasion. The other French far right presidential candidate, Eric Zemmour, did the same.

Brazil’s far right president Jair Bolsonaro was the last world leader to meet Putin before the invasion. He said he was in “solidarity” with Russia. In 2020, Putin told Bolsonaro,“You express the best masculine qualities.” Bolsonaro admires Brazil’s former military dictatorship though he said it should have tortured and killed more dissidents.

Bolsonaro scolded his vice president for denouncing the invasion, saying only the president should speak out on the matter. But Bolsonaro doesn’t speak out.

Is Putin no longer the leader of the white Christian world?