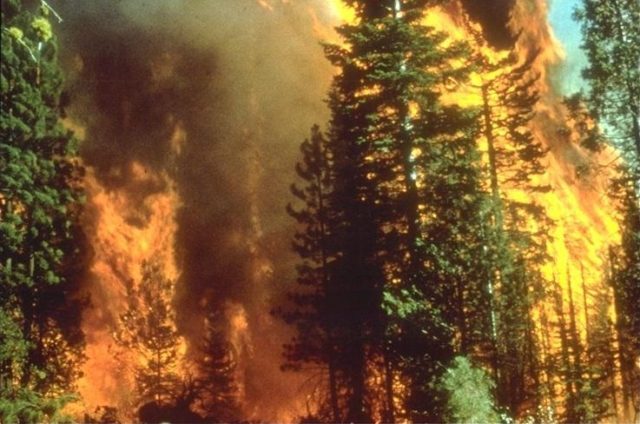 For some reason California’s outgoing Governor Jerry Brown started his Nov. 11 press conference on the state’s wildfires by calling them “the new abnormal.”

Why he did that is a complete mystery, since for the rest of the press conference, he made it abundantly clear that he considered the fires to be “the new normal” and a challenge that had to be responded to as such.

“This is not the new normal,” Brown began. “This is the new abnormal, and this new abnormal will continue certainly in the next 10 to 15 years.

“We have a real challenge here threatening our whole way of life,” he added. “We’re going to have to invest more and more in adaptation. It’s not millions. It’s billions and tens and probably hundreds of billions (of dollars.”

The implication of the first quote is that California will experience the sort of forest and brush fires it’s currently experiencing for the next 10 to 15 years — after which there will be a return to something resembling normality.

The point of the second quote is that the fires — and the protracted drought and heightened average temperatures that are increasing the fires’ severity — are the result of global warming and are here to stay. In other words they are the “new normal” and Brown knows it. You don’t spend hundreds of billions of dollars on adapting to abnormal conditions that are by definition transitory.

When it comes to the “new normal” in California, bigger and nastier fires are the least of it.

Steven Chu, the Nobel laureate physicist who served as Obama’s first energy secretary, has been warning for a decade that California’s Sierra-Nevada snowpack could decline by as much as 90 percent by the end of the century.

“We are looking at a scenario where there’s no more agriculture in California,” Chu told the Los Angeles Times in a February 2009 interview. “I don’t actually see how they can keep their cities going,” he added.

California got a taste of what that might be like in 2015, when the state’s snowpack was 5 percent of normal on April 1, the date on which it usually is at its peak. Brown ordered mandatory water conservation that year. Fortunately things improved almost to normal the following year, but drought conditions are back again.

It’s not unreasonable to assume that a dramatically shrinking water supply is going to be the new normal in California and that it would be prudent to start adapting to it — like, starting yesterday.

The truth is autumn brush and forest fires are neither the new normal nor the new abnormal in California. They’re the old normal. They’ve been a natural part of the California ecosystem for millennia.

There’s a “new abnormal” in California, alright, but it’s not the fires. It’s the explosion of human habitation in fire hazard areas. It’s not the drought; it’s the quadrupling of California’s population in less than 75 years — from under 10 million at the end of World War II to about 40 million today. And 10 out of 10 Californians still prefer to drink water.

What has to be done to adapt to the “new normal” of climate change in California isn’t rocket science, but it is going to be politically hard and expensive as hell.

If the state wants to reduce the risk of forest fires, it is going to have to start managing its forests, which means thinning them, clearing out accumulated flammable material on the forest floors, and cutting wide fire breaks in forest and brush areas.

If it wants to reduce the risk of catastrophes like the incineration of Paradise, California, it is going to have to require clear-cut areas around homes, subdivisions and whole towns, and require new construction in fire hazard areas to use non-flammable materials.

If it wants to continue to prevent its existing forests and farms from turning into deserts, it is going to have to find alternative sources of water to replace the shortfall that would result from a 90-percent reduction in the Sierra-Nevada snowpack — about 35 or 40 million acre-feet — and still leave enough of what’s left for the state’s remaining forests; a good way to start would be to make it a state goal to build enough desalination plants to provide 100 percent of the water consumed by the state’s major cities.

Adapting to the “new normal” of a hotter, drier climate is going to require a breathtakingly large increase in the state’s electric generating capacity to support an increased demand for desalinated water and air conditioning — never mind replacing the state’s roughly 30 million gasoline- and diesel-powered cars and trucks with electric-powered ones.

Assuming the state doesn’t want to build a lot of new coal- and natural-gas-fired power plants, it better make its peace with nuclear power plants, with hundreds of square miles of solar power plants in the desert, and with the high-tension power lines connecting those plants to coastal population centers.

All of which have been opposed and delayed by the state’s environmentalists. If California wants to adapt to the new normal, it is going to have to develop a new environmental ethic, one which stops tolerating 20-year delays in approving the infrastructure it needs to keep the state habitable.

Let’s hope it succeeds, because if it doesn’t, there’s another way for millions of Californians to adapt to the state’s new normal, which is to move to another state. Colorado, for instance.