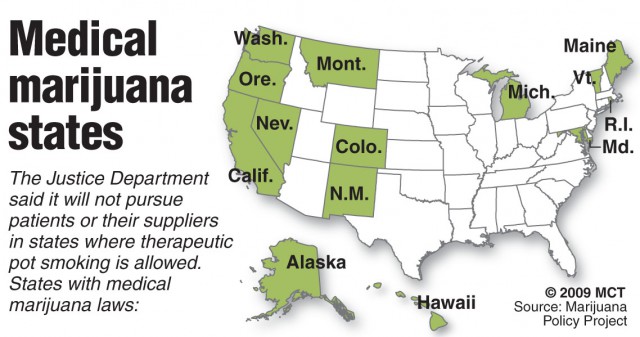 WASHINGTON — The Justice Department said Monday that it would mellow out on prosecuting medical marijuana users in the 14 states in which therapeutic pot smoking is allowed.

“It will not be a priority to use federal resources to prosecute patients with serious illnesses or their caregivers who are complying with state laws on medical marijuana,” Holder said.

At the same time, Holder stressed that “we will not tolerate drug traffickers who hide behind claims of compliance with state law to mask activities that are clearly illegal.”

“The proof will be in the pudding,” Dale Gieringer, the state coordinator of California NORML the National Organization for the Reform of Marijuana Laws said of the new policy directive, but “there has already been a substantial tailing off in the number of federal cases.”

This year’s raids resembled earlier Bush administration DEA raids, raising alarms about whether drug enforcement policies really had changed. An unsuccessful 2005 Supreme Court challenge by Oakland, Calif., resident Angel Raich left federal authorities with the power to prosecute medical-marijuana use even in states that permitted it.

“The FDA has never approved marijuana as safe and effective for any medicinal use,” the Bush administration’s solicitor general, Paul Clement, advised the court in 2005.

McGregor Scott, a former U.S. attorney for the Eastern District of California, said in an interview that the new guidance represented no change from the “practical policy” followed under the Bush administration.

“Without exception, the cases we accepted and prosecuted … involved violations of both state and federal law,” Scott said, adding that “(we) focused on the most egregious offenders who were making millions of dollars selling marijuana.”

In California, where voters adopted a medical marijuana program in 1996, records show that 24,258 user identification cards have been issued over the past five years. Gieringer, though, estimated that the true number of medical marijuana users in the state is closer to 300,000.

In Washington state, voters approved a medical marijuana initiative in 1998 that permits the possession or cultivation of a personal 60-day supply. It’s a different system from that of California, where public dispensaries have proliferated.

“There are not the retail storefronts in Washington,” noted Martin Martinez, the executive director of the Seattle-based Cascadia NORML, adding that the Obama administration appears “a little more supportive” than the Bush administration did.

The new policy memo is part of the priority-setting that happens in every new Justice Department. During the Bush administration, for instance, federal prosecutors were encouraged to pursue child pornography and immigration cases.

Now, individuals “with cancer or other serious illnesses who use marijuana as part of a recommended treatment regimen” will not be deemed worthy of prosecution, the policy memo says. Neither are “those caregivers (who) in clear and unambiguous compliance with existing state law provide such individuals with marijuana.”

“At least this is on paper,” Gieringer said, “so perhaps it will make a difference in how (prosecutors) operate.”

However, federal raids and prosecutions should continue when other potentially law-breaking circumstances exist, Holder stressed.

The unlawful possession of firearms, “excessive amounts of cash,” possession of other controlled substances and questionable financial gains still might provoke prosecution. The policy appears consistent with some high-profile past prosecutions, including a case last year in which two Modesto, Calif., men were convicted of running a major pot dispensary that earned more than $4.5 million.