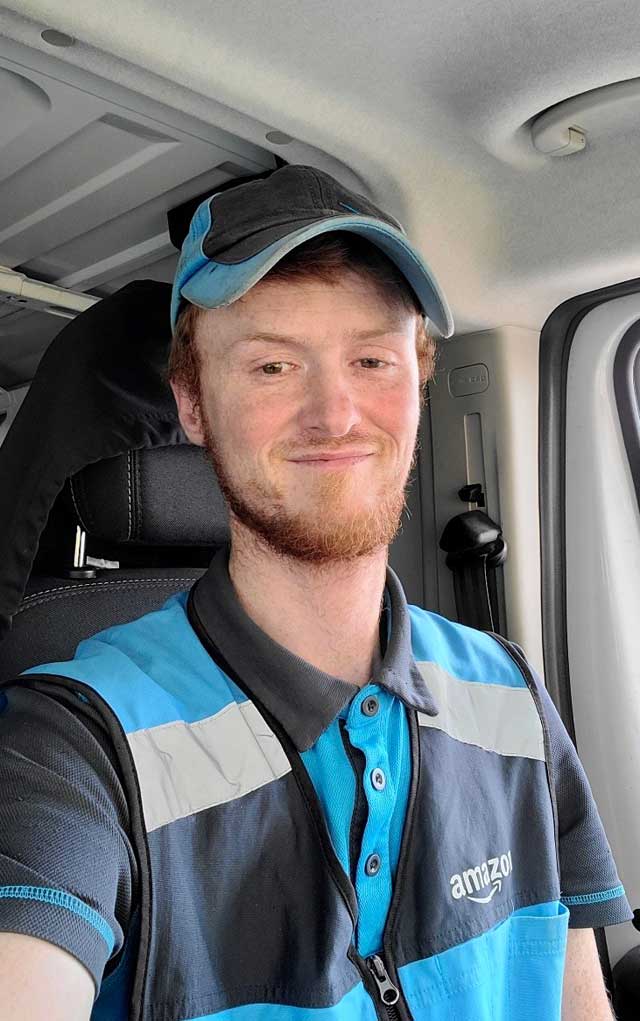 It was “just a typical, normal day on the delivery route,” for Colton Coulimore, an almost-30-year-old Amazon Prime driver from Longmont. Then, as he was driving north on 28th Street in Boulder, he saw a man flailing on the ground, in the middle of the road in front of a busy shopping plaza.

“It came to me this guy was in trouble and he needed somebody,” Coulimore says. “And I couldn’t go against my moral character.”

So, in the time of social distancing, face masks, sterile gloves and hand sanitizer, Coulimore whipped his delivery truck around at the nearest intersection, parked it in front of the plaza entrance and helped his fellow man, the risk of getting COVID-19 be damned.

“It was just a reaction,” he says. “I knew that coronavirus has been around. It just doesn’t matter, if you see someone in trouble, don’t let them go. What would they want in return? If they saw me laying on the road, would they stop and help me?”

Coulimore made eye contact with the man, gently flipped him over, asked his name and if he had been hit or injured by someone or something. He asked if the man had epilepsy — he was seizing on the ground — and the man nodded his head and said yes. He asked if anyone had called for help — the man said no — and that’s when Sandy and Patrick Morrissey arrived.

The Morrisseys had seen the man seizing on the ground, and Patrick, a physical therapist, knew it was his duty to turn around to help. As Coulimore went to his car to get a mask for the man, Patrick called 911 for emergency assistance. Sandy got the man a bottle of water from their car after she asked if he needed anything.

But with help on the way, Coulimore’s truck blocking the road and the man’s seizures subsiding, the gravity of Coulimore’s selfless act hit the Morrisseys.

“He was just so selfless. He just jumped out there. We’re adults and Patrick’s in the health field so of course we were going to stop,” Sandy says.

“I gotta tell you, Colton was the story. He’s amazing,” Patrick says. “The guy did everything right. He positioned his vehicle to protect the guy who was laying on the sidewalk. It would be easy for people to drive over him. He went straight to flashers. He just jumped out and sprung into action. It was impressive his ability to engage and be there for this guy and take care of him.”

Coulimore says he relied on training he learned while serving as a lifeguard and some emergency response training he took in college. He has also credits his don’t-think-twice response to his upbringing — both his parents are in law enforcement.

I asked Patrick if he’d ever seen anything like it, being in the health field and also considering the time in which we’re living now. Where does this act rate in terms of selflessness?

“How high does the scale go?” Patrick says. “Whatever is beyond expectations, that’s where I would put it. It was remarkable.”

EMTs arrived shortly thereafter and took the man to a local hospital. Sandy checked a few days later to see if the man was still recovering there — he wasn’t. Due to privacy laws, I couldn’t track down the man either, and calls to local EMT organizations and hospitals were met with rebuttals that the man’s identity couldn’t be disclosed.

Of course, everyone hopes the man is doing well today, but his identity is practically an aside. Coulimore, and the Morrisseys, helped a stranger in this troubling time. The undeniable message of this episode is to treat everyone well, whether they’re passing you on the street, or laying on it, or working essential jobs right now.

Sandy posted a message about Coulimore’s efforts on the social networking site NextDoor the day after — it was met, as expected, with many congratulations for their efforts. But the hope, Sandy says, was to inspire people to think hard about how they treat everyone with whom they come in contact.

“My objective was people would honor the drivers, too, and the people who are on the front line at the grocery store or serving our food, and to treat everybody with kindness,” she says.

Patrick agrees, though adds that Coulimore’s act is an example that extends beyond the circumstances brought about by the coronavirus.

“Within the health profession you see it all the time, people willing to jump right in to help somebody else. We expect that,” he says. “But I’ve also witnessed a poor guy passed out on the street and people will step over him and people will keep walking. In today’s world, where there is a coronavirus fear that I think affects our behaviors, Colton is a shining example of how to do it right. What a wonderful example of how to live.”

After the adrenaline wore off, Coulimore was able to regroup and reflect on the experience.

“After the whole moment and a couple hours of letting it sink in, it was like, ‘Wow, I kind of put myself out there with the whole sickness,’” Coulimore says. He told his wife he had no other option: “I was like, ‘Babe, I’m sorry, it’s in my moral character,’ and she was like, ‘No, I understand.’”

And in time, he was able to reflect on the message he wants to send to the community.

“I just want people to be more humble and more open to helping others,” Coulimore says.