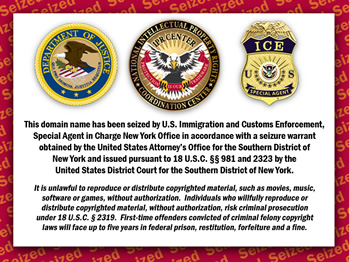 The seizure, the biggest to date under the Immigration and Customs Enforcement crackdown known as Operation in Our Sites,
(PDF) brings the total to more than 650 domains shuttered since the
program began in June of 2010. The latest seizures, which quietly began
in October, were announced days ahead of Super Sunday, when the New
England Patriots play the New York Giants in the NFL Super Bowl, one of
the world’s most popular sporting events.

“While most people are focusing on whether the Patriots or Giants
will win on Sunday, we at ICE have our sights on a different type of
victory: defeating the international counterfeiting rings that illegally
profit off of this event, the NFL, its players and sports fans,” said
ICE Director Morton. “In sports, players must abide by rules of the
game, and in life, individuals must follow the laws of the land. Our
message is simple: abiding by intellectual property rights laws is not
optional. It’s the law.”