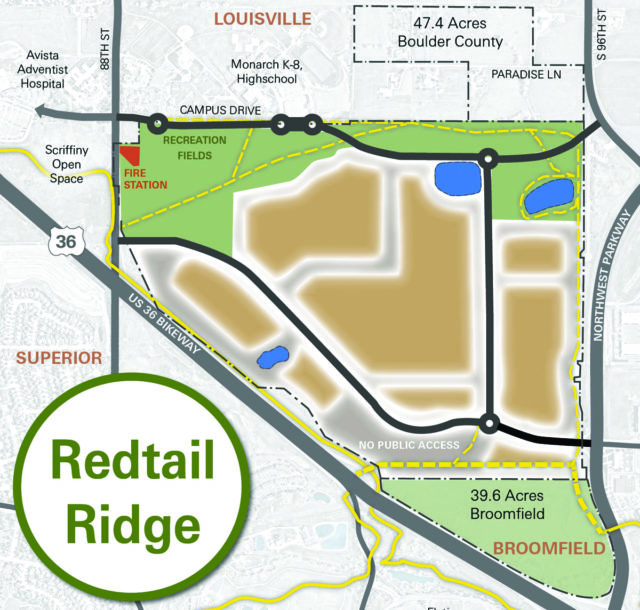 On April 19, residents of Louisville will decide the fate of the long-undeveloped and semi-controversial plot of land formerly owned by Storage Technology Corp., now known as the ConocoPhillips property—or “Redtail Ridge”—a property that’s been called a “crown jewel” and the “best land site in Colorado.”

The 475-acre plot of private land represents a significant source of untapped tax revenue for the city of Louisville, and has for almost two decades as it’s laid fallow beside Highway 36. Located between Denver and Boulder, where Louisville, Superior and Broomfield converge, it’s prime real estate. And ever since ConocoPhillips acquired it in 2008, there have been several different proposals and plans made for it—without any follow-through on any of them.

Soon, though, that will change. A special election has been called in April will ask Louisville residents to vote on a new development proposal known as the Redtail Ridge plan.

The plan requires the developer, Brue Baukol Capital Partners, to use a portion of the property to generate 3 megawatts of solar power energy and would see 93 acres donated to the city of Louisville for permanent open space; it would also extend Campus Drive all the way through the property from 88th to South 96th Street, improving access to Avista Hospital. On top of that, this plan is zoned for hospital use so that Avista has the option to build a second medical campus in the future. There are also several environmental boons to the plan: All commercial buildings constructed on the property would be required to be built with LEED standards or better, provide 40 acres of permanent conservation easement for keystone species, and add 15.6 acres of public parks and recreation facilities for Louisville. Financially, estimates put the property tax revenue from this plan at $25 million annually, according to the Yes for Louisville website.  A “yes” vote would put this plan in motion.

A “no” vote would reject the Redtail Ridge plan, which opponents hope to revise before returning it to City Council for approval. But according to Terre Rushton, a Louisville area local and lawyer endorsing the Yes for Louisville campaign, “The developer [Brue Baukol Capital Partners] has made it very clear that they’re not going back to Council.”

“The real misinformation so far has been that there’s three choices: yes, no, or make the developer go back to Council,” says Rushton, reiterating that development is inevitable at this point, and this vote gives the citizens of Louisville an opportunity to decide how it’s done with either a “yes” vote or a “no” vote on the ballot.

The Redtail Ridge plan went through seven iterations before it was finally approved by Louisville City Council in a 4-3 vote in September of 2021. In response to that decision, opponents of the Redtail Ridge plan petitioned for a referendum and collected hundreds of signatures, which prompted April’s special election to put the vote to the people—echoing a similar string of events that played out last November regarding Boulder’s annexation of CU South (News, “Annexed by emergency vote,” Sept. 23, 2021).

Such opponents, like Preserve Louisville, point out that the Redtail Ridge plan will increase traffic from 12,400 trips a day to 20,104, according to a traffic study from Fox Tuttle. It’s also zoned for 3 million square feet of commercial development, which opponents argue is too much, and will displace and disrupt prairie dogs, hawks and other native species living there. By comparison, previous major developments in Louisville have required much larger portions of open space to be dedicated to the city, they say.

Central to the argument against the Redtail Ridge proposal is that it “will damage Louisville’s small town character with urban commercial development,” the Preserve Louisville website states. If Louisville votes “no” on this issue, Preserve Louisville says “any subsequent plan will require revision and another public review,” followed by approval from the planning commission and City Council.

However, Rushton says that’s not the case. She explains Brue Baukol is not legally required to go back to Council for another public review process and they’ve “unequivocally” stated that they won’t. If Redtail Ridge is rejected by the voters on April 19, all development of this privately-owned land will revert to the 2010 ConocoPhillips plan, according Rushton.

“[Brue Baukol] has a ‘right-of-use’ to take the ConocoPhillips plan and just implement it. They do not have to [go back to Council] and said they won’t, under these circumstances, with any of the plans. Because so far they’ve complied with every single thing that the planning commission has wanted,” she says.

Rushton asserts a “no” vote does not represent an opportunity to revise the plan and won’t keep the parcel undeveloped any longer; a “no” vote is essentially a vote in favor of the ConocoPhillips plan.

So what does that plan entail?

According to the Yes for Louisville website, the ConocoPhillips plan would add 38 acres of permanent open space to Louisville (as opposed to the 93 acres offered under the Redtail Ridge plan); it would not be zoned for hospital use, meaning Avista (Louisville’s largest employer) could not move there; and it would include no new parks or recreation facilities. It would also not require LEED certification for the buildings constructed, lacks any renewable energy production requirement, doesn’t require habitat restoration, and dedicates just 20 acres of permanent conservation easement (instead of Redtail Ridge’s 40 acres). This plan would generate $21 million in property tax revenue for Louisville; and according to Fox Tuttle’s traffic study, it would still significantly increase area traffic (from 12,400 trips a day to 17,500).

“It’s not a horrible plan if they develop under the ConocoPhillips plan. But why would we throw away all the other benefits our community can get?” Rushton asks. “Redtail Ridge is the most sustainable commercial development [proposal] in the entire state . . . I don’t get it.”

Ballots will be mailed to all Louisville residents on March 28, and on April 19 the votes will be tallied, deciding what finally becomes of Louisville’s ConocoPhillips (or Redtail Ridge) property.