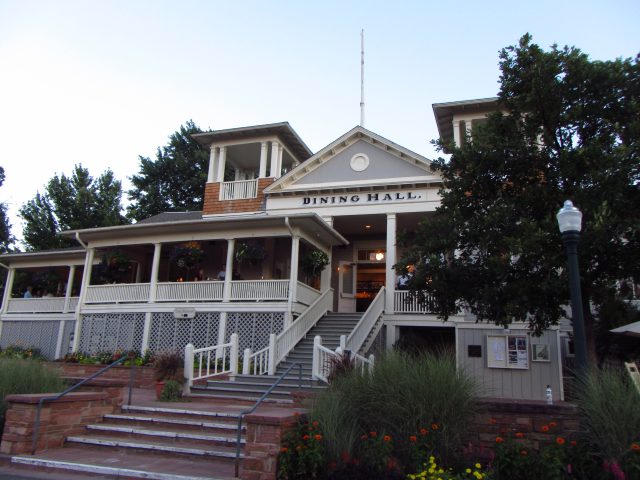 The NCAR Fire caused thousands of people to evacuate homes and businesses on March 26. Included in the order was all of Chautauqua — the first evacuation the historic institution has ever made.

“I think that really brought it home for all of us of the urgency of this issue,” says Liza Purvis, director of marketing and communications at Colorado Chautauqua Association (CCA).

Both the NCAR and Marshall fires showed the increased wildfire risk throughout the county as they burned residential areas outside of the typical fire season. The iconic National Historical Landmark sits in what is known as the wildland-urban interface, an area where a built environment meets a natural environment.

Staff at Chautauqua were forced to assess their own vulnerability to wildfire.

“Basically we’re a wooden village, an ember away from destruction,” says Debbie Stewart, the director of development and community partnerships at CCA.

Earlier this fall, CCA, the nonprofit steward of the Colorado Chautauqua, received a $280,721 Save America’s Treasures grant from the Department of Interior, National Park Service to protect Chautauqua from wildfire threats.

“We have a strong responsibility to help care and preserve [Chautauqua] for the community,” Stewart says. “It’s both a local and national treasure, and we really hold that in high regard. We try to do everything we can to make sure we’re doing our part to be good stewards.”

But, making a National Historical Landmark more fire resilient — especially when nearly 60 wood cottages, some more than a century old, are located at the wildland-urban interface — is a steep task.

“Being a National Historic Landmark, we are always trying to balance preservation with sustainability, and this wildfire initiative is tricky. It’s an art, really,” says Jason Hill, CCA’s chief operating officer.

Chautauqua staff have been working with local consultants and volunteers to reach the low hanging fruit of fire mitigation — expanding defensible space, trimming and removing ignitable fuels and incorporating fire-resilient plants (those with high moisture content or deciduous plants).

This summer, the reconstruction of the original 1899 Chautauqua Café implemented fire prevention techniques like using building materials that are less ignitable.

Chautauqua already dipped into grant money to install gutter guards on all CCA-owned buildings — an installation Hill calls a “no brainer” because of its limited visual impact on the buildings.

The best uses for the remainder of the grant money is still being discussed.

Hill says they’ve made efforts to expand irrigation along the perimeter of buildings, and are looking into putting sprinkler heads on buildings to extinguish fires.

They’ve also been experimenting with adding screens around foundations where there are open areas embers could sneak into, a method Hill thinks could be a win-win from a preservation and land mitigation perspective.

But, staff are hesitant to implement other popular fire-mitigation techniques, like re-siding with a less-flammable material, like cementitious siding, because it could compromise the preservation of the structure.

Hill, who self-describes himself as a “preservationist at heart,” says using a material other than the original wood, even if it looks like wood, would be tough for him to swallow.

“There’s some real concerns about what [using cementitious siding] means from a preservation perspective, from a historic building perspective,” he says.

But, Chautauqua staff are seeking to understand all the preservation and mitigation tools they could use to protect the grounds.

“Really, it’s a balancing act,” says Stewart. “How do we preserve the historic character of our campus while adopting fire prevention initiatives? It’s something we take seriously, but it’s a challenge.”