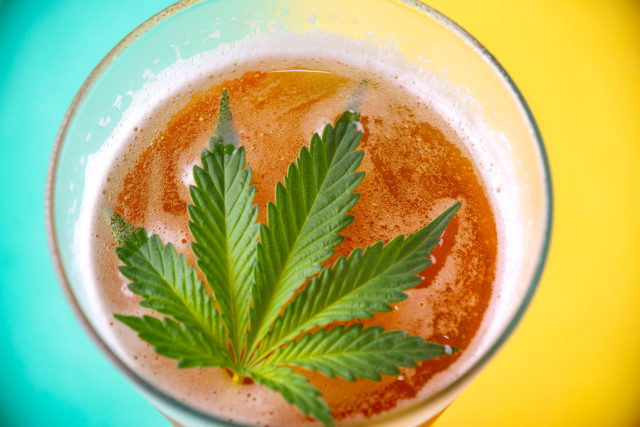 As the environmental specialist and small business consultant for the Colorado Department of Health and Environment (CDPHE) Kaitlin Urso worked specifically with breweries in 2016 and 2017, and then with cannabis businesses from 2018 to 2021. Over those five years she learned a lot about Colorado’s brewing and cannabis industries, and two facts stuck out to her: one) that brewing beer produces a lot of excess carbon dioxide, and two) that the process of growing commercial cannabis requires a lot of carbon dioxide as an input.

So, when she came across Earthly Labs’ system, which captures carbon off of brewery fermentation tanks, then compresses and stores it, something in her mind clicked. She decided to run an experiment.

“At every single craft brewery in the state and across the nation, the default is to vent all of these CO2 emissions from the fermentation tanks to the atmosphere,” she says. With EarthlyLabs’ technology, though, that waste could be reused in a closed loop circular economy, connecting two of Colorado’s most iconic industries in a sustainable partnership.

“It was a great way to take what would be a waste from the brewery and utilize it as an input commodity for the marijuana facility at a discounted rate,” Urso says.

In 2019, Urso reached out to Denver Beer Company, The Clinic, and Earthly Labs to bring the three small businesses together to plan a pilot project with the CDPHE. Using Earthly Labs’ system, Denver Beer Co would trap the carbon dioxide coming off of its fermentation tanks, keep some of it to charge kegs before distribution, and then sell the excess to the cultivators at The Clinic, who would use the locally produced carbon dioxide to feed plants.

Currently, cultivators get carbon dioxide from traditional suppliers, who capture it as a byproduct from combustion at power plants. That’s still sustainably obtained, but it isn’t a perfect system. It has to be shipped from a power plant to a distributor, and then out around Colorado to the grow operations using it. By contrast, Earthly Labs’ technology allows a brewery just blocks away from a cultivator to provide that carbon dioxide, negating the emissions associated with distribution. And, Urso points out, it’s higher quality carbon dioxide as well.

“The CO2 coming from the natural fermentation at the brewery doesn’t have the same hydrocarbon contamination as when it’s sourced from combustion,” she explains. “When we looked, it was more pure than medical grade or laboratory grade CO2.”

The pilot officially lasted for one year and according to Urso, it was a huge success. The Clinic used Denver Beer Company’s carbon dioxide to grow a strain they called 93 Hoppy Trees that hit the shelves in July 2020 (and sold out extremely fast). And the partnership didn’t end there. The Clinic continued to buy Denver Beer’s carbon dioxide and use it to feed their plants for almost another year. The only reason the dispensary stopped was because Denver Beer Co expanded its taprooms, and needed more carbon dioxide to charge kegs for draft beer and didn’t have enough excess to sell to The Clinic any longer. Aside from that, the pilot lived up to every expectation. Every party was a winner.

“The brewery gets to go from just selling beer to selling beer and CO2,” Urso says. “On the marijuana side, they get to locally source one of their inputs and get it at a discounted rate.”

She says The Clinic was able to undercut carbon dioxide costs by as much as 20%, and Denver Beer Co was able to pay off all the equipment costs in just 18 months. The only hurdle to implementing this system across Colorado is the upfront cost, Urso says—because it’s relatively expensive.

“Businesses really just have to commit to doing it,” Urso says. “Both businesses need to commit to the costs and commit to a partnership and to recouping those costs.”

She suggests that cultivators and breweries could split the upfront expenses of installing the Earthly Labs equipment. Then they could pay it off together; or the cultivator could front the money and get carbon dioxide from the brewery for free until it’s paid off.

Alternatively, Urso suggests a third party could step in and create a service where multiple breweries and cultivators share the same equipment and the benefits of using it.

“This pilot was a success and a repeatable success,” she says. “We really only need a couple of breweries to step up and install this equipment. There’s lots of cultivators in the area that would gladly purchase the carbon dioxide locally at a discounted rate if the supply was there.”