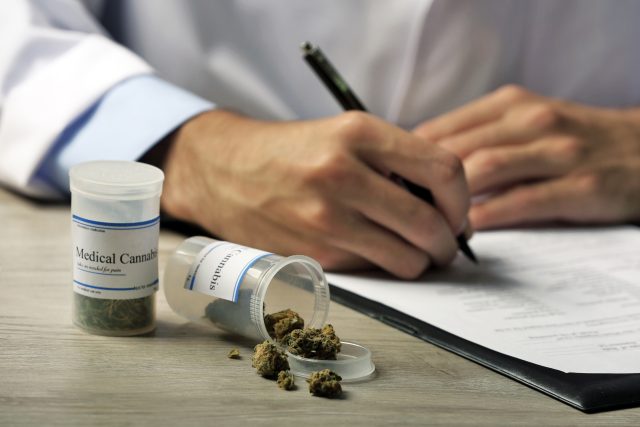 Boston was 10 years old when he started to exhibit symptoms of Tourette Syndrome. At first, he says he only had little tics. He’d impulsively clear his throat, or make clicking sounds. But it wasn’t severe, and it wasn’t distracting for him or others.

Then, around 14, when he was about to go into high school, the symptoms got worse — a lot worse. He started having vocal and motor tics nonstop, from the moment he woke up to the moment he went to sleep at night.

“He twitches, jumps, he might flail his arms. He can torque his head. And this can all be happening at one time,” his mother, Jill, describes. “He also experiences the audible tic, which is an urge to make noise.”

That uncontrollable, irrepressible urge makes him bark or woof like a dog when he has what Boston and Jill call “attacks.”

It was a dramatic change in Boston’s life. Jill says he lost almost 20 pounds in just a couple of months during this time.

“We started to look into the treatments,” Boston says. “We didn’t really feel like we wanted to take the pharmaceutical route because of how pharmaceuticals can be. So we took the eastern [medicine] route.”

He tried acupuncture, which he liked, but says didn’t really help with his symptoms. He tried CBD, which offered marginal alleviation. Then, he was out with his friends doing what teenagers do, and someone busted out some weed. Boston had never tried smoking before, so he gave it a shot. Almost instantly he felt relief. He “quieted out” he says. The vocal tics were all-but eradicated and his motor tics subdued.

“At first I was a little freaked out by it,” Boston says. “At first I thought I’d be getting in trouble, you know, because it’s cannabis.”

But when he told his parents what had happened and what he’d felt, he wasn’t in trouble. In fact, his parents felt relief of their own.

“Once they realized that it helped me, we committed to it,” Boston says.

It was an easy and natural course of action from Boston’s perspective. Here’s this flower, and when he smokes it, the urges he’s constantly battling and that are so often controlling him, subside. It’s a natural, non-addictive substance that, lucky for him, is legal in the state he resides in. Cannabis seemed like an ideal treatment option.

However, for his parents, and his mother in particular, it wasn’t such an easy thing to grapple with.

“We grew up hearing, ‘Well, you know, if you’re going to use it every day, you’re going to be a pothead and a burn out. You’re not going to be productive in your life,’” Jill says. “I had those stories playing in my mind because it’s what I was told.”

She doesn’t shy away from it: The rhetoric and propaganda of the drug war had gotten to her over the years. It had been ingrained in her, and to suddenly have to accept that this supposedly dangerous Schedule I narcotic was actually helping her son, and that he might become a regular daily user of it, was hard.

“I had to accept that the stigmas around [cannabis] that we were brought up with in my generation are not true,” she says. “That you can still be productive and you can function productively.”

It took some getting used to, she says. But seeing the results, and knowing how much it was helping Boston, there was no way she was going to deny this treatment option to him. And besides, Boston’s grades weren’t suffering and his creativity was as keen as ever.

They got Boston a medical card not long afterwards. Today they say they use a variety of different products, from tinctures to edibles, vape pens, oil and flower; because, as Boston explains, mixing up the form of consumption helps maintain the medicine’s effectiveness. Though, he adds, smoking flower helps the most.

Thanks to HB 1095, passed in May 2018 in Colorado, students like Boston can legally use cannabis to self-medicate during school hours — when they often need it most. Understandably, his tics can be extremely distracting to his learning and that of other students. So when Boston feels an attack coming on, he excuses himself, leaves campus and uses a vape pen to control his symptoms discreetly.

“Unlike other things, you can’t just medicate in the morning, at noon and at night,” Jill says. “With Tourette’s you have to medicate when it’s coming.”

Boston is a year and a half away from being able to walk into a dispensary and purchase his own medication. For now, his parents do it for him. But across the country there are many other young adults just like Boston who don’t have access to this treatment option at all. Because of the federal prohibition and Schedule I status of cannabis, a lot of people suffering from Tourette Syndrome will continue to suffer without relief.

And even in states where cannabis is legal, some parents might be too nervous and hesitant to try it with their own children — even if it may help them, and even if a doctor recommends it for them.

“Look at marijuana as an alternative to pharmaceuticals,” Jill says. “I would say try to let go of your judgments and your conditioning … I’m trusting my intuition and I’m still trying to serve [Boston] the best I can and in a way that he’s comfortable with, even if it makes me a little uncomfortable at times.”