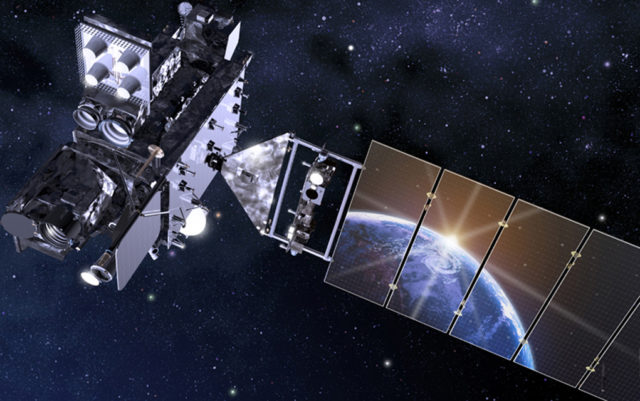 As the Atlas V rocket’s inferno lit up the night sky early in the evening of Nov. 19, 2016, it was as if the sun had risen again, illuminating the landscape. Looking out over the water toward the Cape Canaveral Air Force base, the blinding light overwhelmed my senses. So much so in fact that I hardly noticed how quiet the launch seemed to be. That is until the earth-rumbling wall of sound hit me right in the chest, followed a little later by the sonic-boom.

It is easy to forget in our everyday experience that light travels faster than sound. Sound takes roughly 25 seconds to travel the 5.4 miles from launch pad 41 to the Saturn V visitor center where I sat viewing the launch, but light takes a tiny fraction of a second to cross the same distance. As such, the thundering roar took all of us in the audience quite by surprise and provided the catalyst for our own thunderous roar of applause. It was at that point I consciously realized that I was witnessing an instance of humanity’s mastery over Newton’s third law of motion (for every action there is an equal and opposite reaction).

The precious cargo contained within the nose cone of the rocket was the  joint NASA/NOAA GOES-R (Geostationary Operational Environmental Satellite-R Series) spacecraft, the first in a series of four, which will extend the existing GOES system used by the National Weather Service.

GOES-R will provide advanced weather forecasting and monitoring, and will help track hurricanes and even tornado systems.

Part of the GOES-R spacecraft, the EXIS (Extreme ultraviolet and X-ray Irradiance Sensors) instrument, was built at the Laboratory for Atmospheric and Space Physics (LASP) at the University of Colorado Boulder. According to Frank Eparvier, the lead scientist for the instrument, “EXIS measures the absolute amount of light coming from the sun in the energetic, highly variable, short wavelength ranges.”

What this means is that EXIS can view the sun in the X-Ray and Ultraviolet part of the spectrum. The EXIS instrument is part of the space weather package on GOES-R. Space weather refers to the way in which particles from the solar wind interact with our own planet’s magnetic field and atmosphere, producing effects like the aurora borealis. This new instrument gives “increased dynamic range and accuracy” as compared to previous GOES satellites according to Eparvier.

EXIS consists of two components, the XRS (X-Ray Sensor) and the EUVS (Extreme Ultraviolet Sensor). Heather Passe, mechanical engineer at LASP who did the mechanical design work and led the build for the sensor, says that “the XRS looks at coronal mass ejections from the sun.”

A coronal mass ejection (or CME) is essentially a titanic explosion expelling a hot charged plasma from the sun hurtling outward, sometimes in the direction of Earth. If the solar wind is a breeze, then think of a CME as a massive storm. “XRS greatly improves accuracy, and introduces the ability to locate which part of the [sun’s] disk is active during a flare,” Passe says.

CMEs are often accompanied by large bursts of X-ray and Gamma-ray radiation called solar flares. XRS is finely tuned to detect these X-rays and “provides the first indication that a flare has occurred on the Sun and how strong it is,” says Eparvier. This gives us advance warning of dangerous energetic particles headed our way which “can affect or damage satellites and astronauts.”

Leading up to the launch, there were several small delays that nearly caused the spacecraft to miss its window, which would have pushed the launch of GOES-R to some later date. Fortunately, that didn’t happen. The first of the delays turned out to be a false sensor reading. The second delay was somewhat comically “due to a boat wandering into the down-range area. … I’m sure they were quite surprised when the Coast Guard came to escort them into the clear,” Eparvier says. “Launching a satellite is a complicated business and delays are expected. I want a good launch that works, so rushing the process is not a good idea.”

Originally scheduled for Oct. 13, 2016, the mission had seen several launch delays. It appeared as though another delay may be announced at any minute. But in this case, the team prevailed and successfully launched their payload into orbit at literally the last available minute of the launch window.

Passe, who has worked on the project since 2007 had this to say about those final moments: “The entire hour-long launch window was gut-wrenching. I was so nervous. It was gratifying to see GOES-R launch, especially after a solid hour of worry that it wasn’t going to go. Something I helped to design and build is now out in the world, functioning and serving science.”

Data will begin to come down to Earth early in 2017, followed by what’s called the commissioning phase, which involves verification of the spacecraft and analysis of the data to ensure that all systems are functioning according to their requirements. This process will take about a year, at which point the spacecraft will enter into full operation. Over the course of the project at LASP, “over a hundred people including scientists, engineers, technicians, accountants and students [have worked] on the project,” Eparvier says. The Boulder-based lab will also provide the EXIS instruments for the remaining three satellites in the series, GOES-S, GOES-T and GOES-U, ensuring many more years of involvement for CU.

More information on GOES-R and the EXIS instrument can be found at goes-r.gov.

Josh Elliott is a Scientific Programmer and Professional Research Assistant at the Laboratory for Atmospheric and Space Physics, CU Boulder.