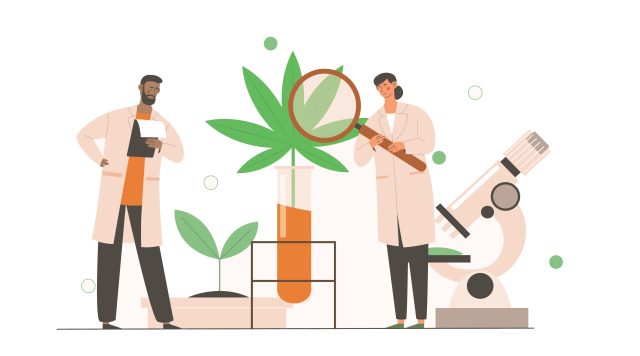 Erin Johnson was enrolled in the University of Colorado Skaggs School of Pharmacy and Pharmaceutical Sciences when she took her first cannabis class. As a student of pharmaceuticals, she says she naturally found the subject fascinating — especially since her father had been growing cannabis since the early days of medical legalization in Colorado.

“My dad is a farmer and he grew cannabis as a caregiver,” Johnson says. “His friend’s wife had breast cancer, so he was growing it [for her].”

Learning about the medical and chemical properties of cannabis in an academic setting excited Johnson. So much so that after graduating from the CU School of Pharmacy, she went on to complete CU’s new graduate certificate in cannabis science and medicine.

Now she’s making a cannabis salve for her small Colorado mountain community. She calls it Butter Flower Balm, and it’s a product of both her passion for natural medicines and of her CU cannabis education.

Johnson isn’t the only student from CU School of Pharmacy who’s pursued an interest in cannabis through the school’s new certificate program. According to David Kroll, a professor with the Skaggs School of Pharmacy, they’ve got a mix of health professionals, students of science and people already in the cannabis industry enrolling in the new program.

It’s becoming more robust every semester, Kroll says. There’s a genuine interest in this plant, its medicinal properties, and the industry growing around it. And until recently, there wasn’t an academically accredited way to learn about it. A survey of health professionals by the Mayo Clinic found only half said they were prepared to answer patient questions about medical cannabis, and three-quarters wanted to learn more.

Realizing that, in the spring of 2020, CU started offering the Cannabis Science and Medicine Program as an eight-week continuing education (CE) certificate.

“We’ve always felt that we have a responsibility to patients and to practitioners to give evidence-based information about plant medicines,” Kroll says.

The response was so positive, the school decided to take it a step further. In June of 2020, CU announced it was going to offer graduate-level cannabis education, becoming the first school in the state to do so.

For the coursework, CU tapped its own faculty as well as utilizing experts from outside academia. They bring in clinical practice experts, clinical researchers, medicinal plant chemists and pharmacologists, and legal and regulatory leaders in the cannabis industry to lead case-based discussions.

“We want to give students the tools that even if they can’t get a job in the cannabis industry, they can still get jobs in the dietary supplement, herbal medicine industry, anywhere,” Kroll says.

One student is doing their capstone with the Colorado Department of Public Health and Environment, compiling published drug interactions of THC and CBD with the top 200 prescribed drugs in the United States. Another is looking at the concentrations of specific terpenes in the same strains from different dispensaries, to see their chemical similarities. A third student is writing a series of science articles for Cannabis Wire about cannabis issues in New York City.

The certificate program requires nine-credit hours to complete, with an optional two-credit lab course. It costs $773 per credit (about $7,000 for the nine credits), and all of them can be applied toward a 30-credit hour master of science in pharmaceutical sciences degree with an emphasis on cannabis science and medicine.

The program also offers a full 30-credit hour master’s degree in cannabis science and medicine, with both a thesis track and a non-thesis track.

But the best part, Kroll says, is that all of this is offered virtually.

“Our whole thing has been flexibility for the student,” he says.

Johnson’s Butter Flower Balm is a budding business, and a direct result of seeds planted during the CU cannabis and science certification program. She makes the salve with almond seed oil, coconut oil, jojoba oil and extract from cannabis plants she grows herself, outdoors, without any pesticides or chemical supplements.

Johnson says she’s not trying to get rich off of Butter Flower Balm — but as long as it’s helping people, she’s going to continue making it.

“I have enough people in my life that love [the salve], even if I don’t make any money on it and I can just help people… I’ll continue to make it until the end of time because I love it,” she says. “It’s a total labor of love.”