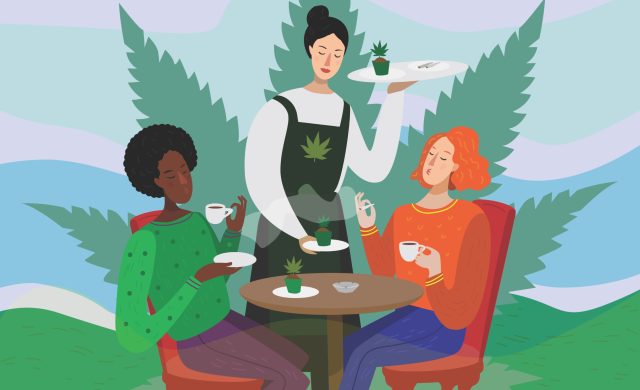 Colorado has a lot of cannabis dispensaries. As of 2018 there were just over 14 dispensaries for every 100,000 residents, according to Verilife. There are over 250 in the Denver metro area alone. If anyone wants to know where they can legally buy weed, directing them is as simple as pointing down the block or across the street.

If, however, someone wants to know where they can smoke weed legally, that’s not so simple to answer. It’s still illegal to publicly consume cannabis almost anywhere in Colorado. It’s forbidden in public spaces, or on national or state property (like parks, monuments, conservatories). It’s prohibited in any venue that sells alcohol (like bars or concert venues) as well as any venue that allows children (like bowling alleys, arcades or theme parks).

So where are people supposed to legally smoke their cannabis?

At home, according to the state. Even though cannabis has been largely accepted as a legal substance in Colorado, even though it generates more tax revenue than any other industry here, and even though, in reality, people are out there smoking weed all over the place, doing so legally requires privacy.

Obviously there’s still stigma stuck to this plant. But there’s more to Colorado’s lack of social consumption businesses than that, because cannabis consumption lounges are technically “legal.” In 2018 the state passed SB 211, the Marijuana Consumption Club License bill, which created licenses for businesses that wanted to legally sell cannabis and allow consumption on site. In 2020 the legislature also passed HB 1230, the Cannabis Hospitality bill, creating a legal pathway for cannabis hotels and bed and breakfasts. And some businesses, like The Joint Coffee Co. in Denver, even allow for Bring Your Own Cannabis (BYOC) consumption — which can also be done legally.

The framework for social consumption businesses has been set up — so where are they? Why aren’t cannabis consumption lounges as abundant as cannabis dispensaries?

Chris Chiari, the owner of the Patterson Inn in Denver, says licensing fees and regulatory requirements are a huge barrier of entry for most entrepreneurs. Chiari has been working to open Colorado’s first cannabis lounge and hotel at the Patterson for years now. As he openly admits, just getting started requires a lot of resources and time, two things budding businesses don’t often have.

Applying for a cannabis consumption lounge license in Denver is a multi-step process that requires a zone use permit, a floorplan, and documented affirmation from the neighborhood you want to operate in, that they actually want your business there. The permit costs $1,000 a year. The location has to be 1,000 feet from any school, place of worship or public playground, and cannot advertise within 500 feet of any of those establishments. There’s also specific requirements for HVAC capabilities in a business that allows smoking indoors.

Navigating all of that usually requires extensive legal help, which is expensive on its own. Add to that the cost of finding and acquiring the perfect location, the cost of applying for all these licenses and paying for the permits, the cost of installing adequate HVAC, all on top of the cost of actually building your business, renovating, marketing and advertising.

And even then, after you’ve jumped through all those hoops and signed all those checks, how lucrative is the business? How many customers will show up regularly to buy weed, hang out and smoke around strangers?

There’s a reason why cigar bars sell alcohol. The draw of social consumption on its own isn’t typically enough to cover the costs of operation.

Which is why Chiari isn’t just building a social consumption hotel at the Patterson Inn. The way he sees it, building a “cannabis castle” that’s only focused on weed does no one any good. Instead, he’s trying to establish the Patterson Inn as the first cannabis lounge, hotel, restaurant and bar in the U.S.

“As a company, we have found a way to facilitate the coexistence and cohabitation of these conflicting licenses through sound structure and through the strict separation of where they occur as far as consumption of cannabis and sale of alcohol,” he explains.

Essentially, the businesses are separate, with separate licenses, operating on the same property. The alcohol is served by the adjacent 12 Spirits Tavern. And cannabis consumption will only be allowed in the cannabis lounge, which Chiari is currently in the process of building.

“The normalization and de-stigmatization of cannabis is my passion and life’s mission right now,” Chiari says. “I’m excited to be in this position and I’m looking forward to getting across that finish line.”

It’s been a legal puzzle to work out. But he’s close, Chiari says. The licenses have all been acquired, the permits have all been paid for, and he owns the historic building at 420 11th St. in Denver. Now he just has to finish renovations, meet a few more regulatory requirements with the city and, he hopes, some time this January the Patterson Inn will open for business.