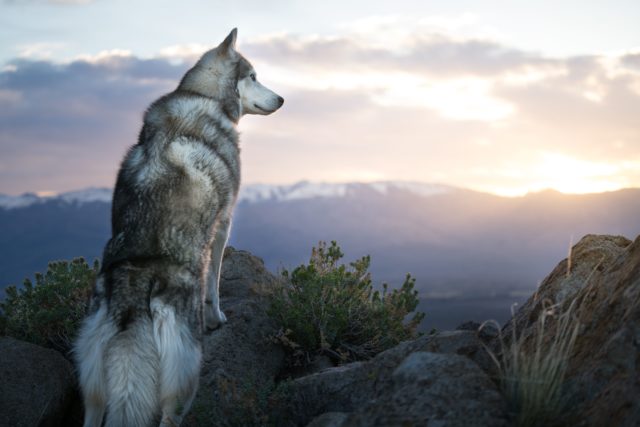 I’m not a pet person. It’s not that I don’t like animals. Like people, it just takes me time to warm up to them, to let them in. Loyalty isn’t a given, it’s earned. Relationships take time to develop, built around proximity and shared experiences, mutual proven reliance on each other in good times and bad. Too often, I find, people expect me to freely offer up my affections to pets I hardly know.

Why would I pet an animal without knowing its personality? Its health history? Its hygiene?

Why would I offer pets access to my love and care when we’ve only just met? Why would I give them all of my attention when there are so many humans to get to know?

I can’t just accept pets’ cuteness as a sign that they’re good-natured, friendly, trustworthy. I have to observe it, witness it, experience it.

This is why I’ve always been skeptical of cats. They usually gravitate to the one person in the room (me) trying to avoid them at all costs. Are they rubbing up against my leg to genuinely show affection? Or are they simply meeting their own need for physical touch? Maybe even using their purr to manipulate me into liking them, stroking their own ego, before they slink away? Any person acting this way I would find likewise repulsive.

But this isn’t about cats. It’s about dogs, one dog in particular — Astroman, Astro for short — named after his owner Cody’s favorite Yosemite climb.

Before I knew Astro well, I saw him charging along the lakeshore from a distance, the Eastern Sierra Nevada Mountains filling up the sky behind him. A Canadian wolf-dog, he elegantly galloped across the dusty sand, chasing nothing in particular, as we motored closer. Easily mistaken for a coyote, he was wild, slightly terrifying, but also alluringly beautiful — abundant white and gray fur, a thick neck, dark, deep eyes. There wasn’t a person in sight, and we debated going in to shore, unsure of this animal we would encounter.

Then, as we came around the corner to dock, there was Cody on his small Hobie Catamaran with bright orange sails, comfortably trusting Astro to run uninhibited along the expansive shore. When called, Astro returned just as quickly as he had left.

Needless to say, later, when Cody and his wife, Cherise, asked to move in with me, bringing along Astro of course, I was skeptical. Who was this dog and what kind of roommate would he be? Would he eat the leftovers on the counter when my back was turned? Or bolt out the door if I inadvertently left it open? Would he demand my attention when there was work to be done? Would his energy take over the house, robbing me of the detachment from others I’d easily cultivated in just a few short weeks of living alone?

But Cody and Cherise were convincing: Astro may be big, and hairy, and full of energy when he’s outside. But inside, he’s gentle, even mellow, they said.

I don’t like pets, I counter-argued. I can’t trust them.

Eventually I relented, and Astro proved me wrong.

Although aware of his need for others, Astro was never needy.

And I quickly grew used to having him around.

On walks, runs and hikes, he’d run free but circle back to me every so often, especially when other pets or people came close, allowing his loyalty to overcome any curiosity he had about the newcomers. Around town, he’d ride in the back of my truck, and stay there, unleashed, as I ran into the store, the post office, the coffee shop, never disappearing from where I last left him.

Astro was there for late-night deadlines and early mornings, when I’d come down to the kitchen to make coffee, only to find Cody already awake and working away. I was newly pursuing journalism, Cody had his eyes set on adventure photography and videography, teaching himself how to artfully capture the perseverance of the human spirit to the backdrop of breathtaking landscapes. Astro was there as we all talked about the hustle — the balance of enjoying the slow pace of life living in a small town affords, and the desire to contribute to the world around us, not forsaking the meaningful life for an easy one.

And Astro was there, lying on his bed in the corner, as our living room transformed into a gear shop, sponsors sending copious amounts of winter expedition jackets, mountaineering boots and camera equipment, as boxes piled up in my room. After just six months of living together, it was time to go our separate ways — me to Colorado in pursuit of a writing career, Cody and Cherise to Nepal for their most ambitious project to date: to film a record-breaking ascent of Annapurna. It was a place and a people that quickly captured their hearts, as earthquakes rattled the country and upended their plans. But they didn’t know that yet, as they prepared to go. We were all full of anticipation, maybe even hope, of what the future could bring.

Astro, though, was staying behind, first with me and then when it was time for me to go, with other friends.

Astro visited me in Denver, my first Christmas here. Cody and Cherise had been traveling in their Sprinter van around the Southwest, filming epic slackline and base jumping stunts in Utah’s canyons before heading to see Cody’s family in the Midwest, where he had once created flower arrangements for Oprah. Astro stayed with me for a week, and we picked up right where we left off — easily falling back into a comfortable rhythm of life. That week, Astro and I walked around the city, leashed up, equally curious about the world of concrete and asphalt we now found ourselves in, making sure to stick close to each other as people — so many people — passed us on the sidewalk, in traffic, in a hurry. We’d get back home and breathe a sigh of relief, spending the evenings laying around the house, or frolicking in the snow in the backyard, free.

Soon it was time for him to leave me, onto the next adventure with Cody and Cherise. I followed him from afar — pouring over photos of him paddleboarding with Cherise on thawing alpine lakes, or winter camping with Cody in the snowy Eastern Sierra. I saw him playing with other friends as Cody and Cherise continued to return to Nepal, helping rebuild villages and schools, sharing the story of the people they met there with the world. As they began to pursue paragliding more and more, filling their social media feeds with far off places and mountains from home, I knew Astro was never far away.

The last time I saw Astro was this past Labor Day at Cody and Cherise’s house in the Eastern Sierra. A group was gathered for a barbecue, new friends and old, most of us from out of town, former locals who had moved on to bigger cities, chasing dreams that seemed so much smaller now. Maybe more urgent too.

After hours of reminiscing, laughing and crying, I went inside to warm up and cool off, take a breather from all the emotion. I found Astro curled up on his bed next to the dining room table. I just laid straight down next to him and buried my head in his fur, draping my arm across him and petting his head. And he let me for awhile, the two of us laying there together, before he decided it was all too much. He needed his space. He got up and moved to the other side of the room, laying down on the wood floor, leaving me his bed if I wanted it.

I think he knew.

He knew, at least as much as he could, that Cody wasn’t coming back. That Cody was gone.

Despite his shoes by the sliding door and his jacket hanging on the coat rack. Nevermind his toothbrush on the counter in the bathroom or his clothes still in the closet. Forget his gloves left on the workbench in the garage, next to muddy mountaineering boots waiting to be cleaned. Or his desk still set up in the living room, hand-scrawled notes next to his keyboard, his computer poised to edit.

Astro was like the rest of us — he was OK, until he wasn’t. Until he wanted to retreat to his own corner, lay his head down and try to forget that Cody was no more, at least not in this earthly sense. He had gone out flying one day and never came back, and we all were at a loss trying to understand. How could someone who lived so fully, pushed the boundaries of possibility so hard, cared for all of us so well, be gone? How could a friend we’d come to trust so deeply, someone who knew how to laugh but also challenge our perceptions of reality, leave? It’s so much harder to lose someone you’ve actually let in.

I didn’t linger long, taking comfort in Astro’s willingness to be alone among so many people.

I hugged Cherise and other friends goodbye, promising to “keep the dream alive” in honor of Cody and the expansive life he had pursued. I glanced back at Astro, his head resting on his crossed paws, staring across the room at a photo of Cody paragliding towards the Himalayas, and walked out into the dark mountain night — the sliver of moon just barely visible, the Milky Way radiantly filling up the black sky.