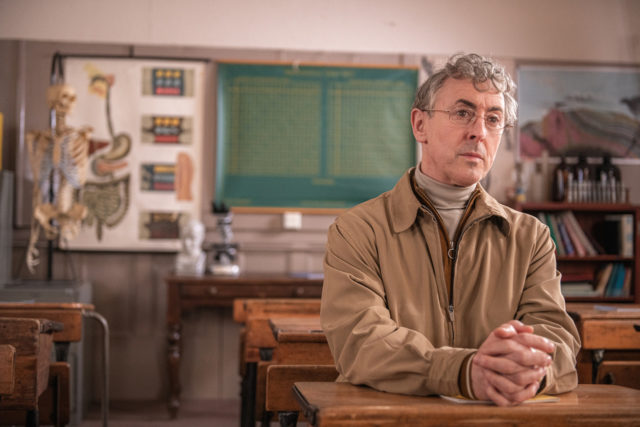 You know something’s amiss from the start. There’s something benign about the secondary school classroom setting, something pedestrian about the participants that makes your antenna immediately go up.

My Old School is all about performances. I’m dancing here, mainly because I don’t want to give anything away. Neither the story nor the players. And certainly not why McLeod wants to tell it.

Here’s what I will say: My Old School is a documentary by way of investigation. The main character, Lee, arrives at the Bearsden Academy in the posh part of Glasgow, Scotland, in the middle of the term. He doesn’t immediately make friends, but he does integrate himself into the school, first as a friend, then as a brainiac, finally as the lead performer in the school’s production of South Pacific. Everyone seems to like Lee, particularly a couple of the outcasts. One, Brian, because he has terrible taste in music; the other, Stefan, because he’s Black in a predominantly white school. Their interviews kind of break your heart once you learn what’s really going on. The others, particularly one of Lee’s teachers and the girl who starred opposite him in South Pacific, raise a slew of ethical questions.

That movie never came to be, but My Old School did. I can’t imagine this story told any better than the way McLeod does. Some things you gotta see to believe—especially when they’re true.

For more, tune into After Image Fridays at 3 p.m., on KGNU: 88.5 FM and online at kgnu.org. Email questions or comments to editorial@boulderweekly.com.