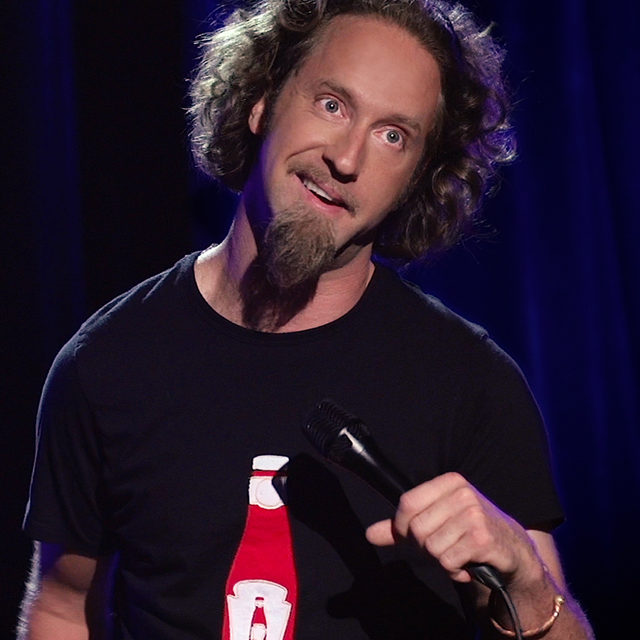 For Josh Blue, there is one clear-cut reason he’s a comedian.

“Oh, the pussy! You know that’s a nice side perk,” Blue jokes.

But really, for Blue, it’s about connecting audience members, even if they wouldn’t normally see eye to eye.

“I think it’s just being able to feel the laughter, getting a room full of randoms to laugh together at the same shit. … You get everybody to see the same thing. Whether you’re Republican, Democrat, white, black, whatever,” Blue says. “We all laugh at the same shit. It’s a pretty universal amazing thing to be able to do.”

It’s been 10 years since Blue debuted onto the national comedy scene. After winning the fourth season of NBC’s Last Comic Standing in 2006, he’s since released a comedy special on Netflix, performed with the likes of Ron White and Carlos Mencia, been on several television programs such as The Ellen DeGeneres Show and Live with Regis and Kelly and much more.

A stand-up comedian with cerebral palsy, Blue’s comedy has brought disability awareness into the spotlight, though it was never necessarily his goal to do that. He would rather be leading by example than preaching to an audience. There are, of course, parts of Blue’s comedy that do focus on what it’s like to have a disability.

“The disabled community is the largest minority group on the planet, because they pile us all together. If you’re blind, get in the pile. If you’re deaf, help the blind guy find the pile. If you got one leg, hop on,” Blue says in his special Delete.

Blue has been practicing his craft for around 16 years, beginning first when he was in school at The Evergreen State College, where he performed a weekly show at a local coffee shop.

“Just the humble beginnings where you don’t even know that that’s a real career choice,” Blue says.

After graduating, it only took Blue a month to start performing in small local shows, which led to larger shows and eventually going pro.

Nearly 20 years is a long time to be performing, and Blue says his comedy has changed over the years. His early work featured mostly self-deprecating comedy centered around his disability, but now he focuses on humor that comes from the perspective of a disabled person. Blue’s most recent special, Delete, tackles a lot of issues Blue encounters in his own life, like travelling and airports, dealing with the limelight, interacting with police officers and Japan’s strange vending machines.

“You just get older and different views of the world. I feel like it’s smarter stuff; I don’t know that people necessarily like that,” Blue says with a laugh.

Blue’s comedic influences come from a variety of sources, namely comedians like Chris Rock for his raw and real humor, Mitch Hedburg for his delivery and Richard Pryor for his stage movement and writing talent. Blue pauses a moment before adding Salvador Dali to the list with a laugh.

Like most comics, Blue also draws a great deal of his comedic material from his daily life, inviting audiences to listen to experiences that are more personal than most comedians are willing to share.

“And I think that’s what people like, is I’m just so open and real with my experience and my trials and tribulations and am able to still laugh at it,” Blue says. “Because everybody’s got their own shit to deal with, but when you see someone else dealing with it, it helps you deal, I think.”

Living in Denver, Blue says the hardest part of comedy for him is travelling, where he has to deal with time zone changes, flying and worst of all, being away from his kids.

Blue will be performing an hour of new material at the Dairy Arts Center in Boulder on Oct. 28, featuring comedy focusing on his kids and his divorce, but leaves a hint of vagueness on what he might come up with before the show.

Regardless of what Blue has his sights set on for the future, it’s clear that he’ll always be a comedian.

“I’m always going to be a stand-up. That’s my first love and that’s what I truly have a gift in,” Blue says. He loves to make people laugh and is very grateful to his fans for helping him get to where he is today, so rest assured more funny will always be on the menu for Blue.

Going forward, Blue says he has a lot on his plate besides comedy, “in order to not be mundane.” He would like to write and direct movies, continue working on his book and on television shows, and on being a good father. Blue is constantly looking forward, always wondering what the next step will be, how he can be open to new experiences and how he can keep adding things to his life.