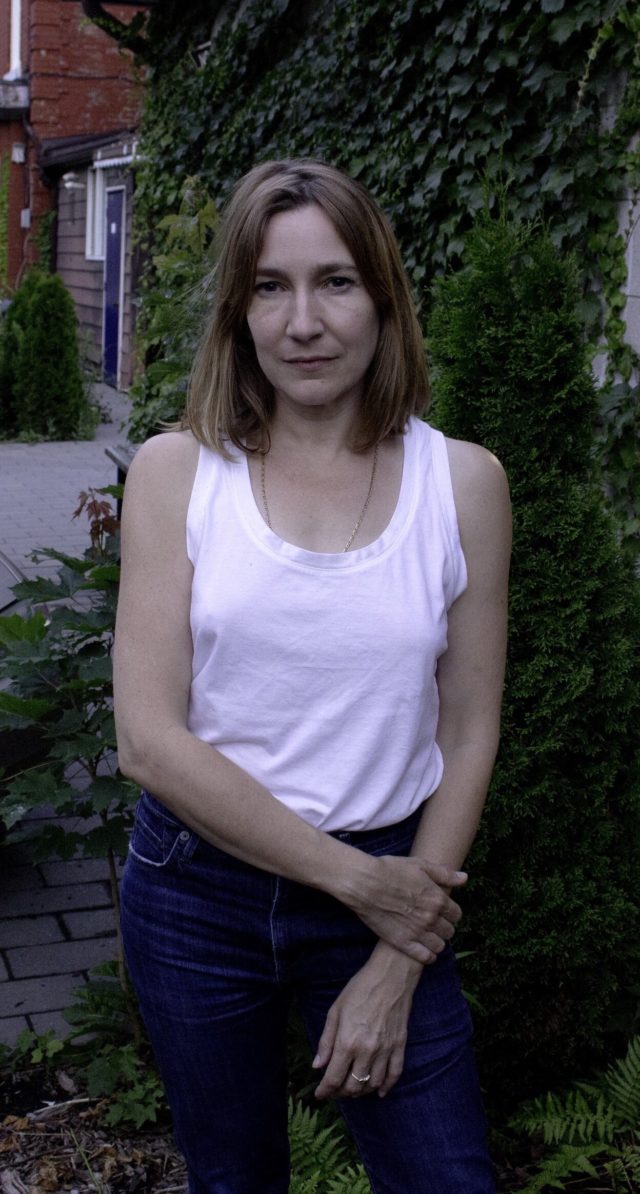 No one seems ready to define Pure Colour besides the author herself. “I just see it as a novel,” Sheila Heti says after waking from a nap in her home in Toronto, Canada—which is exactly how she subtitled the book: A NOVEL. But a novel, she says, “can be so many things. Any account of the world or human experience that draws in the imagination and tells some kind of story, however oblique, is, to me, a novel.”

Throughout Pure Colour, stories about loss and its twin relation, love, are exposed as flares of magical realism alight tracts of philosophical dialogue. In this version of existence, God is an artist and humans his subjects. “After God created the heavens and the earth, he stood back to contemplate creation, like a painter standing back from the canvas,” Pure Colour opens. “This is the moment we are living in—the moment of God standing back.”

When we meet the humans—Mira and her father, and Annie, Mira’s lover—the earth is beginning to heat up “in advance of its destruction by God, who has decided that the first draft of existence contained too many flaws.” What unfolds is life in the age of God’s criticism; to collect feedback, God appears in the sky, splits, and manifests as three critics represented by three archetypes: the birds, interested in aesthetics and order, harmony and meaning; the fish, concerned with the health of the collective rather than the wealth of individuals; and the bears, devoted to singular, deeply affecting loves. Each of these spirits assume their godly duties by inhabiting humans, peering through their senses, taking notes.

When two god-infused humans come in close proximity, sparks fly. “It is like turning on a light in a darkened room. We might remember that moment of seeing better than any of the other moments in our lives,” Heti writes; a magnetism appears: “There is a new orientation to life and the self when the eyes of the gods are upon you.”

This happens when Mira (who identifies as a bird spirit) meets Annie (a fish spirit) at the American Academy of American Critics, where, as students, they contemplate the reasons humans turn to art, if not “to locate within themselves that inward-turning eye, which breathes significance into all of existence—for what is art but the act of infusing matter with the breath of God?” It seems we’re inclined to seek God, to work beside him in the medium of art, because we yearn for help filling gaps in our understanding of how and why the world works—for “God had done pretty well: he had given us life, and he filled in most of the blanks of existence, except for the blank in the heart.”

Mira loves art, which is why she’s drawn to criticism, but she also loves her father (a bear spirit), who’s back at home dying while Mira experiences the world with Annie. The tug-of-heart-war grows more tense once Mira’s father dies, and grief sets in; discombobulated, swaying between a profound sense of peace and the temptation to abandon life, Mira’s pull toward Annie—toward life in a world that, even God admits, is far from perfect, thus difficult to understand—makes the path ahead feel tough to navigate.

What to do? and When to do what? are questions Sheila Heti has kept in her orbit for years—her fifth book and second novel, published in 2010, is titled How Should a Person Be? and probes and portrays artists, including narrator-Sheila, as they struggle to answer the titular question.

Pure Colour, similarly philosophical in tone, follows Heti’s 2018 book, Motherhood, a polarizing exploration of what is gained and what is lost when a woman becomes a mother. While writing Motherhood, Heti says she began perceiving time differently, feeling “the presence of a larger time frame.” Most of us consider our existence on a timeframe confined to our lifetimes—if you’re 30, you situate yourself between the 30 years you’ve already lived and the rest of your expected lifespan. “But these timeframes are just so small,” she says.

“I started thinking about my lifetime as being a continuation of my mother’s lifetime, which was a continuation of her mother’s lifetime, and I began to feel that the soul doesn’t only live in one’s own body, but it lived, or lives, simultaneously in the bodies of one’s ancestors,” she explains. “This makes you feel less like the center of your experience—or experience period—which is a good feeling, and true.”

She massages this concept of soul-continuity throughout Pure Colour, reconnecting us humans to a pulsing web of art, history and organisms that spans time, providing reminders to decenter ourselves from certain experiences that we’re tasked with during our time on earth.

At one point Mira recalls a stirring art seminar from the Academy that examined “The Apagarus,” a painting by 19th-century French artist Edouard Manet. “What if some of the spirit that had been Manet traveled through pigs and plants and people until some of it wound up in Mira, and this was why she was drawn to his paintings—because spirits draw their related parts close, like orphans seeking their kin.”

It’s a take on reincarnation that, when combined with Heti’s short, rhythmic sentences, harkens the work of German novelist Jenny Erpenbeck, whom Heti calls a genius friend. In Erpenbeck’s 2012 novel The End of Days, the protagonist lives five times, progressing a bit further in her life each attempt. In “Book II’’ (the second life), the unnamed narrator, a young woman in post-World War I Vienna, is also pulled between the vacuum of grief and the expulsion of desire: her best friend dies and the now-ex-boyfriend asks her to spend the night, so she follows him, “lying down in the bed of her friend, lying for the first time beside the man whom she had loved ever since he returned home from war that past December like someone she’d never seen before. What? She lies down in the place of her dearest friend, who has been dead only since the morning, 3:20 a.m. The end of a day on which a life has ended is still far from being the end of days.”

At the beginning of Pure Colour, Mira is paying her bills working at a high-end glass lamp store, tasked at the end of each day with turning off the lamps, a chore requiring 11 tedious minutes of pulling “the chords with a gentle sort of care.” Mira gravitates toward one, the least expensive lamp: “There is no point in loving something that is not a bit within reach,” she considers, reaching for it—suddenly a symbol of the power of perspective, of contextualization. The cheapest lamp becomes Mira’s most luxurious possession. Sitting in its glow, Heti writes, “She loved her meagre little existence, which was entirely her own.”

When her father dies, however, existence grows more confusing as his spirit, upon leaving his body, binds to her; the shifting energies demand she pause, reflect—and so she visits an old water-logged tree that she’d once visited with her father decades prior. She strips and dives into the water, and is swept up, up, up into the tree, sprouting as a leaf, where she dialogues with her father’s spirit. He advises her in blended conversations that quickly obscure who’s doing the asking and what passes for answers:

“My basic premise is that in life, you live forever, because as soon as you die, you don’t realize you’re dead, so you’re kind of always alive, so the thing is, you shouldn’t worry about yourself. The only ones to worry about are the people you leave behind who might have needed you. Right, like if you have little children or something. But otherwise? I mean, a hundred and fifty thousand people die in the world every day. That’s a huge number, and life goes on. It’s not a big tragedy, so it’s not worth worrying about. Yeah, and I mean, what’s the alternative? Well, there is no alternative. That’s what I’m saying, what’s the alternative?”

It’s Annie who eventually pulls Mira out of the leaf, as she comes to sit under the tree, stoking Mira’s desire to return. The comforting sense of smallness that Mira found in the leaf compounds, claustrophobia sets in; Mira bursts from the leaf, leaving her father’s spirit behind, landing more grounded in herself. “In the moment of being stripped,” Heti writes, “a person becomes more clear to themselves.”

During the writing of Pure Colour, Heti lost her own father—an experience that seeped into the book and clarified the roles that art and literature can play in life. At one point, Mira, reminiscing about a long-ago afternoon, remembers her father’s promise to give her “all sorts of mysterious, rare and marvelous things, including pure colour—not something that was coloured but colour itself!” A jewel-like disk that “turned inwards … for its outside was what it was all the way through.” It’s a familiar sensation, picking any random page in Heti’s novel and feeling her portrayal of the human experience resonate through and through.

“None of us can live enough different lives to get our entire worldview from our own experiences, so that’s one role of literature,” Heti says. For religious people, spiritual texts provide natural landing pads for advice on predicaments or sorrows. But where do non-religious people turn?

In the wake of her own father’s death, Heti turned to writing and reading, in particular Dostoevsky, as she began to process what came next: the unknown, a life sans a love. The more Heti lives, the more she believes it to be “a real loss” that many of us have no relationship to religious texts. “It’s hard to be a human being because we don’t really have the answers to any of our biggest questions,” she says. “I’m not sure because I’ve never been a religious person, but I imagine that if you have God, or a real connection with religious texts, maybe when you have those periods where there’s a sense of a void in the center of your life, that’s where you turn, and religion feeds you.”

Email the author at eathena@boulderweekly.com.