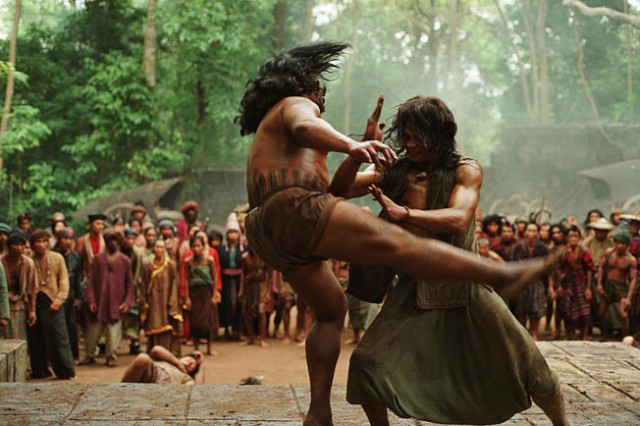 Bruce Lee is dead, Jackie Chan and Jet Li are slowing down, but the world of martial arts never sleeps. Keeping everyone awake these days is Tony Jaa, Thailand’s biggest action hero, who returns to inflict more damage in Ong Bak 2: The Beginning.

Given its title, you might expect that this film has some connection to the original Ong Bak of a few years back, but you would be wrong. The only thing that links these two pictures is its star, who is such a big deal in the action world that the Hollywood Reporter called the film “arguably the most anticipated Thai movie ever.”

It was especially anticipated because, according to reports in the Hollywood trade papers, Jaa, feeling the pressure of adding directing and action choreography to his credits, disappeared for a time during shooting, only to reemerge after a bout of self-described meditation to say he was A-OK and ready for renewed combat.

Actually, it’s kind of a shame that Ong Bak 2 isn’t a sequel or even a prequel to the original, which was set in contemporary Bangkok and featured a sequence where Jaa’s character ran through the markets and back streets of that city, using his remarkable physicality to leap over tables, glide between giant panes of glass and run across the shoulders of a mob of bad guys. It was a display of the phenomenal dexterity that is Jaa’s trademark.

Jaa’s graceful moves are the biggest attraction in Ong Bak 2 as well, but this time around his co-conspirators are a group of elephants. Seeing him leaping nimbly along the backs of a thundering herd of beasts is impressive, to say the least.

Elephants aside, the plot of this Ong Bak is rudimentary. It begins in 1431 in the strife-torn kingdom of Ayudhaya, where a teen named Tien (Nutdanai Kongtong) flees from soldiers and ends up in a slave market where he butts heads with tattooed evildoers and goes one-on-one with a crocodile.

Those exploits bring him to the attention of Chernung (Sorapong Chatree), head man of the Garuda Wing Cliff bandits, who offers to school Tien in all the martial arts after a blind seer opines that “when he holds a weapon, he can conquer the world.” Clearly, original dialogue is not Ong Bak’s strength.

That prophecy proves to be more truth than poetry when the adult Tien, played by Jaa, comes into his own and attempts revenge on the evil slave traders and the nasty folks who killed his parents. Only revenge turns out to be more complicated than he imagined.

Ong Bak 2 is slicker production-wise than the original, and it has so much noisy action that Thai foley artists must have made a fortune inserting thuds and grunts. According to the press notes, it features kung fu, judo, several kinds of Thai boxing and something completely new — a combination of Thai dancing and martial arts called Natayuth, which Jaa invented for this movie. No wonder he had to take time off.

After the actor proves his ability to take a licking and keep on ticking, Ong Bak 2 sets the stage for a yet unnamed sequel, but even if that doesn’t happen, it’s nice to know that Jaa has added some skills to fall back on. “Works and plays well with elephants” does not appear on every resume, not even in Hollywood.