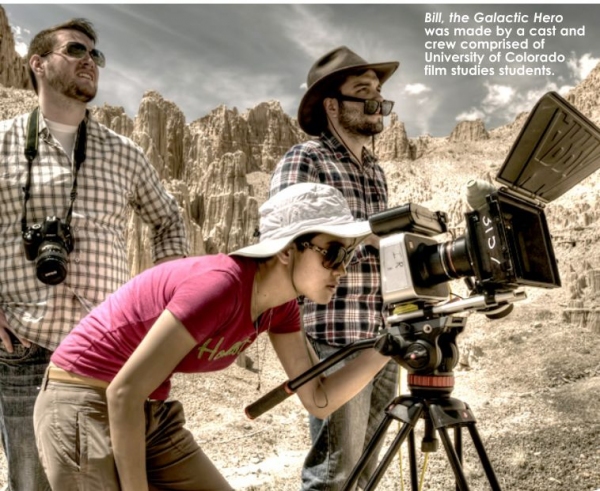 Is Boulder, Colo., the future of independent cinema?

Alex Cox seems to think so. The British filmmaker and assistant professor to the film studies program at the University of Colorado Boulder doesn’t just know a thing or two about this sort of thing; he’s doing his part.

Bill, the Galactic Hero, Cox’s most recent project, held its world premiere on Dec. 12 at Muenzinger Auditorium to two packed houses. But Bill is unique.

Bill, the Galactic Hero isn’t just an Alex Cox picture. It’s a film studies program and department of theatre and dance picture, with the art and art history department and aerospace engineering department lending a hand. Not your ordinary independent picture, Bill is an honest-togoodness, homegrown movie from right here in Boulder.

However, these sorts of things don’t just happen overnight. In fact, the history of Bill goes all the way back to 1983, when Cox was a 28-year-old University of California, Los Angeles, graduate who had just completed his first feature for Universal Studios, Repo Man.

Starring Emilio Estevez and Harry Dean Stanton, as well as a slew of actors who would become a sort of Cox Stock Company — Sy Richards, Miguel Sandoval, Zander Schloss, etc. — Repo Man went on to a modest amount of success, motivated primarily from its punk-themed soundtrack (headed by Iggy Pop). Roger Ebert of the Chicago Sun-Times wrote in his 1984 review, “Repo Man comes out of left field, has no big stars, didn’t cost much, takes chances, dares to be unconventional, is funny, and works. There is a lesson here.”

Walker was deemed too violent and Cox claims that it got him banned from future studio work, but it didn’t slow him down. He would go on to make movies on his own terms for the next 20 years (from this period Highway Patrolmen from 1991 and Three Businessmen from 1998 are his best), but in 2008 the bottom dropped out and Cox was left looking for a career.

“Up until 2008 it was possible to make something of a living from one’s back catalog as a filmmaker,” Cox told Boulder Weekly.

The recession put an end to that and with no money coming in from licensing, Cox — who just celebrated his 60th birthday on Dec. 15 — heard the words every artist has heard at least once: “My wife [Tod Davies, herself a writer and producer] said, ‘You’ve got to get a real job.’”

That job turned out to be as a film professor for CU’s film studies program.

“This was the Stan Brakhage School,” Cox explains. “So I had this notion a professor could be both simultaneously a teacher and an artist.”

Filmmakers working at universities to pay the bills while incubating other projects are nothing out of the ordinary. Brakhage taught at CU from 1981 to 2003 while continuing to work and experiment — quite prolifically — with cinema. For Cox, here was a chance to bring his long lost project to fruition.

Bill, the Galactic Hero (reviewed in the Dec. 11 issue) is a project that Cox tried to get done in 1983, but couldn’t. Cox was told the project was “too expensive and too anti-war” and the initial option for Harry Harrison’s 1965 novel lapsed. Harrison and Cox remained good friends with a working relationship, and a few years ago, brilliance struck.

“I said to Harry, ‘I’m at CU now, and what if you gave me an academic license to make Bill with students?’” Cox recalls. “[Harry] goes, ‘What’s an academic license?’ ‘I have no idea. I don’t know,’” Cox recounts, laughing. “‘But let’s figure it out.’”

An academic license meant that Cox and his students could adapt Bill for a film project without paying for an exclusive option, so if a studio wanted to buy the rights to Harrison’s novel, then both projects could move forward simultaneously.

“The deal was, nobody could be paid,” Cox says. “The film was to be made purely as a student project at CU, or some other film school, and that’s when we started the Kickstarter [campaign].”

“The Kickstarter [campaign] succeeded, at which point I had to come back and tell the head of the film studies department that it had come to fruition,” Cox explains. “The administration of the university said that the film couldn’t be commercialized, because if we were going to make money off of it then they would have to bill us for all the classrooms and student time and everything else.”

This made Bill a rarity in the filmmaking world —a film made purely for the love of the game.

Outside of the Boulder premiere, Bill played at the Alamo Drafthouse in Littleton, where 50 percent of the ticket prices were donated to the Humane Society of the South Platte Valley. Going forward, this is Bill’s modus operandi.

“Any theater who wants to screen it, can,” Cox says. “We’ll send them a Blu- Ray or DCP [Digital Cinema Package] if they’ll make it a charitable screening.”

It’s a novel concept for the future of independent cinema — homegrown products made on shoestring budgets by people with real passion who then let the product generate money for charity. Cox finds the experience “liberating.”

While Bill is only one movie in a sea of cinema, Cox says he believes this could be the beginning of something new.

“I think [Bill, the Galactic Hero] is good because it’s revolutionary, it’s anti-capitalist, it flies in the face of all the evil, conventional wisdom that gets imposed on universities and art and life,” Cox says.

For Cox, getting Bill in the can is the end of the project and he is now free to move on to the next project, but for Bill, the Galactic Hero, the story has just begun. The tagline “From the writer/director of Repo Man and Sid & Nancy” is certain to catch some eyes, as well as earn some programming slots, but at this stage in the game, Bill, the Galactic Hero is still very much a work in progress. Only time will tell if screenings of Bill can generate substantial charitable donations, or provide a jumping off point for the students who want to work in the entertainment industry, or if there is even a want for this type of moviegoing experience. The future is too vast for one movie to predict such a sea change.

That’s where Cox’s head is — not on dollars and cents, but value and entertainment.

“The market is so tight-laced and kind of formulaic now, you kind of wish it was still in the days of the New American Cinema,” Cox continues. “There were those independent producers out there who could take a chance, rather than just relying on Hollywood formula and soft money and state aid — the films that get made with a small amount of money with a passion.”

Passion may be key, but community is a necessity if the Front Range is going to support independent filmmakers.

Adventurous moviegoers on the Front Range are lucky enough to have dedicated programmers and exhibitors to make this endeavor work — people like Pablo Kjølseth for the International Film Series, Stephanie Rudy and Glenn Webb for The Boedecker Theatre and Ernie Quiroz for Sie Film Center as well as the two major film festivals, Boulder International Film Festival and the Starz Denver Film Festival. It takes a community and this one is primed. The venues are set and the programmers are here. Now all we need is the talent.

“That’s what I hope will come out of CU,” Cox says. “Some people will tend to drift toward the coasts, because they think they’ll find work in Los Angeles or New York, but maybe people, other people, will remain here after they graduate, and stay together and create their own art here.”