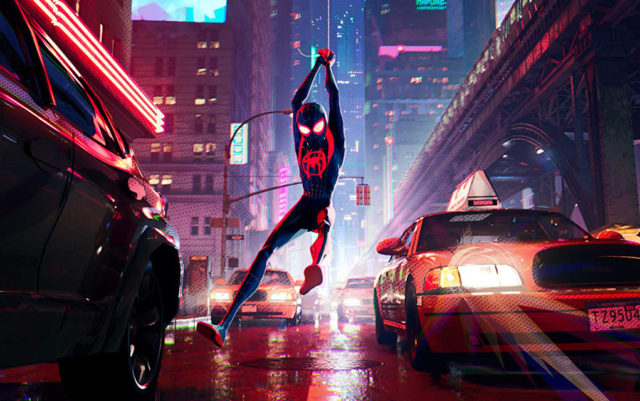 Watching Spider-Man: Into the Spider-Verse is the single closest feeling I’ve had to the first time I cracked open a comic book, beginning a lifelong love affair with a legendary onesie wearer. The same way Steve Ditko’s pencils popped my eyeballs, Spider-Verse explodes like a shotgun blast of pop-art, right to the kisser. Infused with the noblest parts of Stan Lee’s legacy, this is a film where a father and son repeatedly verbally and physically demonstrate their love for one another, where a talking pig and Nicolas Cage finally share screen time, and where reductive fanbaby arguments about inclusivity are gently smothered beneath the Kingpin’s love handles.

Miles Morales (Shameik Moore) is the second most authentic screen teen this year, trailing only Elsie Fisher’s Kayla from Eighth Grade. That’s right, the best coming-of-age movies this year involve Peter Porker, The Spectacular Spider-Ham and the directorial acumen of Bo Burnham, just as we all predicted. At the onset of Spider-Verse, there’s only one Spider-Man, and it’s not Miles. It’s Peter Parker, as voiced by Chris Pine, who is immediately eligible for eight quintillion nerd points by completing the quasi-impossible Star Trek, Wonder Woman, Spider-Man trifecta. Except, and I swear this isn’t a spoiler as it happens in the first 30 minutes, Peter Parker dies.

Prior to Peter Parker picking to perish, Miles is bit by a genetically engineered spider. His investigation into his arachnid love nip is what gives him front row seats to the squashing of Spider-Man by the Kingpin (Liev Schreiber). Spidey was trying to stop the rotund mob boss from borking the multiverse by firing up a shoddy Hadron collider. He failed, and the result is a bunch of Spider-people from different dimensions trapped in Miles’ world.

The paunchy, midlife-crisis-havin’ Peter B. Parker (Jake Johnson), from an alternate Earth, reluctantly takes Miles under his webbed armpit after a grand slapstick meet-cute at a gravesite. The dysfunctional duo aims to stop Kingpin and return the other Spider-folks home. This includes Spider-Man Noir (Cage), Peni Parker (Kimiko Glenn), Gwen Stacy (Hailee Steinfeld) and Spider-Ham (John Mulaney). If it sounds too crammed with characters and overly busy, well, I haven’t even mentioned a handful of other major characters. But please know that the hyperkinetic storytelling is purposeful, playful and most other positive, P-based adjectives.

From the hallucinatory animated approach to one of the best superhero soundtracks, Spider-Verse feels like the first major superhero movie genuinely made for today’s young people and not primarily made for older people who loved superheroes when they were young people. In so many important ways, Miles represents the best version and inspired evolution of Lee’s Spider-Man conceit. He is relatable to everyone but looks, talks and acts like a subgroup of Americans who have long deserved to see a mirrored reflection of themselves as hero on the big screen.

You bet your bottom Spider-buck that the overarching moral is the expected riff on “with great power…” But the film also deploys the concept of a multiverse as a sly argument in favor of inclusivity as a blessing and not a threat. Coyly, it says “Calm down. See! White Spider-Man is safe. But look how cool all these different perspectives are?!” Combine the artistic splendor with that message and you have one of the best movies of the year.