Seeking refuge from the June heat, student artists flocked to the air-conditioned Boulder Pottery Lab for its Saturday open hours. Inside the old Boulder Fire Department Station No. 2, the historic structure that has housed the pottery lab for the last 55 years, a handful of patrons sunk their fingers into cool, wet clay.

While the brick building, built in 1908, may have plenty of cool air, one thing it does not have much of is space. With stacks of plates and pots lining the walls and waiting lists for classes climbing to more than a hundred names, there’s enough interest in the pottery lab to fill an entire second facility, if it existed.

“You have to keep refreshing your page at 8 a.m. the day of class registration to get a spot,” says Caleb Smith, a student at the lab. “It’s not an exclusive system, but it’s just who gets there first.”

“In order to grow, we need more space,” says Kari Palazzari, the executive director of Studio Arts Boulder (SAB,) the nonprofit formed in 2009 that took control of the Pottery Lab from the City of Boulder in 2014. “There’s a ton of demand not being met. That’s not even thinking about the other artforms, just ceramics.” 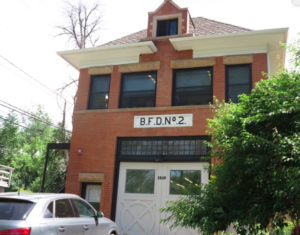 Fortunately for those aching to try their hand at ceramics or other studio arts such as woodworking or printmaking, SAB has plans to expand. After a 10-acre land donation from Trammell Crow Residential in 2014, the arts organization began planning an accessible and functional arts facility, which, in a best case scenario, will be ready for use at the end of 2020. In the agreement with Trammell, SAB received land valued at $1.5 million at Diagonal Crossing, a mixed-used development, for free but will have to raise funds for the construction of the estimated $5 million project.

In November 2017, Boulder voters passed a renewal of the Community, Culture and Safety (measure 2M) tax by an overwhelming 81 percent, securing funds for SAB and six other nonprofits to develop new projects to benefit the community. SAB is slated to receive $1.75 million from the tax, the largest amount granted during the renewal. But to receive those funds, the nonprofit will have to match the amount through an ambitious capital campaign that will take place over the next couple of years. Even with the donated land and the tax funding, SAB will need to raise an additional $2 million to fully fund the project.

“I’d be lying if I didn’t say raising $2 million was daunting,” Robert Crifasi, president of the board of SAB, says. “That capital campaign is going to be critical. That said, two years ago we didn’t have tax funds behind us,” he says with a laugh.

With the help of Barrett Studio Architects, SAB is working to develop an architectural plan in preparation to receive community feedback in the fall. The new studio will offer more space and resources for students and artists to work on ceramics, printmaking, woodworking, art blacksmithing and cool glass work — all mediums that are more difficult and expensive to practice at home. It will also likely include a gallery and new offices for members of the SAB administration, whose current offices sit in the former shower room of the fire station. By introducing a variety of studio art mediums, the organization hopes to encourage creative collaboration and interactions between Boulder artists, Crifasi says.

As for the firehouse, SAB has no plans to leave the building that Aaron Winston, the director of the pottery lab, says makes up a large part of the identity of the organization. For now, the organization plans to keep beginner classes in the older structure while freeing up space for more intermediate and adult classes in the new facility.

“It’s been ours longer than it was a fire station and it has been a great and much-loved facility,” Palazzari says.

Although the tax renewal was passed recently, the plan to expand from the firehouse has been part of SAB since its conception. When the organization first formed, the members of its board dreamed of creating a campus for the arts, one that would make studio arts education accessible to and affordable for the Boulder County public and beyond. Many of the founding members of the organization had ties to the Pottery Lab, so when the City was looking to lease the building in 2014, SAB’s takeover of the lab seemed a natural fit. And a needed one.

Since SAB’s founding, Winston believes there has been not only a local, but a nationwide increase in demand for the maker and studio arts movements.

“With our political climate, people have wanted to disconnect from that, put their phones away and actually do something physical, tangible and with their hands,” Winston says.

Palazzari speaks to some of the overarching benefits of taking lessons at the Pottery Lab, including finding a community where she could connect with people of different political viewpoints and backgrounds.

“It breeds empathy and connection across difference, which is critical for building community and for our civic conversations to be more civil and productive,” Palazzari says.

Although Palazzari emphasizes that increasing arts education can help any community, she also notes that Boulder is well primed for work with ceramics, where the final product rarely turns out as the artist plans.

“In Boulder, I think people appreciate having a well-rounded life. You can have someone who’s in tech, for example, and they’re also a bike racer on the weekends. People look at their lives in a very balanced way, and having a creative outlet is part of that,” Palazzari says. “A lot of people here understand that zen of living and they strive to live with that kind of awareness, not only being a whole person but also being able to roll with the punches a little bit and not be attached to particular things in a really dogmatic way.”

With Boulder’s focus on protecting the environment and fostering an active lifestyle, Crifasi says Boulder’s arts culture has fallen behind, especially compared to smaller cities like Santa Fe and neighborhoods like the River North Art District (RiNo) in Denver. He hopes the new arts facility will encourage a surge of appreciation for the arts in the area, as well as allow people to value the arts as an important part of a well-rounded lifestyle.

“I’m excited about it,” Crifasi says. “I think we have a pretty cool opportunity here and I really think it’s something we need in town. If you’re in a tech job or staring at a computer all day, wouldn’t it be really great to get your fingers into the mud?”