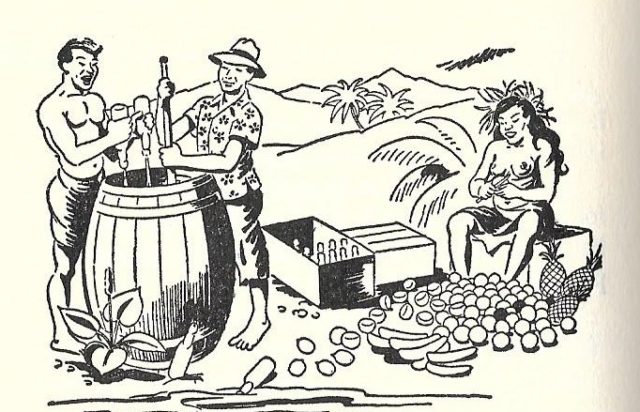 Like virtually everyone, I’ve fantasized occasionally about ditching the demands and moving to a tropical island to sip chilled beverages all day and live the mythical Margaritaville/Tiki/SpongeBob lifestyle.

After the pandemic trials and traumas, it’s easy to understand the appeal of Tiki bars, which provide an immersive Meow Wolf-like escape centered around sociability and strong drinks. That’s why Tiki spots are popping up all along the Front Range.

You are immersed in a maritime world the moment you walk into Swaylo’s Tiki Restaurant and Bar. The eatery was recently opened at 1315 Dry Creek Road in Longmont. Swaylo’s menu includes ahi poke, Hawaiian fried rice, smoked octopus tostadas and signature libations like hurricanes, blue Hawaiians and Cuba libre.

“Picture a haunted pirate ship that once housed a gaggle of magnificently gay pirates, now marooned on a phallically mystifying, bird-infested, tropical island of ill repute.”

What exactly is a ‘Tiki?’

While the inherent racism in foods associated with African American life has recently been called out and Aunt Jemima “retired,” Tiki culture has seemingly escaped criticism. Maybe it’s because there are so few Pacific Islanders in the population or because Tiki is such a fantasy mishmash of references, symbols and foods extracted from unrelated cultures across the globe.

Authentic Polynesian culture does not include coconut bras, grass skirts or frozen blue drinks. And, let’s face it, after the Charlottesville horror, tiki torches have lost some of their backyard appeal.

For starters, “Tiki” is a word from New Zealand’s Māori culture for an image or amulet of a human figure representing an ancestor. In other words, it’s a spiritual symbol. Should it be used on a glass used to drink high-alcohol cocktails?

Tiki as a concept was invented, or appropriated, by West Coast bar owners in the early part of the 20th century. That means our parents and grandparents were knocking back mai tais back in the day.

The Julia Child of Tiki food and drink

All this Tiki talk caused me to finally open my copy of the original Tiki bible I inherited from my parents. Published in 1946, Trader Vic’s Book of Food and Drink (Doubleday) was a bestseller penned by Victor Bergeron. The bartender, bar owner and rum distributor traveled through the South Pacific before World War II.

This is an important culinary book. Bergeron’s Americanized recipes for dishes like “Chinese chicken” and staging a suburban luau was a gateway for Americans to a larger world of tastes and strange ingredients like soy sauce.

In his snooty forward to Trader Vic’s, book critic Lucius Beebe’s notes that Bergeron “has contrived to make Oriental food not only sound enchanting but also extremely edible.”

Trader Vic’s Book of Food and Drink is bursting at the seams with racist language, misogynistic comments and offensive illustrations. Bergeron’s writing voice is very male, rat pack-y and built around the desire to drink overpowering cocktails with then-unfamiliar names like the mojito. Trader Vic’s recommends a drink called “The Fog Cutter”: “You can get pretty stinking on these, no fooling.”

Bergeron explains his beverage preference by writing, “I like rum. I like its history, too. … (Rum was) once the favorite libation of pirates, sailors, massacring Indians, beachcombers and loose women.”

Throughout his survey of global islands and their cocktails, Bergeron delivers some hard-to-swallow white colonial tidbits. For instance, he notes:

“I’ve discovered that those gentle natives, the Polynesians, know how to have fun in simple, unaffected ways. …They are not immoral but, according to our standards, they just ain’t got any.” He states that Cuba’s economy was destroyed by ending slavery.

Some Colorado establishments understand the Tiki dilemma and try to address the giant Easter Island moai in the room.

Boulder’s Jungle makes a point of stating on its website: “We don’t appropriate,” and the business avoids the more inappropriate cultural references.

Swaylo’s Tiki Restaurant and Bar in Longmont donates 10% of its profits toward cleaning up the Great Pacific Garbage Patch.

Shrunken Head Tiki in Colorado Springs notes on its website,”We have the utmost respect for the origin of Tiki and our name itself intends to pay homage to our genuine esteem and true admiration.”

You can sample authentic Hawaiian and Polynesian fare at several local eateries such as Kealoha’s BBQ (16th Street Mall), fieldTRIP (Denver) and Today Hawaiian BBQ in Thornton. Operated by Shauna Medeiros-Tuilaepa and Cornelius Tuilaepa, No Ke Aloha in Aurora dishes the simple classic dishes ranging from loco moco to coconut shrimp and pulehu steak served with rice and mac salad.

Finally, in researching my 1946 edition of Trader Vic’s Book of Food and Drink, I discovered that it may be worth more than $150, so it did turn out to be an inheritance of sorts. (To try a Trader Vic’s cocktail recipe, turn to Cuisine, Page 29)

“Food is a great literary theme. Food in eternity, food and sex, food and lust. Food is a part of the whole of life. Food is not separate.” —Novelist and critic Jim Harrison