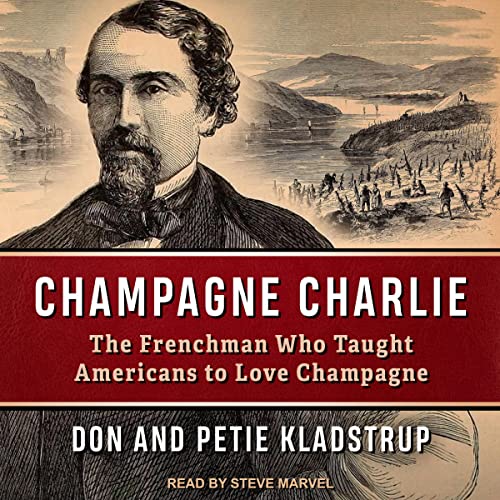 Husband-and-wife writing team Don and Petie Kladstrup have written about wine and Champagne in a few bestselling books, including Wine & War: The French, The Nazis and The Battle for France’s Greatest Treasure (2002); and Champagne: How the World’s Most Glamorous Wine Triumphed Over War and Hard Times (2006). Their most recent work, Champagne Charlie: The Frenchman Who Taught Americans to Love Champagne (2021), details how Charles Heidsieck, the founder of Charles Heidsieck Champagne in France, came to have an inextricable tie to the city of Denver, and how his Champagne business was able to survive thanks to a turn of events that granted him deeds to a sizable portion of land on which the Mile High City now sits.

“Champagne had been in America prior to Charles’ time here, but in the middle of the 19th century it became very fashionable due to his efforts,” explains Petie Kladstrup, who has lived in Paris with her husband since 1978. “Charlie was the only producer to actually go to the States and present his bubbly to Americans in person. It wasn’t an easy job, because Americans were considered to be a bunch of beer-swilling, whiskey-guzzling people unfamiliar with the finer things in life. Champagne became a hit because of him. He was treated like a rockstar during his visits between 1852 and 1860, and newspapers followed him everywhere.”

A larger-than-life figure who ventured to America from France in the mid-19th Century to sell his fizzy product to the wild denizens of the Land of Liberty, Heidsieck realized incredible success in the States, but not before almost losing his life, and his Champagne company, in events surrounding the Civil War.

As the purveyor of bubbly was traveling through the South in 1862 to collect debts he was owed from previous shipments of his popular beverage, he was arrested by the Union as a suspected spy. Heidsieck made the unfortunate mistake of agreeing to transport a sealed diplomatic pouch from the French consul in Mobile, Alabama, to the French consul in New Orleans. The pouch contained sensitive information pertaining to a French textile company that manufactured Confederate uniforms. Bad timing. The Frenchman was imprisoned and served grueling stints in Fort Jackson (in Louisiana) and Fort Pickens in the Florida Panhandle. He was finally released with the help of the Lincoln administration; but by the time he was freed he was broke, physically infirm and the future looked bleak for the once popular peddler of bubbly.

One of Heidsieck’s U.S. import agents, David Bayaud (same name as the Denver avenue), who was in debt to Heidsieck for a considerable amount that he never repaid, had a more honorable brother, Thomas Bayaud, who eventually made good on the family obligation. The brother sent Heidsieck a stack of deeds to land in the growing Mile High City. This good-faith repayment, which translated to about a third of the land in Denver at the time, eventually allowed Heidsieck to sell off the Colorado real estate, recoup enough to pay off his business obligations, and perhaps most importantly, keep his vin mousseux flowing. Among other things, he also received cotton in exchange for monetary payment. During the conflict-fraught time of the War Between the States, cotton and land were suitable trade items.

Heidsieck’s historic journeys to the U.S. were directly responsible for the success of Champagne as the celebratory libation that we know today. His visits to America were legendary, as was his dandified personality, which made him the toast of the towns he visited. His legendary stateside trips inspired his nickname, given to him by the press: Champagne Charlie.

Heidsieck started his company, Champagne Charles Heidsieck, in 1851, a year before his first trip to America. The company is still in business today and is one of Les Grande Marques of Champagne — 24 famous merchant houses in the French province.

And there’s no doubt Heidsieck’s splashy visits to the States made the drink extremely popular.

“When he set off for America, people told him he was nuts,” says Don Kladstrup. “They told him America was far away, unsophisticated, full of Indians, and that he was going to fail. He succeeded beyond his wildest dreams, or the dreams of anyone else. He was out there identifying with his product and as a result, sales soared and the money rolled in.”