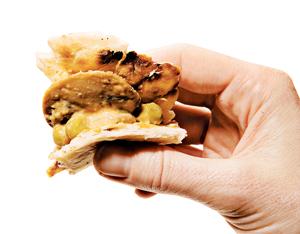 A sandwich is a sandwich. But a naanwich, well, that’s a phenomenon that has popped up all over the nation as Americans warmly embrace the South Asian clay-oven bread known as naan.

No longer restricted to Indian restaurants or ethnic grocery stores, the airy and supple flatbread is now proffered in the bread aisles of Whole Foods, Trader Joe’s and even many large grocery chains. Meanwhile, Sabri Naanwich shops serving their trademarked dish have risen all over Canada, and chefs in this country offer several non-trademarked versions of the inevitably named sandwich.

Still, the mainstreaming of naan (which rhymes with John) comes as a mixed blessing to Indian culinary authority, teacher and cookbook author Julie Sahni.

On one hand, “it shows the growing familiarity with Indian culture,” she said. But on the other hand, some packaged versions in the bread aisle “can be just horrible dry, bready and so expensive, nothing at all what naan was ever supposed to be like.”

Indeed, this clay-oven bread, which came to India from Central Asia with the 16th-century Mogul emperor Babur, is supposed to puff up like a crisp, tender pastry quilt and emerge from the oven in less than a minute. Pulled apart and devoured hot, naan should taste “like a dream and need nothing else on it,” Sahni said.

But can that dream be re-created at home?

The answers are yes and no. Sahni and her fellow Indian cooking expert Monica Bhide agreed that commercial versions can cook up nicely. “I especially love the Pillsbury frozen naan,” Bhide said.

Scratch versions, however, can be a bit more complicated. Even though they are fairly easy to assemble, some require long rising times, and no one seems to agree on how best to duplicate the intense radiant heat of a tandoor, the traditional clay oven. Various suggestions include using a pizza stone, bricks in the oven, a hot toaster oven, a cast-iron pan, a barbecue grill or a broiler.

We tested a few recipes and cooking methods and found that the fastest and tastiest recipe came from Madhur Jaffrey’s Indian Cooking. It includes a combination of yogurt, yeast, egg and baking powder to create a fluffy, elastic dough that rose in about an hour.

“You can’t compare it to bread from a tandoor,” said Jaffrey, who shares her recipes and food memories in her recent memoir Climbing Mango Trees. “But I worked hard to develop a recipe to make a dough that is smooth and silky to make the bread stretchy and chewy, as it should be.”

NAAN
Makes: 6 large breads / Preparation time: 25 minutes / Rise time: 1 hour / Cook time: 4 minutes
Adapted from Madhur Jaffrey’s Indian Cooking. If you would like a darker bread, place 3 to 4 inches from a heated broiler for 30 seconds after the bread is baked.
2/3 cups hot milk
2 teaspoons each: extra-fine sugar, active dry yeast
3-3/4 cup flour
1 teaspoon each: salt, baking powder
2 tablespoons vegetable oil plus more for bowl
2/3 cup plain yogurt, lightly beaten
1 large egg
Melted butter, optional
Put milk in a bowl. Add 1 teaspoon of the sugar and all of the yeast. Stir to mix. Set aside until the yeast has dissolved and the mixture is frothy, 15-20 minutes.

Sift the flour, salt and baking powder into a large bowl. Add the remaining 1 teaspoon of sugar, the yeast mixture, 2 tablespoons of the vegetable oil, the yogurt and the egg. Mix; form into a ball of dough.

Knead dough on a clean work surface until smooth and satiny, about 10 minutes. Form into a ball. Pour about 1/4 teaspoon of oil into a large bowl; roll the dough in it. Cover the bowl with a piece of plastic wrap; set aside in a warm, draft-free place until the dough has doubled in bulk, 1 hour.

Heat oven to 500 degrees. Heat a heavy baking tray (or an upside down cast iron skillet) in the oven. Punch down the dough; knead it again. Divide into six balls. Keep five covered while you work with the sixth. Roll ball into a tear-shaped naan about 10 inches long and 5 inches wide.

Remove the hot baking tray from the oven; slap naan onto it. Put it immediately into the oven for 4 minutes. It should puff up. Keep the naan warm by wrapping it in a clean kitchen towel; repeat with remaining dough. Serve hot after brushing with melted butter, if you like.