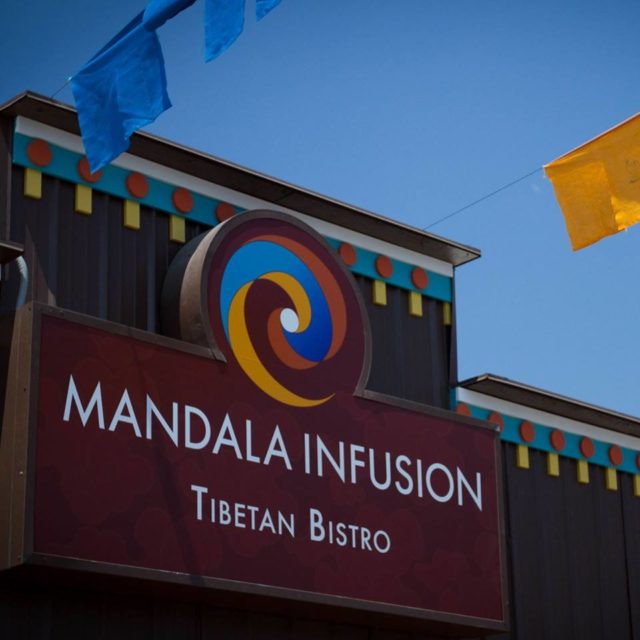 A string of prayer flags flutter over Mandala Infusion. Even in the oppressive heat, a sense of peace is palpable — seems the prayer flags are doing their job.

It translates literally to “hail to the jewel in the lotus.”

Different religious leaders have explained the mantra in various ways, but the Dalai Lama explains it like this:

“[T]he six syllables, om mani padme hum, mean that in dependence on the practice of a path which is an indivisible union of method and wisdom, you can transform your impure body, speech and mind into the pure exalted body, speech, and mind of a Buddha… ”

In essence, the mantra embodies the teachings of the Buddhist practice; in chanting it, practitioners seek compassion and, eventually, enlightenment.

If Mandala Infusion sounds like a temple, that’s because it is — in a way. Owner and Tibetan-native Takla Armour created the restaurant as a community gathering place, an environment for people to share experiences, good food and culture.

Takla moved to Portland, Oregon, from Tibet in 2009, but a trip to Boulder reminded him so much of home that he moved here in 2010.

“When I came to America I found the freedom to express and pursue my dream, but I did not know what it was for awhile,” Armour says. “I always dreamed of having a Tibetan community place, and I kept thinking of having a temple or a place where people could meditate or have teaching retreats. I kept polishing my idea into a restaurant where we can bring food and people together.”

In 2015, Mandala Infusion was born, but like any labor of love, it took perseverance and hard work.

Armour spent 13 months renovating the space on Broadway in North Boulder where Mandala now sits, bringing much of the building up to code for a restaurant. It took hours, days and weeks of work to search for funding to purchase the pieces that make Mandala such a welcoming space, like the three Sangha tables that sit in the main dining area. These low-to-the-ground tables invite patrons to remove their shoes and enjoy a meal as many Tibetan families do each day.

Mandala offers a smattering of classic Tibetan delights, such as soft and savory vegetable and lamb momos. A humble suggestion is to explore the menu by ordering several of the small plates: tender short ribs with housemade kimchi that will clear the sinuses; sliders known as tingbuns made with your choice of pork belly, short ribs or tofu; traditional falafel and tahini, homemade bone broth and a stir fry dish known as shapta made with sirloin. Larger dishes include chicken or vegan curry (with just the right amount of heat to stimulate the senses, not render them useless); marinated chicken breast with roasted golden beets, bok choy and roasted potatoes; and veggie thupka, an Asian noodle dish that is famously variant among Tibetan people, with the magical healing powers often attributed to noodle soups.

To Armour, who holds degrees in nutrition and exercise science, “Food is medicine.”

“In a way, nourishing people through food is healing,” he says. “It enhances culture and well-being.”

At the end of the day, Armour sees Mandala as a temple, as a place of reverence for culture.

“This place is to be shared,” he says. “Anything that people can use this space for, we are of service.”