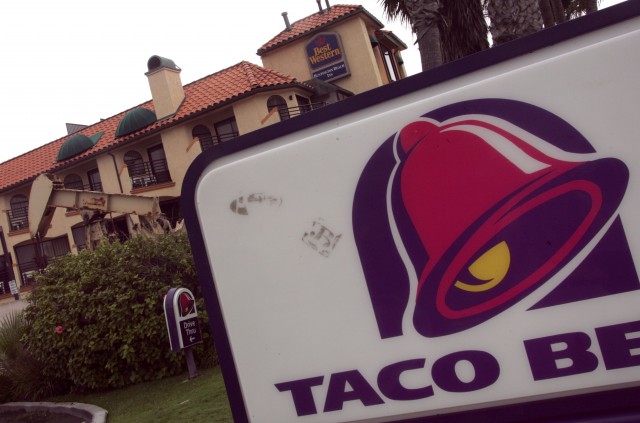 For many foodies and their lefty amigos, belongs in the pantheon of all-time anti-Mexican conspiracies — a notch below but more onerous than the swine flu.

These custodians of cuisine and culture rail against
the fast-food behemoth, bemoan how it mongrelizes one of the world’s
great food traditions with its chalupas and enchiritos, its Volcano
Menu and cheese roll-ups. The chain’s ubiquity makes it just another
foot soldier in corporate America’s drive toward nationwide blandness,
they’ll argue. And how insulting was that darn Chihuahua campaign from
a couple of years ago? “Yo quiero ?” Muy racist!

Full disclosure: I’m one of those whiners. Ever tried one of their burritos? Blech. But with the recent death of founder, ,
it’s time to praise the multibillion-dollar powerhouse. It deserves a
spot in Mexican American lore, in the gallery honoring those brave
pioneers who helped us join the melting pot — below but higher than .

When Bell sold his first crunchy taco in 1951,
Americans outside the Southwest largely were unfamiliar with Mexican
society beyond
banditos and the spicy senoritas of song. It was the years before the
Great Brown Migration, and without a widespread population to introduce
Mexican dishes to the general public, the nationwide reputation of
Mexican food languished in the realm of slurs — “pepper belly,” “taco
bender” and the ever-dangerous “Montezuma’s revenge.”

But Bell — a white man operating a burger stand in
barrio — saw an opportunity. “I figured if Mexican food (sold in a
fast-food environment) was successful, potential competitors would
write it off to my location and assume the idea wouldn’t sell anywhere
else,” Bell said in his 1999 biography, “Taco Titan: The Glen Bell
Story.” He began streamlining the taco-making process, modified Mexican
foodstuffs for mainstream acceptance and opened his first in , in the early 1960s, franchising nationwide soon after. “I didn’t invent the taco,” he remarked, “but I believe I improved it.”

That claim is still debatable, but what’s certain is
that Bell’s mass-produced version of Mexican food — owing more to the
palate of suburban than the Empire of the Sun — caught on across .
It was a more innocent time, one in which communities welcomed
encroaching Mexican culture not with protests and vile slurs but with
an order for three hard-shell tacos, easy on the sour cream.

Competitors quickly popped up and spread “Mexican”
food to all corners of the republic long before actual Mexicans
arrived. Some kept versions of original mascot,
the archetypal peon sleeping under a cactus; others modified the food
further to match local tastes (oh, how I’d love to see gourmand purists
react to , a chain with hundreds of outposts in
the upper Midwest whose signature breakfast burrito contains crunchy
Tater Tots). It’s now a multibillion-dollar industry, with firmly on top.

The company’s introduction of a culinary scaffold on
which Americans learned to crave Mexican food proved momentous to
American tastes. Without , salsa wouldn’t have become as big a seller as ketchup and mustard. No , then no Doritos empire or Super Bowl Sunday rush for guacamole. Without ,
Mexican food wouldn’t have entered our gustatory vernacular alongside
pizza, the hot dog, pita wraps and other vestiges of ethnic America.

Far from warping traditional recipes, the success of -style Mexican eats sparked a backlash led in the 1970s by author and culinary expert , and carried to the present day by and other celebrity chefs to popularize “authentic” Mexican dishes so
amateur cooks could ditch the taco kit and experience the real deal.
And the continual influx of Mexican immigrants into this country
ensures that “real” Mexican fare won’t soon disappear.

More important, and its spawn
became a gateway for Americans to accept Mexicans. It hasn’t been an
easy ride, of course, but one smoothed by an endless stream of refried
beans and nacho cheese. If you can sit down and enjoy the cuisine of
newcomers, then surely you can start thinking of them as fellow
citizens, right? And with recent push into
international markets, it’s making as bold a statement as any in the
immigration wars, one that’s downright revolutionary: Mexican food can
represent U.S. culture with nary a second thought.

I ate at the other night for the first time in years in honor of ,
just to see if my bad memories of the chain were still justified. They
were. My burrito contained bland pinto beans, cheese that tasted like
chalk, all within a clammy flour tortilla. But in front of me in the
drive-through line were whites, Asians, even Mexicans, all trying to
grab a slice — scratch that, a taco — of America.

But here’s hoping they doused their grub with Tapatio instead of requesting extra packets of Border Sauce Fire — it’s still , after all.