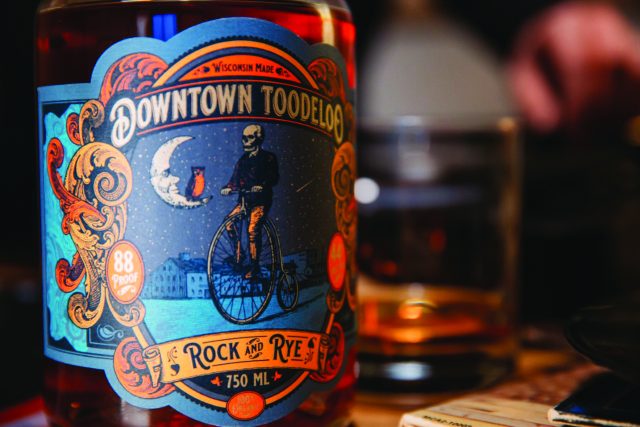 Among the things that drew Chad Staehly to Colorado in the early ’90s was good beer. Then a student at Colorado State University in Fort Collins, Staehly appreciated the flavorful craft suds of New Belgium and Odell, as well as other area brewers. Staehly also had a passion for roots rock, which eventually led him to team up with Leftover Salmon frontman Vince Herman in the Boulder-launched jam band Great American Taxi.

Fast forward a few decades and Staehly, now a family man, finds himself co-owner of a craft spirits distillery, La Crosse Distilling Company, in his home state of Wisconsin.

The whole endeavor emerged from the ashes of a music venue concept Staehly was developing with his business partner, Nick Weber.

“Nick had also started to conceptualize a distillery [in La Crosse], which is a booming college location. La Crosse reminds me of the Fort Collins I lived in during the first part of the ’90s, or maybe Boulder back in the ’80s,” Staehly says.“We were getting ready to draw up plans for a music venue, which had been a lifelong dream of mine, and were at the point where we were going to have to start spending money, when I decided to put the music idea on hold and go with the distillery. We just thought it was a home run. I’ve been involved with music most of my life, and I knew that there was a lot more money in liquor.”

Staehly, who lived in Colorado for 25 years, continues to play music with The High Hawks, Todd Snider and Great American Taxi. He also manages artists including Snider, The Band of Heathens, Chicago Farmer and Reed Foehl, in addition to working with the indie record label LoHi Records.

Sitting on the banks of the Mississippi River in a cozy renovated industrial building that includes a few steampunk-looking copper and metal stills, and powered by geo-thermal energy, La Crosse Distilling offers an inviting space as well as a variety of pleasing craft hooch, including gin, vodka, bourbon and specialty whiskey, such as their Downtown Toodeloo, a “rock and rye” blend that recalls a bygone American era.

“We started making our Fieldnotes vodka and gin first,” explains Staehly. “Then we moved to whiskey, but whiskeys and bourbons lay around for years in barrels before they’re ready, so there’s more upfront cost there. A lot of craft distillers start with clear spirits because you can have a batch of gin or vodka done in about 10 days, versus four years to get a bourbon ready. Our Downtown Toodeloo is a type of rye whiskey that’s a ‘rock and rye,’ which is a flavored rye whiskey. It harkens back to the end of the 19th century and early 20th century, when doctors and pharmacists would prescribe whiskey for just about everything that was ailing you. But not everyone has the constitution to pound down a shot or two of whiskey for their medicine, so they’d add rock candy to the rye whiskey to sweeten it up.”

Staehly says the popularity of rock and rye whiskey led to some distilleries producing it as a spirit type.

“It was also a way for early distillers in the U.S. to compete in a different way with imported whiskeys from places such as Scotland and Ireland,” he says. “It kind of disappeared for most of the 20th century. We were intrigued by it, and we saw some opportunity with us being Deadheads, with the whole ‘half a cup of rock and rye’ reference from the song ‘Mississippi Half Step Uptown Toodeloo.’ We thought that was a lot of fun and we played into it with the branding and the artwork. Our distillery is in downtown [La Crosse] on the banks of the Mississippi, so we called it Downtown Toodeloo. It goes down really easily, but it’s 88 proof whiskey so it packs a punch.”

In addition to relying on green energy for their facility, Staehly and company source their grains (including corn, rye and malted barley) from organic farms in their area.

“We like to use local family farms that are really doing it right and taking care of the land, which is really important to us,” he says. “Then we send all our spent grains back to the farms, where they get used for livestock feed, composting and fertilizer.

Located in the north country, La Crosse Distilling makes use of the region’s plentiful white oak trees, which make for excellent staves that are used when building the barrels in which the whiskey is aged.

“There’s a famous stave maker near us who harvests white oak sustainably,” Staehly says. “The cold, hard winters up here result in tight rings on the trees. Those tight rings make great wood for bourbon barrels.”

La Crosse Distilling is set to release its first bourbon, in those local white oak barrels, in March 2023.

“For a long time people thought you could only make whiskey in the moderate climates of Tennessee and Kentucky. But what has been found is that we can get extra layers of flavor profile in whiskeys and bourbon because of the intense climate swings in the upper Midwest.”

La Crosse spirits are distributed in Colorado and are available at stores including Hazel’s Beverage World. Check their website for local availability.