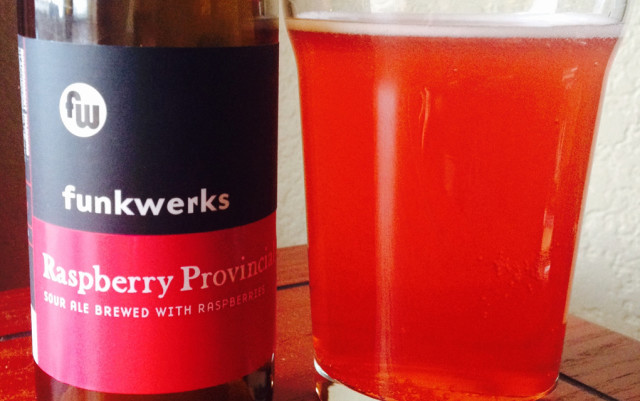 Forget one-day blizzards that drop over a foot of snow and knock out power across Boulder County. If we drink summer beers, it will feel like summer again. If we drink it, summer will come.

It was out of that optimism that I picked up a bottle of funkwerks’ Raspberry Provincial sour ale this week. You may have noticed funkwerks’ taps and bottles popping up in local liquor stores and bars over the past few months. Coincidentally, the Fort Collins craft brewery is currently expanding its production facility after increasing production by 80 percent from 2014 to 2015. So you better hop on board now.

The Raspberry Provincial is a product of the brewery’s innovation. In 2013, the brewery took a test batch of its base sour ale, the Provincial, which hadn’t hit gravity and added a bunch of raspberries to the brew. Because they liked it so much, they decided to make it a regular thing. The raspberry is now the third in the line of Provincials for funkwerks, with a seasonal apricot sour ale and a dry-hopped sour ale also under the umbrella.

Technically speaking, the Raspberry Provincial is a Belgian-style fruit ale and won a gold medal at the 2014 Great American Beer Festival in that category. It’s juicy, light and tart, and clocks in at 4.2 percent ABV. It’s sold in single 750-mL bottles and in four packs, and your supposed to drink it at around 50 degrees in a tulip glass. I drank it probably a little colder in a pint glass, and the world didn’t end.

In fact, the world got a little better. I’m partial to raspberry in beer, more so than any other fruit, and the sour ale is a perfect companion to tart raspberry.

It pours smooth with light carbonation. The color is pinkish-orange, and it really does feel like you’re about to drink juice. The aroma of the beer is fruity, sour and tart with definite raspberry scent and a little bit of lemon zest. You certainly don’t need to, and shouldn’t, add fruit to this thing, because it’s already abundant.

Tasting it, the beer is very light, and the sourness is exceptionally refined. Sour and tart raspberry dominates the palate without puckering lips or creating a horrid Welch’s it-makes-your-lips-smack situation. You’ll drink the whole glass in like five minutes whether you want to or not, because it’s just so easy to drink.

If you are looking to be challenged by a beer, don’t get the Raspberry Provincial. However, if you’re in the market for something to drink a few of on the patio to get right on a sunny afternoon, this is the brew for you. You can pick it up in stores or visit the taproom in Fort Collins where they’re currently pouring the Raspberry Provincial, along with a number of saisons, sours, barrel-aged beers and more.