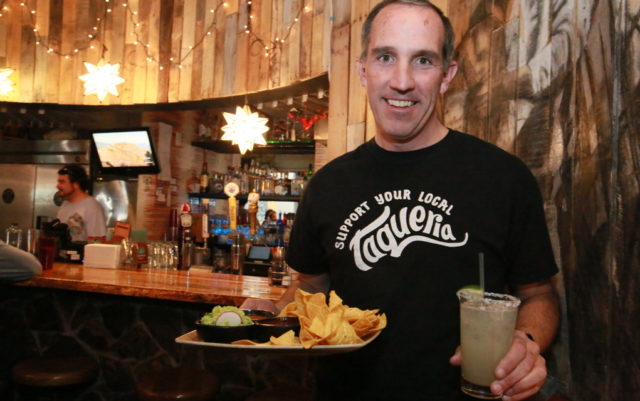 There came a time when Peter Waters had to intervene in his own life. He’d been working a job selling data plans for a decade, and was reaching a dead-end that would make Arthur Miller blush.

“I tell people it was a great job for keeping the lights on,” Waters says. “I kind of woke up one day and decided I’d rather live in the dark than go to work another day doing that kind of work on a daily basis.”

Sales was lucrative, but brainless. He worked on commission gained via signing long-term contracts with clients; when a three-year deal ended, he made one phone call, maybe two, and thus guaranteed some income for another three years. “It was greater money for less work over time,” he says. He could work remotely, taking vacations whenever and wherever he pleased so long as he had internet access. From the outside it looked more like a cushy cul-de-sac than a dead-end.

“[The perks] kept me around longer than they should’ve, but the insanity of working a job to earn enough money to go on vacation so you don’t have to work is pretty stupid,” Waters says. He laughs, then adds, “I didn’t think it was stupid when I was doing it.”

But eventually, enough was enough. He derailed his sales career, “milking it for all it was worth,” before quitting. He then called up some friends who were starting a taqueria in downtown Boulder and asked if they needed help. They stuck him behind the bar and siphoned some of his marketing knowledge to boot.

“The plan was to do it for only a few months and for me to get back on track with my corporate career,” Waters says. “I was asked in [to T/aco] and in a couple hours just felt this is what I should be doing, which is unique. At the time, I was 36 years old, and not a lot of people arrive in the restaurant world at that age.”

That’s true. Folks who work in the restaurant industry tend to be young because of its relatively low barrier to entry. Lots of people hop in and out until they “get on track,” so to speak, but for the few who have hospitality in their nature, stepping behind a bar or behind a host stand can feel like an epiphany.

Hospitality had long been a part of Waters’ personality — it’s probably what made him an effective salesman of, what was it, data plans? He says he was “social chair in a fraternity and it never really stopped.” He spent Sunday mornings at brunch at Brasserie Ten Ten and would be so apt at socializing that he’d invite whomever he met back to his house a few blocks away for Champagne on the patio.

But it wasn’t just that Waters found his calling when he walked through the doors at T/aco, it was that he realized what he’d missed over his 10 years in corporate America.

“My greatest issue with my previous life was that I wasn’t learning anything new,” Waters says. “It was this kind of Groundhog Day of corporate life and that was not the case when we opened up here. Six years later, I’m kind of starting to feel like I just have a grasp on what we’re doing.”

You can imagine how steep the learning curve was for the restaurant newbie when the partners at T/aco made him part owner within his first year and essentially gave him the reigns to the restaurant. There was the business side — replacing equipment, marketing and setting prices — and then there was the craft of making tacos.

The kitchen at T/aco is run by an all-female, all-first-generation-Mexican crew. Though local chef and taco aficionado Matt Collier initially developed many of the recipes, the kitchen staff now makes everything from tortillas to meat dishes to salsa from scratch. Waters says watching the women work has been like an internship at his own business, and that it’s their intention while cooking, more than their technique, that has the biggest impact in the restaurant.

“People follow these exact recipes and it’s the attitude people bring to the preparation that changes the flavor. That carries over into the front of house, which I wasn’t expecting,” Waters says.

Happiness in the kitchen is passed onto the waitstaff, which is passed on to the customer, Waters says. And if you’ve eaten at T/aco, you know that’s not a sales pitch; it’s cozy and the staff is almost overwhelmingly friendly. And, of course, the tacos — from pork belly to duck to al pastor varieties — are delicious.

The goal is to create a community through tacos, Waters says. T/aco regularly holds fundraisers, and 100 percent of the money spent on gift cards in December is given to the kitchen staff.

That sense of community extends to the Boulder County restaurant scene, too. For instance, T/aco acquired a wet mill so they could make their own masa out of dehydrated corn kernels. When the mill came in, Esmerelda, a senior cook in the kitchen, said her mom had the same model in her village in Mexico, and that she’d make masa for the whole community, which she traded for fruit, vegetables and wares with neighbors.

When Esmerelda shared this story with Waters, he says, “a light bulb went off and I said, ‘Hey, what if we did what Esmerelda’s family does in Mexico in Boulder?’”

Now, they do. Dishes at Arcana and River and Woods now feature T/aco masa, and Waters says he’s gotten unique food products in return that show up on T/aco’s menu. Like the time OAK at fourteenth closed for renovations and Chef Steve Redzikowski came over with a cooler of prepared goods to sell at T/aco.

Given T/aco’s success, Waters hopes his 2,000 or so patrons that walk through its doors every week would follow him in a new venture, featuring, say, pizza or burgers.  Whatever it is (or, if it ever is), Waters is uniquely suited to take on the great unknown.

“When we first started, everyone was so intrigued by who I was and what I was doing,” he says. “I used to tell them when it feels like work I’m going to quit. … The reality is the day it felt like work, I realized there’s no other work I wanted to do.”

People come over with this look in their eyes and say, ‘I’ve got one question.’ and I’m like, ‘T/aco,’” Waters says. “They have this very peculiar look, and they look at you like, ‘I’ve got $10 riding on this with my friend.’”

Normally when a word has a unique pronunciation, we’ll provide you with a brief phonetic key. T/aco, however, requires etymology.

The group that started T/aco also started H-burger in Boulder and Denver. Those restaurants sold, wait for it… hamburgers.

“We kind of ran out of our creative juices when we were getting ready to open the place,” Waters says. “Honestly we were talking about how we could shorten taco like we did hamburger, [and then] somebody asked us to fill out a very important piece of paper, so we just kind of went with it.”

Waters says they’ve heard it pronounced “taco,” “t-aco,” “t-slash-aco” and more. It all works, he says.