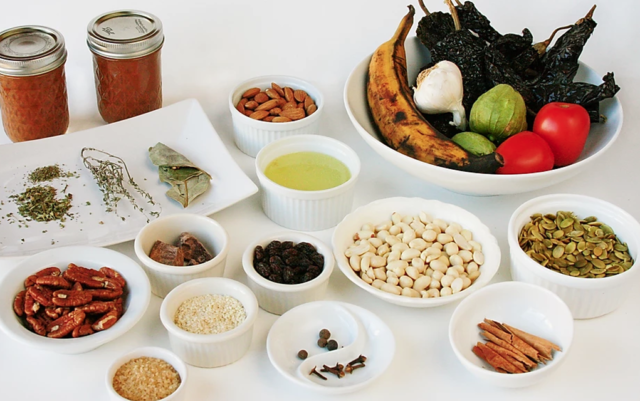 “I immigrated from Mexico when I was 13, so food is very important to me,” Pacheco-Borden says. “And every time I would go to the farmer’s market here in Boulder, I would be like, ‘Oh, I want to be there, you know?’ But it was crazy because, why — I’m not a farmer. But then I said, they could use a very good salsa, like what they serve in Mexico. And then I thought they didn’t have molés either.”

Molé is much more than we’ve been conditioned to think in the U.S.  “Molé” means “sauce” in the Nahuatl language and encompasses everything from that familiar, thick, brown, chocolatey stuff (molé negro from Oaxaca) to vibrant red chile (Sonora) to guacamole. Though rooted in centuries of culinary history, molé as we know it today is a product of an imperialized world, Pacheco-Borden says.

“Molé is a fusion cuisine,” she says. “It could not exist as it is now without the Spaniards invading because they brought the spices.”

Remembering the flavors of jarred molé from around Mexico and the red molé of her native Sonora, Pacheco-Borden tried to recreate recipes in her kitchen, with an eye toward bringing them, eventually, to the Boulder Farmers Market. But she couldn’t get the flavors quite right, so she went to molé mecca: Oaxaca.

There, she rented an Airbnb and took classes on making a variety of traditional molés. But there was one that inspired her most.

“The one that touched my heart was the molé negro, because it was the most complex, and I like challenges,” she says.

Famous for its ingredient list, with some varieties using more than 30 items, molé negro is notoriously time-consuming. Each ingredient requires tedious preparation, and everything, from the spices to the herbs to the vegetables, are best when ground, chopped and/or roasted fresh. So after returning to Colorado, Pacheco-Borden developed a recipe and honed the techniques she learned on her pilgrimage.

When the proof was in the molé, she brought a few varieties to the Farmers Market. As it turned out, the venue was the best, and maybe only, outlet for Pacheco-Borden’s molé.

“I like to cook from scratch,” Pacheco-Borden says. “The system right now is not designed for that. Like if you want to get into a grocery store, you have to delegate what you do to a co-packer, and then those folks do things simple so that they can be automated. I mean, they’re not roasting tomatoes and making sure they’re all peeled.”

That attention to detail has won her molés and salsas many loyal fans and growing regional acclaim. As a result of her work, Pacheco-Borden was recently elected as a Boulder County Farmers Markets board member. She says the position enables her to ensure people from far and wide, with ideas like bringing molé to the masses, get their chances at success.

“I feel like we need to be represented on the board because there could be other vendors like me that I would like to be part of decisions in the future for the Boulder market,” she says.

‘It’s not so complicated’

To attempt your own version of Pacheco-Borden’s 30-ingredient molé negro, divide the ingredients into food groups: nuts and seeds; spices and herbs; vegetables; peppers; and other.

For nuts and seeds, Pacheco-Borden uses pecans, almonds, sesame seeds and pumpkin seeds and roasts them to release their oils. They provide thickness when macerated, which allows Pacheco-Borden to forgo the traditional addition of bread.

For the spices and herbs, buy whole spices and grind them fresh into your molé mixture. Restraint is advised on spices like cumin, cloves and anise — “Cumin is like a noisy aunt,” Pacheco-Borden says. “A little goes a long way.” Aromatic herbs like oregano, thyme and marjoram provide fragrance.

Vegetables like tomatoes, tomatillos onions and garlic are refined first — they must be caramelized, which is typically done on a flat, dry-roasting comal.

For peppers, Pacheco-Borden uses three dried and then rehydrated varieties: ancho, pasilla negro and the chilhuacle, which is native to Oaxaca and tricky to find in the U.S. It helps gives molé negro a chocolate flavor.

As does chocolate, of course, which Pacheco-Borden roasts and grinds from cacao beans herself. To balance the bitterness, raisins are added for sweetness.

Thin your molé with water or chicken broth.

Now, you go figure out the other dozen ingredients. Or, just get Pacheco-Borden’s version at the Farmers Market.