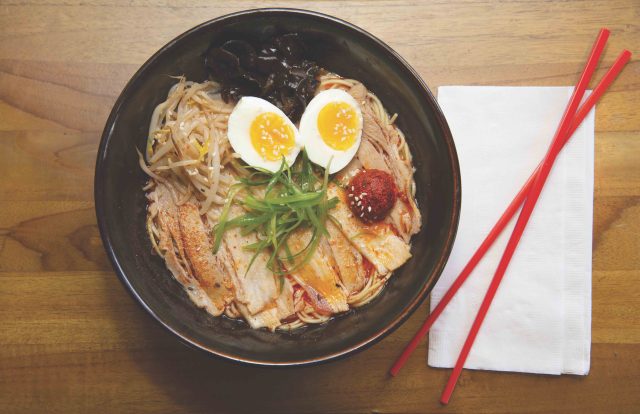 Edwin Zoe was already a local legend. But now he’s also a James Beard semifinalist, having been nominated this year for Outstanding Restaurateur. Anyone who has dined at either of his two Boulder restaurants will assure you the honor was a long time coming. Zoe first opened his original Pearl Street restaurant Zoe Ma Ma in 2010. The menu is largely full of pan-Asian comfort snacks made by his mother Anna. “People just call her mama,” Zoe says.

Zoe was born in Taiwan before moving to the United States as a kid. He and his family bounced around the East Coast before landing in Missouri. He first moved to Boulder to attend the University of Colorado to get a degree in international business and finance. It would be some time before the thought of opening a restaurant crossed his mind.

But Zoe has always been passionate about food. “Even before I knew how to read, I insisted on ordering for myself,” he says. “Even now, when I travel, it centers around food.”

Zoe Ma Ma has always been about highlighting his mother’s cooking and the bond the two share through food. It’s magnificently cozy cuisine, with many of the dishes being items Zoe has eaten since childhood. His new concept, Dragonfly Noodle, is his own thing. “Mama is not the creative force behind Dragonfly’s food. Though she still tells me what to do,” he says with a laugh.

At Dragonfly, which sits next door to Zoe Ma Ma in the same space that previously held his more upscale concept Chimera Ramen, Zoe curates the menu. “It started with ramen and pho then expanded into yaki udon, Singapore noodle and lobster bao,” Zoe says. Food is served in the same hybrid fast-casual style as Zoe Ma Ma where guests place their initial order at the counter and then can enjoy the remainder of the meal with all the joys of a regular seated experience. Edwin says the format was inspired by the many ramen shops he visited in Tokyo.

Dragonfly Noodle is an equally brilliant ode as Zoe Ma Ma, though this time Zoe is celebrating his own endless intrigue with all things noodle. “I think about all kinds of food, but if I think about the comfort food I can always eat, it’s noodle,” he says. So when the pandemic hit, Zoe began shifting his more sit-down-oriented Chimera Ramen into something viable for take-out.

“We had to pivot, so we started working on my core passion, which is noodle,” he says. As time went on, it was clear that he was working on a new project altogether: “Let’s just clear the table. Let’s just do a new brand.”

Dragonfly opened its doors in May 2022, with a Denver location being added to the roster in July.

Each morning, the ramen noodles are made fresh right in the front window from a medium-hard wheat flour. “We’re committed to making craft noodles,” says Zoe. Ramen is the star of the show, with each bowl drawing from Zoe’s studied palette. “I went to five different ramen shops for one lunch,” he says of his last visit to Japan.

While much of the menu is to-go friendly, Dragonfly still has one of the most serene interiors in town. The ceiling is ornamented with fixtures Zoe says were inspired by waves and water, and the restaurant’s compact 60-seat room always seems to support a gentle buzz. The smell of the broth, which is cooked endlessly in massive pots, can be smelled from down the street.

The menu is centered around five ramens. There’s a black tonkatsu, its robust funk fueled by plenty of black garlic oil, fried shallot, spicy sprouts, cloud ear mushrooms and scallions. It’s topped with a healthy portion of cherrywood smoked pork belly and maintains a more powerful and nuanced flavor than some of the soups found in the more trendy and westernized shops. There are three miso variations and a delightful butter lobster option for anyone feeling a little spendy. The smoked brisket pho is divine and there’s a mandarin chicken salad for anyone eating on the lighter side.

Dragonfly Noodle still runs off the same passion instilled by his mother that built Zoe Ma Ma into such a beloved locale. But with his clear dedication to the craft, it’s fun to see Zoe behind the wheel.