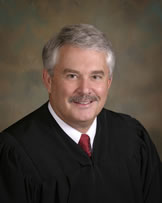 Judges
at all levels must uphold the Constitution. That’s why Boulder voters
must remove Judge John F. Stavely from his position.

The Daily Camera published
an assault suspect’s mugshot on its website in July 2005. They’d
gotten the photo, which is public record, from the Boulder Police
Department.

When a Camera photographer
showed up later that day at Stavely’s courtroom for a hearing, though,
the judge turned him away — and handed him a handwritten order
requiring the paper to take the suspect’s photo off their website.

That’s
the part where your eyebrows shoot up, and you start to memorize “No
on Stavely.” The whole First Amendment concept of not abridging the
right to a free press seems to have escaped him. A judge can declare a
trial closed to the press in certain situations, but trying to control a
newspaper’s website is way beyond a judge’s control.

The
Colorado Office of Judicial Performance Evaluation compliments
Stavely’s efficiency and calls him fair, and Boulder County District
Attorney Stan Garnett says Stavely “is one of the best county court
trial judges I have ever seen.”

So are we overreacting? Are we making too much of Stavely’s one misstep when he’s got all these other qualities?

No
way. It won’t be hard to find another judge who’s efficient and fair
and doesn’t treat First Amendment rights like they’re mere suggestions.