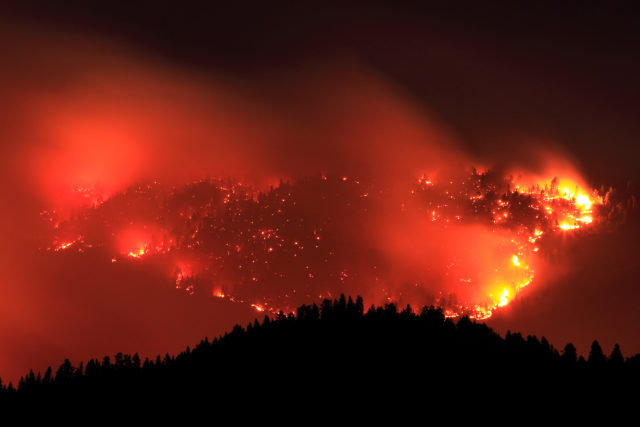 In 2010, the Fourmile Canyon fire raged through Boulder County, leaving more than 160 destroyed homes and almost 6,200 charred acres in its wake. At the time, it was the nation’s highest-priority fire and a threat to Boulder County residents who lived in its path.

One such resident was nature photographer and Nederland resident David Bahr. When Bahr heard reports about the blaze, he knew his house would be in danger.

“So I went down to see what was going on at an overlook on Magnolia. I took my camera, and I started photographing,” he says. “That took my attention off the fear. By focusing on the art, I didn’t focus on the terror.”

He calls the process healing, giving him some semblance of control during a seemingly uncontrollable situation. Bahr was struck by the paradox of fire: how an element can be so destructive yet alluring.

“I realized there is a story here to tell,” he says. “There’s something very contradicting, simultaneously beautiful and terrifying.”

It was Fourmile that inspired Bahr to continue the project, leading to his exhibit One End of the Forest, showing through June 17 at the Dairy Arts Center. The show features several Boulder County fires from the past few years, including the Cold Springs fire and the Sunshine Canyon fire.

Now a full-time photographer, Bahr is a retired climate scientist, previously working as a water resource specialist with a focus in glaciers. Early in his career, he spent time as a firefighter in New Mexico.

Considering his background, it’s no surprise that Bahr is interested in the environmental impact of fires. With global temperature’s rising, Bahr predicts there will only be more in the future.

“Every degree in temperature increase is about a 4 percent drying, meaning 4 percent less water in the Colorado River Basin,” Bahr says. “When we predict an increase of 10 degrees by the year 2100, that means we’re talking 40 percent reduction in water flow, and you can’t have 40 percent less water without a lot more forest fires. The vegetation is going to dry out, you’re already seeing that.

“There’s also a very much increased possibility of mega-droughts that last 50-plus years,” he continues. “The climate model shows about 80 percent chance of that happening by the end of the century.”

In the seven years he’s been photographing fires, Bahr has begun to doubt the efficacy of certain forestry practices like removing trees by clear-cutting or patch-cutting, which Bahr says is not helpful to prevent fire, especially wind-driven events. He questions logging practices as a solution for mitigation, seeing little to no evidence to support the claim.

At the same time, he’s developed a new appreciation for fires’ importance in maintaining a healthy ecosystem. Fire suppression is part of the problem, he says, and controlled burns help to clear debris that fuel wildfires.

“The forest really renews. It gets choked with too many small bushes and gets too dense. It needs the fires to help clear out,” Bahr says. “[Fires] help control pests, like pine beetles. And certain pine cones won’t even open properly unless they’re exposed to high heat.”

Bahr also became enthralled by the aesthetically pleasing aspects of the flames.

“What makes it artistic is that this is very much a part of nature, and as someone who’s a nature photographer, it’s just an integral part of the landscape,” he says. “There is some beauty in it.”

As we expand communities into open space, we are at risk of becoming victims to the elements. But with One End of the Forest, Bahr wants to explore the duality between development and the natural world.

“Who doesn’t love a picture of a volcano? It’s beautiful, but the people in Hawaii are not all happy about [volcanoes] right now. But it is that power of nature,” he says. “I’m trying to find that confusing, conflicting middle ground between art and disaster.”

As when his own house was in danger, Bahr’s photography has helped him look at the abstract part of fire without his initial gut reaction. He recognizes how his work can stir emotions in viewers, but hopes the photos can give a similar sense of relief they gave him.

“Even in the worst, there’s some of the best,” Bahr says. “It’s a matter of taking that control by seeing the flip side of what fire does, the ecological side, the necessity, the beauty in the flames.”

On the Bill: One End of the Forest, by David Bahr. Dairy Arts Center, 2590 Walnut St., Boulder, www.denvercenter.org, through June 17.