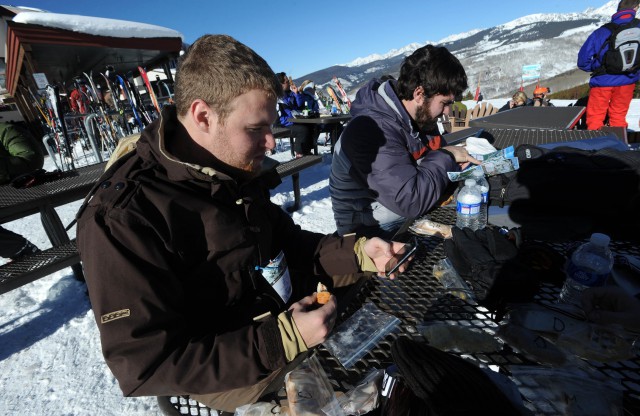 Jon Brelig has been at a ski resort on a socalled “powder day,” unable to find the four inches of freshies that supposedly fell in the previous 24 hours.

“I’ve definitely been skiing where I did not believe the reported conditions,” said Brelig, a Fort Collins, Colo., native who lives in San Francisco. “I’ve been probably a little duped by exaggerated reports in the past.”

So he found a way to keep snow reporters honest.

In 2003 Brelig and his brother started the website skireport.com, a clearinghouse of snow reports from resorts around the country. But it wasn’t until early 2008 when the site expanded to allow skiers to post their own reports directly from the mountain that the site really took off.

Today the site gets 1,500 first-hand reports a day, and larger Colorado resorts, where cell phone coverage is good, may have dozens of updates on any given day.

It’s an example of how social media is changing the skiing experience. Once skiers were dependent on resorts for the snow conditions, as measured by ski patrollers before dawn and then posted online and repeated by TV and radio stations. Today, skiers can get the lowdown on the snow, traffic and lift lines on their way to the slopes or in the gondola.

“Clearly, I hope we’re able to leverage social media and the community to overall bring more accurate reports to everyone,” Brelig said.

Resort snow reports have long been the subject of grumbling over aprés-ski beers or on the ride home, but a study released last summer by two Dartmouth College professors suggested deception is widespread across the ski industry.

Comparing resort snow reports with snowfall recorded at nearby weather stations, economics professors Jonathan Zinman and Eric Zitzewitz found resorts report greater snowfall on weekends, and those within 150 miles of a major city do so more.

“Honestly I was a little surprised. You’re always a bit surprised, even when your suspicions are confirmed,” said Zitzewitz in a phone interview.

The report caused a “firestorm” among the New England skiing community, he said, and its findings are still being debated throughout the industry.

“Weather conditions can change dramatically within not only miles and sometimes feet. There can even be a portion of a ski area that gets 10 inches and another gets 1 inch,” he said.

Responded Zitzewitz: “It’s the fact the difference gets bigger on the weekends versus during the week that we view as our evidence that there’s something man-made going on.”

He pointed out there is no known meteorological phenomenon that makes it snow more on Saturdays.

The Dartmouth study also found that snow exaggeration dropped sharply at resorts where cell phone reception allowed the use of applications like skireport.com.

“This is something ski resorts are just going to have to get used to. There are a lot of people out there sharing a lot of information,” Zitzewitz said.

“It’s not only increased transparency — you could argue whether it was needed or not — but it’s also helped skiers and riders stay in tune with what’s going on at ski areas,” Hawks said.

A resort’s description of “powder/ packed powder” slopes is vague, but first-hand reports like “sweet pow in the trees off T-Bar” or “don’t come up to this rock field with your good skis” are much more informative and useful.

Of course, staying in tune can mean a lot of different things, and the firsthand reports on skireport.com have a propensity to
degenerate into namecalling and rants about Texans on the slopes or
debates about something called “gapers,” carried on beneath the veil of
anonymity. It is impossible to know if the skier raving about the
powder is a mountain marketing employee or if the snowboarder
complaining about the ice actually works for a competingresort.

Said site creator Brelig: “We try and filter the reports, but the reality is anyone can really post anything.”

He hopes to soon let people post photos directly from their phones.

A look at some of the places on the Internet you can find out
what’s happening on the mountain, and how good the skiing really is.

Anonymous postings can turn into name-calling. Reports are scant from resorts without cell phone coverage.

Twitter.com: The
Internet’s version of idle chatter is full of snow talk. Pro: Find out
what’s going on at a resort, and get pictures. Con: Many reports come
from resort PR folks, and their snow projections and condition
assessments can be overly optimistic.

Coloradopowderforecast.com: Run
by a meteorologist, the site has fun with the forecast without the
malaise of other sites. Pro: Click on a map to see the snow prediction
for your favorite mountain and see regular rankings of how right he is.
Con: Not a whole lot of reader participation.