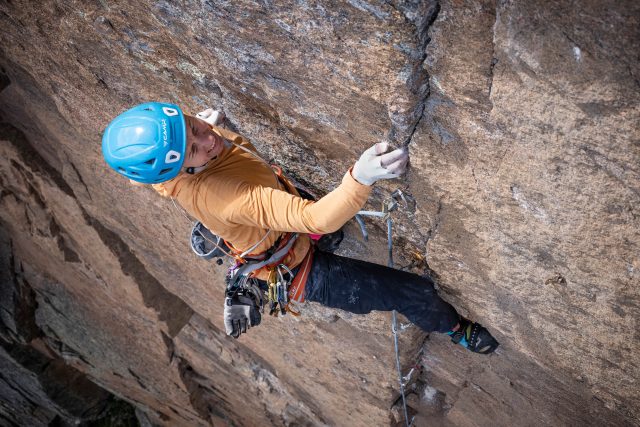 The air is thin at the 13,000-foot base of the Dunn-Westbay Direct route, a 5.14b grade climb on Longs Peak, Colorado’s northernmost 14,000-foot peak. The weather moves at a sprint. Former Boulder and current Paonia resident Madaleine Sorkin starts the day early on Aug. 10, 2022, cruising up the heinous hike to Chasm Lake to continue her project on the crown jewel of Colorado alpine climbing.

Each summer, the east face of Longs Peak, referred to as The Diamond, invites eager climbers from around the country to test themselves on the sheer vertical face which dominates the Estes Park skyline. This past summer, Sorkin became the fifth person and first woman to free climb the Dunn-Westbay Direct.

It’s only the most recent achievement in Sorkin’s storied climbing career — full of first or early free ascents on remote rock walls — which she’ll discuss at the Chautauqua Explorer’s Series on Nov. 15.

“I don’t just climb and travel in my van all the time anymore — it’s just not as fulfilling,” she explains. “I think as I’ve gotten older, choosing a bigger goal that I could really sink my teeth into has gotten more appealing.”

Her success on Longs Peak is especially notable due to the many factors that make the Dunn-Westbay unique: Its four pitches are a rope-stretching 80 meters each, and its position at 13,000 feet atop The Diamond makes it the most challenging high-altitude free climb in the world.

The Diamond has been a proving ground for climbers like Sorkin since 1960. From groundbreaking first ascents from climbers Layton Kor and Billy Westbay to modern-day free climbers such as Tommy Caldwell, The Diamond invites those who are eager for the challenge. Sorkin is no stranger to the challenges presented by Rocky Mountain National Park as she worked in the park at Colorado Mountain School as a climbing guide, taking clients to various areas including the Petit Grepon and the Cables Route on Longs Peak.

In 2021, Sorkin trudged up to The Diamond three times to work on the historically difficult line.

Sorkin decided that the Dunn-Westbay line would be a realistic goal for 2022 — she wanted to “have a love affair” with the project, as she explains it — and used the preceding year as preparation.

Sorkin’s lofty goals have led to a string of successes across the Western Rockies on some of the most formidable terrain around.

Over the past year, Sorkin enjoyed a spell of exceptional form, having repeated The Free Hallucinogen Wall in a day, graded 5.13 in the Black Canyon of the Gunnison, while also free climbing Yellow Wolf, a 1,000-foot 5.13d in Northwest Wyoming. Over the summer of 2016, Sorkin completed The Honeymoon is Over, a 5.13c also on The Diamond, making her the fifth individual and first woman to free-climb the line Tommy Caldwell first free-climbed in 2001. The winter before repeating The Free Hallucinogen Wall, Sorkin spent time replacing anchor bolts on the historic line.

Despite consistent difficulties with weather, Sorkin says her process going into the Dunn-Westbay was significantly more enjoyable than when she freed The Honeymoon is Over in 2016.

“I felt like I could have done better in terms of being healthy and really appreciating the time up there (on The Honeymoon is Over) versus being too anxious and hyper-focused on doing the route.”

In a 2015 interview on the Enormacast podcast with Chris Kalous, Sorkin said she wanted to move toward finding more enjoyment in climbing.

“At some point I want to be the climber having the most fun out there and it’s still something I grasp for,” she explained to Kalous.

Over the past six years, Sorkin has noticed a change in her mentality and has started to take more enjoyment from the process of projecting enormous objectives.

“If I look comparatively, I don’t think I’m the climber having the most fun out there,” she admits. “I think I can take myself way too seriously, but I do think [fun is] way more available to me than it used to be.”

While Sorkin has found an avenue for more fun in climbing, she still understands the weight that can be carried in day to day adventures. In 2018, with the loss of several high-profile figures in the climbing community, Sorkin and the American Alpine Club teamed up to form the Climbers Grief Fund to help connect individuals to mental health professionals and push forward conversations around grief and trauma in climbing, alpinism and ski mountaineering.

“This was motivated by a metamorphosis I was going through as a climber, and not knowing what to do with the weight of a lot of loss in my community,” she explains. “I’ve seen a lot of other climbers who had been carrying around weight and loss, and there not being nearly enough resources or shared space for grief.”

Sorkin now lives in Paonia with her wife, filmmaker Henna Taylor. As far as her next goal in climbing, Sorkin talks with reservation about potential objectives in areas such as Yosemite or Red Rocks (Nevada), but two and a half months after Dunn-Westbay she’s focusing on life outside of climbing.

“There are these times in my life where I think it’s important to kind of sit back and be a little more reflective on our nothingness after having a very fulfilling effort.”