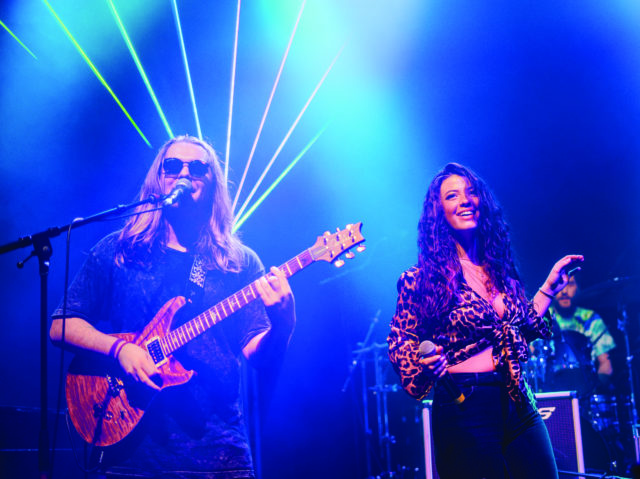 Every successful band has a story of how they got to where they are now, and the path they traveled to get there is rarely one without adaptation or struggle. It takes time and effort to manifest the dreams one desires. The Jive Tribe is a local band that has accrued some substantial attention from younger audiences in Boulder; however, it’s taken six years of changes, hard work, networking, and trial and error to get to this point.

Guitarist and vocalist Jake Leventhal has been creating music since his early adolescent years. In high school, he and two of his buddies banded together to play music that incorporated themes of classic rock, R&B and jazz. Together, they would form the first iteration of The Jive Tribe. The three of them practiced music together for years until the bass player began moving in an opposite direction, both socially and musically. Upon recognizing this split growing in the foundation of the band, Leventhal and drummer Joseph Hoffarth made the decision to branch off and do their own thing.

“Even though our old bass player was a huge part of our beginning as a band, I think when he left was when we finally started to find our sound,” Leventhal says.

Leventhal is also responsible for taking on the role of manager, booking agent and lyricist of most The Jive Tribe songs. He takes care of all the marketing and business operations, including managing finances and negotiating pay rates. These obligations take up the majority of Leventhal’s time; however, with Hoffarth growing into a role as assistant manager, there’s still a lot of room for creative fun as well.

Leventhal and Hoffarth eventually started recording at Scanhope Sound recording studio in Littleton, where they met Joel Scanlon. As the head engineer for the studio and a seasoned drummer himself, Scanlon signed on to contribute his percussive talents during recording of the album while Hoffarth put down his drum sticks and picked up the saxophone. After recording with The Jive Tribe for some time, he found himself enjoying it so much that he decided to become a permanent member of the band.

“Once he joined, things really started to take shape because he had a lot of connections,” Leventhal says.

Not long after, a young woman packed her bags and headed to Boulder to change the dynamic of the band once again, making The Jive Tribe what it is today. Sophie Engerman is a 20-year-old music major from Lake Geneva, Wisconsin, with a diverse musical background that has allowed her to make monumental contributions to the band’s sound. She started singing in her school’s choir and was involved in other productions around her area at a young age. When she hit her teens, she discovered the School of Rock program.

“Basically you sign up to be in a band with a bunch of other kids your age,” Engerman says. “You get a lesson a week and you have to go to band practice once a week and I remember it was anything from Pink Floyd and Rolling Stones covers to ’50s music.”

Through School of Rock, Engerman became interested in the idea of being in a band and became a member of a group called Chalk. With a shared passion for classic rock music, Chalk created music together for three years, performing covers at local bars and winning multiple “Battle of the Bands” contests. However, Engerman’s choir teacher in high school would inspire an unexpected shift in her practice. Her instructor encouraged Engerman to start practicing opera, igniting her interest in classical music.

“I realized I was actually really good at it,” Engerman says. “Even though I never thought I would want to be doing something like this because it seems like such a distant genre of music to kids in our generation.”

Engerman now studies opera at CU Boulder while also doubling as a part-time lead vocalist for The Jive Tribe. She met Leventhal on an app, and the two quickly discovered their shared passion for creating music. Now, Engerman, Leventhal, Scanlon, Hoffarth and keys/bassist Geoff Bremerm form the current version of The Jive Tribe. Their shared interest in rock music is what initially united them; however, with the addition of Engerman’s dynamic voice, the band finds themselves exploring new sonic territory.

“We kind of moved away from the whole rock-jammy vibe that we initially started with and are now going for a more composed, funk, soul, modern R&B sound,” Leventhal says. “The rock thing was fun but a lot of people are doing that, and it’s also not what people are really listening to these days.”

Even now, The Jive Tribe still faces multiple obstacles. Not only can school inhibit Engerman’s ability to practice and contribute to the band, but she also struggles with her split loyalty to the particular genres of music she practices. She has a shared passion for practicing classical music in school and rehearsing rock, funk and soul tunes in band practice or performances. These two passions seem to clash with one another at times in terms of stylistic approach.

“With opera, it’s kind of like a game of perfection and you realize how many components there are to singing as opposed to funk and soul and rock, where you are just belting it loudly,” Engerman says. “It has definitely changed my approach to singing but it’s kind of hard switching between the two genres because they are so different.”

Engerman maintains that she doesn’t see a need to choose between the two. Instead, she’s searching for balance. Leventhal is flexible and works around Engerman’s schedule, allowing her to be as involved as she can be without it interfering with her studies or desired leisure time. The Jive Tribe currently has 12 songs released on Spotify, have played about 58 shows and plan on releasing a new album by the end of the fall; however, everything is subject to change and the band is prepared to acclimatize accordingly.

“We still haven’t quite found our sound,” Leventhal says. “But we really hope to keep working with Sophie, contributing to the progress we make every single day and will continue to make as the music and band evolves.”