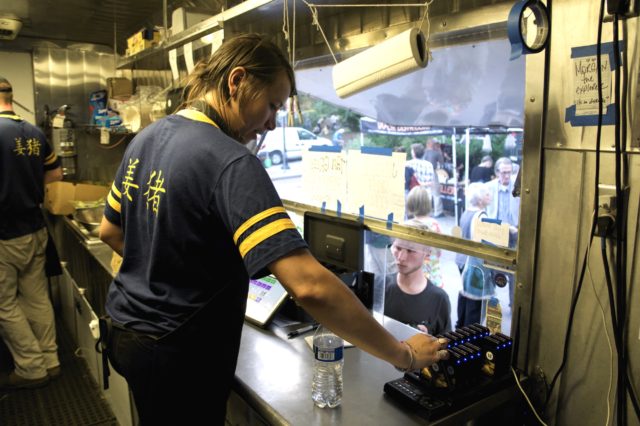 The new American dream of the culinary world was arguably birthed in 2008, when chef Roy Choi and his Koji food truck took to the streets of Los Angeles, tapping into a new hunger for up-market food on wheels and becoming the latest series of bootstrapping success stories. In those early days of celebrity chefs and reality cooking shows — back when enthusiasts called themselves “foodies” without ironic air quotes — popular interest in food was sky-high, and we couldn’t get enough of this new generation of entrepreneurs whose movements we could track on Twitter.

Over the next few years, almost every publication and network declared a “Food Truck Revolution” at one time or another, holding the truck up as the latest and greatest form of small business ownership, a literal vehicle toward financial and creative freedom. The movement definitely hit peak idealism in the 2014 movie Chef, in which Robert Downey Jr.’s character sells trucking to a recently fired, down-on-his-luck chef as the chance of a lifetime: “We’re talking about a white-on-white, ‘88 Chevy food truck,” he says. “It’s a blank canvas for your dreams.”

Today, 10 years after the first stirrings of the so-called Revolution, food trucking is more robust than ever. Eight trucks claimed the first Mobile Food Vehicle (MFV) licenses offered by the City of Boulder in 2011. In 2018, 68 MFVs are operational. However, a bit of shine has worn off the dream for experienced and now battle-tested truckers.

“Yeah, ‘Chef’? That [movie] was complete bullshit,” says Jason Scholz, owner of food trucks Street Frites and Royal Hustle. He entered the business the same year the movie opened and says that film and other romanticized depictions of the industry have led to a lot of public misconceptions. Namely, that truckers are living a Hollywood happy ending.

“There’s a lot more work involved than that,” he says of the rose-colored portrayal of food trucks as the traveling life of the party. That trucks are often found where customers are having fun only strengthens their connection to freedom, flexibility and fun in the public mind.

Scholz makes clear he loves his trucks — Street Frites revolves around gourmet fries with 11 homemade dipping sauces, and Royal Hustle specializes in tacos — and the opportunities they’ve created, but admits, “Trucking is actually grueling. … For every fun hour a consumer sees, there could be up to eight hours of prep work that made it possible.”

“Everybody talks about the movie and of course it inspired me as well,” says Natascha Hess, owner of the Ginger Pig, founded in 2016. But back in 2014, she was an attorney practicing divorce and bankruptcy law — and loathed her job. She was one of many people who answered the siren call of the food truck. “I played Division I hockey in college and I was a lawyer, so I thought, ‘I got this,’” she says, “and I do, but it’s hard. I never worked a 17- to 20-hour day as a lawyer.”

That’s right, up to 17-hour days when a service lasts no more than four hours, and herein lies the first myth to bust: that food trucking is all about cooking. Hess proved otherwise when she took me on a ride-along on a typical day, which always begins at the commissary kitchen.

Trucks certainly avoid high restaurant rents, but paying kitchen rent isn’t optional. In fact, in order to meet the license requirements for a MFV, all trucks have co-op kitchens where they store dry goods, have fridge and freezer space, and use a three-compartment sink for adequate dish-washing and sanitation.

Caught up in the idea of the freedom of mobility, I hadn’t actually considered the complications of running a restaurant on wheels, challenges like the first order of Hess’s day, loading the truck.

“To-go boxes, water, plates, dry goods. We have such limited space that we have to load often,” she says. “It almost feels like we’re going camping all the time. It’s nuts.”

In general, trucks simply aren’t designed for optimal cooking efficiency. Kitchen appliances and equipment aren’t meant to be bounced around in a metal box. And the metal box itself consumes far more energy and resources than most customers would expect.

By chance, on the day Hess volunteered to host a ride-along, the Ginger Pig’s built-in generator stopped working and Hess was sent scrambling to rent a generator for the evening’s service. The bill for both made the likelihood of a nice profit on the evening’s service slim to none before the rice started steaming or the fry oil heating.

In two years, Hess has replaced two transmissions and two engines, any one of which could have put her out of business.

“When you’re playing slim margins, a lot of money goes to repairs and the profits are ultra slim. It all has to go into it or else you can’t operate,” says John Mike Sethney, co-owner with two partners of Verde Boulder, which serves scratch-made Mexican food. Perhaps one of the shiniest success stories in the area, Verde began as a food truck — it was, in fact, one of eight trucks to obtain the first MFV licenses in Boulder in 2011 — but parlayed that success into the brick-and-mortar world, first with Verde Boulder on 28th Street and recently with a second location in Louisville.

Most customers, he explains, hear trucks are a cheaper way into the business for operators, and expect that low cost to pass on.

“They don’t understand that food trucks work their butts off, and they don’t make very much money, and that’s why the prices can be a little higher. It’s not a corporation where saving a penny on food translates to millions of dollars,” he says. “There is a lot, a lot, a lot of work that goes into it: setting up, licensing, creating recipes, marketing, social media, finding a commercial kitchen space.”

With more elbow grease than capital, most truck operators are wearing every hat and doing every job themselves, and for very little pay. Every small business owner understands the pain of the first years, when exposure can be your only paycheck, but in the case of food trucks, the small paycheck is unlikely to ever grow large.

“Could you buy real estate in Boulder, Colorado, based on a food truck salary? No,” says Sethney.

“To someone wanting to get into the food truck scene, or the restaurant business in general, I’d say it’s so many hours for everybody involved, and in most cases, there’s not a terrible ton of pay,” agrees Ryan Smith, owner of the Pepperbelly Barbecue truck. “We’re growing, but I’m not hitting the numbers where I can afford to pay for the 80-90 hours a week of help I need. Right now out of the gates, that’s what I need.”

Like most small business owners with more elbow grease than capital, he’s therefore putting in all that work himself. His Texas-style barbecue and briskets require round-the-clock attention in his offset smoker, meaning he often doesn’t go to bed for days at a time, which he knows is ultimately unsustainable.

“I was at the doctor last week,” he says. “It’s already taking a toll. Not sleeping is absolutely serious for your health.”

Freedom, with an asterisk

The regulation of food trucks has come a long way from the early days, when they were forced to operate in legal loopholes or blatantly against the law. Rules and requirements have been somewhat standardized across municipalities — though room for improvement remains — and a cherished few stable venues have opened in Boulder County, including the Rayback Collective. Still, having wheels is often a disadvantage rather than a bonus when it comes to finding crowds and making money.

“Everyone says with Boulder it’s the strictest, the hardest to set up shop with a food truck unless you’re camping out at the Rayback,” says Smith, specifically citing cities like Austin, Texas, and Portland, Oregon, that allow trucks to sell beer, facilitate truck “pods” and have fewer restrictions about truck proximity to existing restaurants.

“But in the end, I didn’t have a problem with the city,” he says, explaining that Pepperbelly found a great location in North Boulder and had started to build up regular, loyal customers. Smith thought he’d found a home, but “ran into a situation with neighbors,” he says.

“Ninety-eight percent of people were totally awesome but a couple of people made it so uncomfortable and ultimately ended up driving me out of there.”

The conflict caused Smith to lean more heavily into private parties and catering, which he says keep the business “floating.” In fact, private catering funds a surprisingly large number of food trucks. Pepperbelly estimates up to 60 percent of its business is catering some months, and Scholz says catering makes up 65 percent of Street Frites’ and Royal Hustle’s total business.

“Just sitting on the street and hoping people show up is gone,” Scholz says. “That novelty is over.”

In general, I was surprised yet again by how many food truckers are eager to put down roots, in many cases entering the MVF business with the goal of leaving it as soon as possible.

“The truck is a way to build a brand or test the brand,” says the Ginger Pig’s Hess. “If we do start a brick-and-mortar restaurant, we know people like it and we already have regulars.”

Many operators echo that sentiment, and perhaps lured into the business by the food truck American dream, they dream big. One such striver is Jorge Domingeuz, who along with his wife, Maria Domínguez — both Venezuelan immigrants — created the Arepas House food truck in 2017. Their Venezuelan arepas, grilled corn-based dough stuffed with various tasty fillings, were an instant success, helping Jorge and Maria recoupe their initial investment in only three months.

And they hit the brick-and-mortar milestone faster than most, too. Arepas House will open its first physical location at a new food hall in Sloan’s Lake, in northwest Denver, but even that accomplishment is only the beginning.

The power of the story

“It’s blood, sweat and tears — for real. I’ve had all three,” says Ginger Pig’s Hess, who works for six hours inside the super clean, super tiny kitchen of the Ginger Pig for only a four-hour service. “I’ve definitely felt like the truck has run me over sometimes.”

And yet, Hess can’t give enough love to her trucker community. Her mentor worked with her on the Ginger Pig for four months. Trucker friends have changed her lightbulbs, taught her inside tricks and watched her back. At the same time, many of those friends have gone out of business, not because their food wasn’t tasty or they had no business acumen, simply because food trucking is in many ways a stepping stone rather than a sustainable industry.

“Some great food comes out of food trucks,” says Verde’s Sethney. “It’s a way for people who have little capital to enter the market and do their own business instead of working for people who are already wealthy. I want there to be more opportunity for food trucks. I love them. They’re some of the best people.”