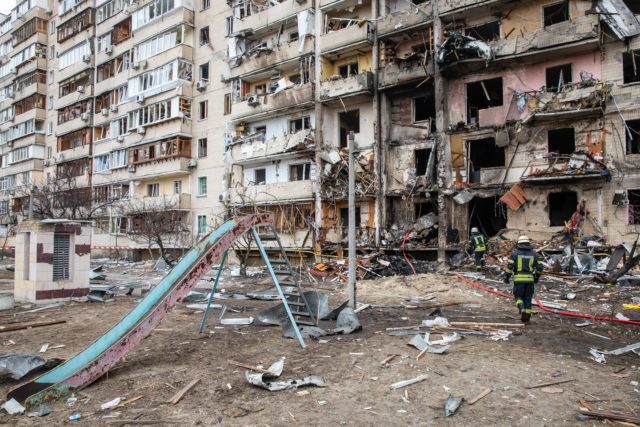 When Russia invaded Ukraine, a spontaneous non-violent, anti-war rebellion broke out in the Eastern country. Putin is now crushing any dissent with North Korean-like repression. It is striking that so many of the Russians who protested told foreign reporters how deeply ashamed they were of their country. A popular anti-war Russian rapper said he was inspired by the protests of Americans against their country’s war on Vietnam in the 1960s.

Noam Chomsky has argued that the first responsibility of U.S. citizens is to criticize our own government’s dirty deeds. In this spirit, we carried signs saying “Not in Our Name” at protests against U.S. intervention in Southeast Asia, Iraq, Chile and Central America. When Biden calls Putin a “war criminal,” we point out that George W. Bush should also have been sent to the Hague.

This goes against a certain messianic nationalism. It’s common for most politicians to say that America has a unique mission to transform the world. This exceptionalism can breed a dangerous arrogance.

It can also breed an inverted exceptionalism by a part of the left that assumes that the U.S. is always a bad actor on the world stage.

As the invasion of Ukraine began, Taras Bilous penned “A Letter to the Western Left from Kyiv” for
openDemocracy, a U.K.-based media organization. He is a Ukrainian historian and democratic socialist activist.

He criticized leftists who curiously blamed NATO for the Russian invasion. He said, “I am not a fan of NATO… I know that NATO’s eastward expansion undermined efforts directed at nuclear disarmament and forming a system of joint security. NATO tried to marginalize the role of the UN and the Organization for Security and Cooperation in Europe, and to discredit them as ‘inefficient organizations’…”

Bilous said we don’t have to support the division of the world into “spheres of influence” between imperialist states. He said the left should “struggle for a democratization of the international security order.” He supports “an overall reinforcement of the UN’s role in the resolution of armed conflicts.”

But is the threat of NATO expansion just a convenient excuse for Putin? Ukraine wasn’t going to join NATO anytime soon. In July 2021, Putin rolled out a somewhat ominous 5,000-word ethno-nationalist essay about how Ukraine is a made-up country that doesn’t have a right to exist. A number of analysts said it was a declaration of war. Since spring 2014, Russia and Ukraine had been engaged in an armed conflict that had cost over 14,000 Ukrainian lives and left millions displaced. The Kremlin occupied Ukraine’s Crimean peninsula and much of the industrial Donbas region in eastern Ukraine. Now Putin wants to swallow up all of the country.

When the Soviet bloc collapsed and the Warsaw Pact dissolved, many U.S. foreign policy establishment bigshots across the political spectrum opposed NATO expansion because they felt it would alienate the Russians. Nevertheless, the Eastern European countries voluntarily joined NATO. They had historically valid reasons for fearing the Russians. Now, after the Russian invasion of Ukraine, Finland and Sweden may join NATO.

Putin’s apologists on the left and the far-right blather on about NATO, but don’t mention the Budapest Memorandum. After the Soviet Union dissolved in 1991, Ukraine declared independence with huge popular support. One third of the Soviet nuclear arsenal was on Ukraine territory.

In 1994,  Ukraine gave up all its nukes and signed the Nuclear Non-Proliferation Treaty (NPT). What did they get in return? In exchange, the United States, the United Kingdom and Russia then signed the Budapest Memorandum pledging to “respect Ukrainian independence and sovereignty in the existing borders and refrain from the threat or the use of force against Ukraine.”

The NPT is a legally binding document. With regard to the Budapest Memorandum, Ukraine first sought legally binding guarantees from the U.S. that it would intervene should Ukraine’s sovereignty be breached. The U.S. would only agree to weaker politically binding security guarantees. China and France also later extended similar assurances to Ukraine, but didn’t sign the memo.

Russia first broke its commitments under the memorandum in 2014, with its annexation of  Crimea and aggression in eastern Ukraine. Of course, the memo is a sick joke now as Russia pulverizes Ukraine and actually threatens nuclear war.

The left’s confusion and division over Ukraine is profoundly sad. We need something like the anti-fascist popular front of the 1940s to stop Putin’s war and help the Russian people end Putin’s regime.