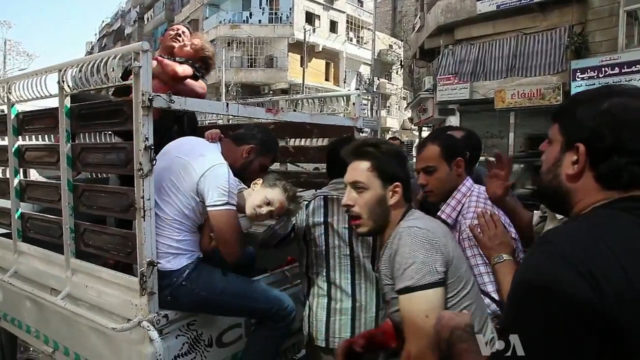 When Turkey invaded Syria, there was almost universal condemnation across the political spectrum. But the most unique protesters are the anarchists all over the planet who say that a new egalitarian society is being created in Rojava, the semi-autonomous Kurdish region in northeast Syria.

Shortly after the invasion, an international campaign called “Rise Up For Rojava’” was formed (riseup4rojava.org/). The campaign declares:

“Seven years ago a revolution began in Rojava that was to radically change the lives of millions of people. The Kurds liberated themselves from the dictatorship of the Assad regime and began to organize themselves in self-governed councils, communes and cooperatives. In particular, the autonomous organization of women became the driving force behind the social revolution. Over the course of the struggle against the Islamic state, a unique multi-ethnic and multi-religious project developed, which today guarantees the peaceful coexistence of millions of Kurds, Arabs and Christians. The Democratic Federation of Northeast Syria is a unique example of the vision of a peaceful and democratic Middle East and has therefore always been a thorn in the side of both regional powers and imperialist states.”

The Rojava project is the brainchild of Abdullah Öcalan, the founder of the Kurdistan Workers’ Party (PKK). The Turkish based party adopted authoritarian Marxist Leninist politics and initiated a campaign of armed conflict against the Turkish government in 1984 in order to create an independent Kurdish state. The PKK attacked government forces as well as civilians.

In 1980, Öcalan fled his home in Turkey and turned up in Syria. The regime of Hafez al-Assad allowed him to set up guerrilla training camps. The PKK directed attacks on Turkey from Syrian soil. In 1997, the U.S. declared the PKK a terrorist organization and the next year Assad kicked Öcalan out and he went to various countries until Turkish intelligence, with the help of the CIA, captured him in Kenya.

Öcalan was sentenced to death for treason and separatism. The sentence was commuted to life imprisonment. Turkey had to do that since it wants to enter the European Union. In order for a nation to become an EU member, it has to abolish the death penalty.

In prison, Öcalan has been an insatiable reader and has been inspired by social theorists such as Michel Foucault and Immanuel Wallerstein. But he has been particularly influenced by a little known anarchist philosopher in Vermont named Murray Bookchin. Öcalan liked Bookchin’s ideology of “communalism” which proposed a social order where central governments would be replaced by loose federations of autonomous communities. Öcalan’s manifesto of “Democratic Confederalism” merged Bookchin’s ideas with the emerging Kurdish feminist movement.

Mother Jones reporter Shane Bauer describes what this looks like in practice:

“It’s difficult to overstate how radically politics have been transformed in Rojava since its ‘self-administration’ was formed in 2013. Rather than revolving around a single strongman or a central authority, the territory is organized into cantons, largely self-governing regions with their own decision-making councils and institutions…

“Each canton is split into neighborhood or village communes. …One that I visited encompassed 257 homes. Every two years, its residents elect a man and a woman who manage neighborhood concerns and meet with the co-chairs of other communes to address community issues. The commune sold gas for heating and cooking, managed health care, developed local economic projects, and helped reconcile neighborhood disputes. One commune I visited had recently helped reconcile a marital dispute and set up nighttime patrols to improve safety. Another was planning to install streetlights.”

Bauer says there has been a feminist social transformation:

“Probably the most dramatic effect of the Rojava revolution has been its impact on women. Every public institution, from communes to courts to canton ministries, is chaired by a man and a woman. The cantons require that at least 40 percent of all political positions are held by women. While Syrian law is based on Shariah, Rojava’s ‘social contract’ separates religion and state. It has abolished forced marriage, polygamy, and child marriage…”

But this utopia was built in hell. The Kurds remembered that they had been betrayed many times by the U.S. in the past but hoped that this time would be different. They were appreciated by the U.S. troops who worked with them. The U.S. military concluded that the Syrian Kurds were the most reliable and toughest fighters in the battle against ISIS. The Kurds, backed by U.S. air power, took back nearly all the land seized by Islamic State fighters since 2014. They lost 11,000 troops in the fighting and have seen another 20,000 wounded.

We have to get out of the endless wars but we need to seek peaceful diplomatic solutions with other nations. Trump’s sudden and brazen green-lighting of Turkey’s invasion was immoral, idiotic and dangerous.

this opinion column does not
necessarily reflect the views of Boulder Weekly.