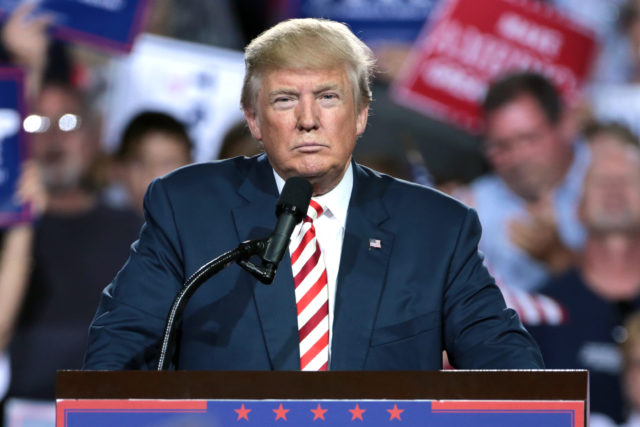 According to a story in the Washington Post, House Democrats want the whistleblower, whose complaint is the pretext for their impeachment inquiry, to testify before their investigating committees as anonymously as a wise guy turning state’s evidence against the mafia.

The story, which appeared in the Post’s Oct. 7 edition, says the steps under consideration “include having the whistleblower testify from a remote location and obscuring the individual’s appearance and voice.”

The story cites “three officials familiar with the deliberations” as its sources — all anonymous.

“There are lots of different protocols and procedures we’re looking into to find out what works and doesn’t work to protect the identity of the whistleblower. That is paramount,” an (anonymous) official familiar with the talks told the paper.

“The officials spoke on the condition of anonymity to speak frankly,” the Post added brightly.

Why the need for anonymity?

House Democrats are concerned “that without such rare precautions for the whistleblower,” Republicans on the House Intelligence Committee could learn and then leak his name.

“In the House, Democrats overseeing the logistics of the testimony for the House impeachment inquiry are leaning toward a staff-only session that would prevent lawmakers from attending and asking questions, according to officials familiar with the conversations,” the Post reported.

“Aides have even considered having the whistleblower testify from a separate location via a video hookup in which the camera would obscure the whistleblower’s image and alter his voice, possibly with modification technology.

“Two other possibilities include having the whistleblower sit behind a screen or partition, or conducting audio-only testimony,” according to the Post.

Let me see if I understand this correctly.

The pretext for impeaching Trump is a complaint from an anonymous whistleblower whose brief is based on second- and third-hand information — also from anonymous sources.

Democrats not only want to keep the whistleblower’s identity secret, they want him to testify without any Republicans in the room who might have the temerity to ask him inconvenient questions — like when did he start colluding with Adam Schiff and did he have a working relationship with one of the 2020 Democrat presidential candidates?

The whistleblower’s lawyers say the reason they want to keep his identity secret is they are afraid his life might be in danger if it’s made public. More likely it’s his credibility that would be in danger. Once his cover is blown, he can expect his life and everything that happened in it to be scrutinized and dissected down to the molecular level.

As well it should be. The guy is trying to get the president of the United States impeached and the results of the 2016 election overturned. It takes a lot of chutzpah to demand anonymity when you’re trying to overthrow the government.

But what in the name of sanity are the Democrats thinking? If their inquiry goes forward without T. Whistle Blower testifying under oath in public, and without Republican members of the intelligence committee being allowed to question him, the impeachment inquiry transmogrifies into a latter-day star chamber inquisition. It’s hard to think of a faster and more certain way to delegitimize the investigation in the eyes of the American people.

The U.S. has a quaint tradition of allowing people accused of a crime to confront and question their accusers. The secret process Schiff and his fellow witch hunters want to use is a deliberate attempt to deny those rights to Trump — and a brazen attack on the rule of law.

But what about the substance on the whistleblower’s complaint — that Trump broke the law during a phone conversation with Ukrainian President Volodymyr Zelensky by asking him to investigate Biden and his kid, and threatening to withhold military aid if he didn’t do so?

Trump claims he was asking the president of Ukraine only to look into corruption, not — repeat, not — fishing for dirt on Biden.

That much is hard to credit.

It doesn’t take a genius to see that uncovering dirt on Biden would help Trump’s 2020 campaign regardless of motive. Of course he was looking for dirt on Biden. But that’s different from coercing Ukraine into giving it to him. Trump didn’t threaten Zelensky, and he didn’t offer an arms-for-dirt quid pro quo. He asked for a favor.

And since the dirt on Biden was out there in plain sight, Trump wasn’t asking for much of one. Biden is on tape bragging about how he used a threat to withhold aid to Ukraine to get a Ukrainian prosecutor fired; the prosecutor was investigating an energy company that was providing Biden’s son Hunter with a $600,000 a year sinecure to sit on its board and pretend he knew something about the oil and gas business, presumably in exchange for access to Joe.

Trump’s motives for investigating it may be impure, but Joe’s corruption is real.

The call seemed pretty non-threatening to anyone who didn’t have an advanced case of Trump Derangement Syndrome, which explains why Schiff and his pals are working overtime to portray it as something sinister.

The Democrats’ inquiry isn’t about “high crimes and misdemeanors.” It’s about getting rid of Trump by any means possible. Ukraine is just the latest pretext. The fact that the Democrats need to take the testimony of their star witness in a star chamber speaks volumes about the true nature of their game.

A lot of Republicans think the Democrats are trying to pull off a soft coup d’état to undo the outcome of the 2016 election. Me too.

This column does not necessarily reflect the views of Boulder Weekly.